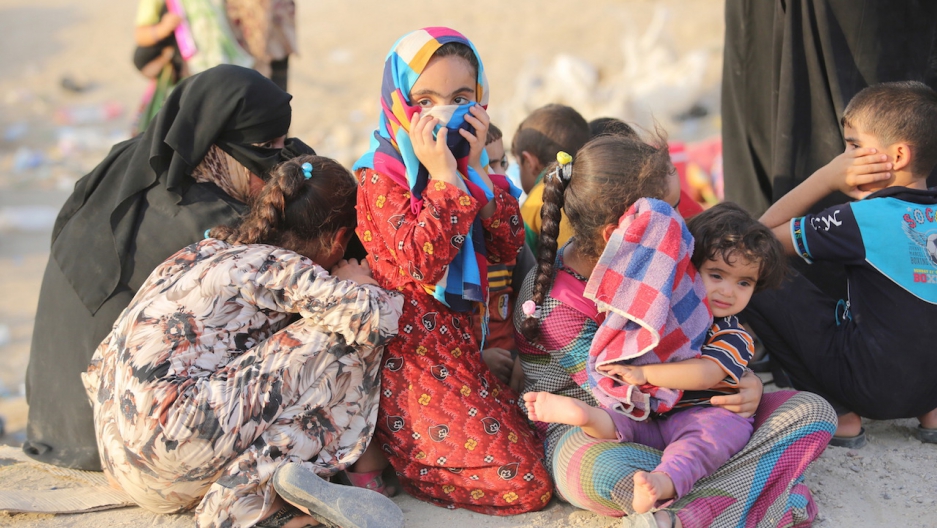 Displaced Sunni people, who fled the violence from Saqlawiyah, near Falluja, arrive in the town of Khalidiya, north of Baghdad, July 15, 2015.

When journalist Ramita Navai was on a reporting trip inside Iraq last year, she heard a number that struck her: 643.

That’s how many men and boys have gone missing from Saqlawiyah, an Iraqi town 45 miles from Baghdad, locals there told Navai as she filmed Iraq Uncovered, a new FRONTLINE documentary premiering Tues., March 21.

The alleged kidnappers? They’re not ISIS members. Rather, locals told Navai, they’re the militia group that drove ISIS from the town.

“They said they would give them back soon, and now it’s been four months,” one woman who fled Saqlawiyah tells Navai about her missing male relatives in the above excerpt from Iraq Uncovered. “I just want them to tell me if they’re dead or alive.”

“I have 11 people missing from Saqlawiyah — my sons, brothers, husband, brother-in-law and uncle,” another woman says, crying.

In Iraq Uncovered, Navai makes a dangerous and revealing journey inside areas of the war-torn country where few journalists have gone — investigating allegations of abuse of Sunni Muslim civilians by powerful Shiite militias in areas like Saqlawiyah where ISIS has been pushed out.

The militias have been a crucial part of Iraq’s fight against ISIS, and are supposed to answer to the prime minister. But as Navai reports, some of the Shiite forces battling ISIS have themselves been accused of atrocities — including kidnapping, imprisoning, torturing and killing Sunni men and boys. ISIS aligns itself with its own violent version of Sunni Islam, and Shiite militias — like the Hezbollah Brigades, the militia that drove ISIS out of Saqlawiyah last summer — often see Sunni civilians as ISIS suspects.

As a result, for some Iraqi civilians, the terror doesn’t end once ISIS leaves town, Navai finds — a fact that raises troubling questions about the future of Iraq after ISIS.

“Even though ISIS has lost ground in Iraq, people in refugee camps here tell us that they’re as scared of the militias as they are of ISIS, and they’ve been warned by the militias that they can never return home,” says Navai.

For more on the power of the militias and their role in the fight against ISIS, including how the Iraqi government is responding to alleged militia abuses, watch Iraq Uncovered Tues., March 21 on PBS (check local listings) or online starting at 10 p.m. EST / 9 p.m. CST.