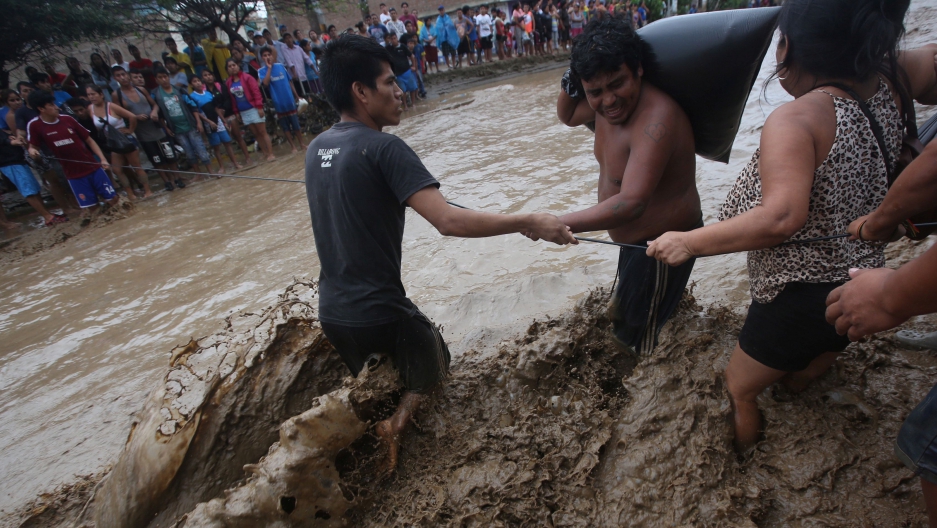 Residents cross a flooded street after a massive landslide and flood in Trujillo, northern Peru, on March 19, 2017.

Peru is expected to experience another two weeks of highly unusual torrential rains, which have already caused devastating floods along large swaths of its arid coast, destroying homes and crops and killing an estimated 75 people.

The precipitation has been caused by what scientists call a “coastal El Niño,” a localized version of the hemispherewide condition. Unusually warm waters just off the Andean nation’s Pacific shore — up to 50 degrees warmer than normal — have triggered the rains in the world’s second-highest mountain range.

The extreme runoff has, in turn, caused devastating problems, above all in Peru’s northern regions, particularly Piura, near the frontier with Ecuador. Downtown areas of several cities, including Piura, and Trujillo, which is Peru’s second-largest urban center, have been underwater for days now.

Meanwhile, up to half a million people have been severely affected. They include some of Peru’s poorest, who made the fatal mistake of squatting on land beside gulches and canyons that open from the Andes onto the coastal plane.

These areas may have been bone-dry for years and even decades. In the space of a few short hours last week, they suddenly turned into raging torrents, sweeping away entire shantytowns, and, in some cases, their residents along with them.

In one memorable scene captured on a cellphone video, a woman emerged from a landslide covered in mud after being swept two miles from the field where she was working.

Evangelina Chamorro Díaz was subsequently released from the hospital with only minor physical injuries, although she was said to have been traumatized by the ordeal, during which she expected to die.

Ironically, in the capital, Lima, the problem ended up being too little water, rather than too much. SEDAPAL, the local water authority, saw its treatment plants overwhelmed by unprecedented volumes of water, heavy with sediment, debris and trash.

As a result, water supplies in this city of 10 million people were cut almost entirely, without notice, from Thursday evening to Monday afternoon. That prompted long queues in the 80-degree heat as municipal water trucks stopped at street corners to fill buckets, bottles and even plastic bathtubs for locals. There were some reports of scuffles and fights in some of the worst-affected neighborhoods.

There has also been a rush on bottled water in supermarkets while the prices of some food staples have soared, with roads into Lima and other major population centers along the coast having been cut off.

The government of President Pedro Pablo Kuczynski appears to have responded well to the crisis, with ministers promptly fanning out to the affected areas. Meanwhile, the president, widely known here as PPK, has been sending out text messages to all of the country’s cellphone users.

Those messages implore people to use water responsibly and promise that both electricity and food supplies will be unaffected. “Stay calm,” the president urged on Tuesday.

Many more affluent Peruvians have also been donating clothing, food and bottled water for those who have lost their homes. As the rains continue, Peru’s ability to respond to this national crisis will likely be tested even further.