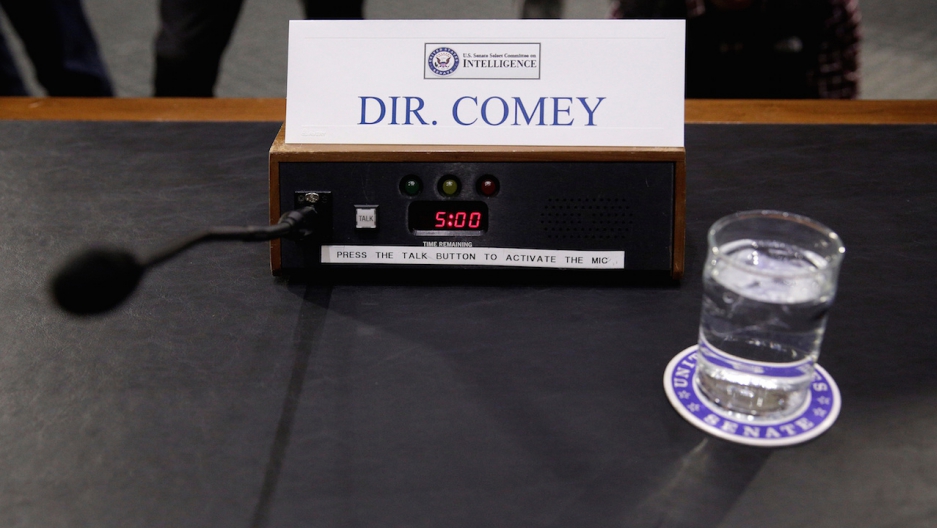 On Monday, the powerful FBI chief lobbed another bombshell into the world of US politics — this time directed at the sitting president, Donald Trump.

In a high-stakes congressional hearing followed live by millions in America and around the world, Comey flatly rejected Trump's explosive claim that he was wiretapped by his predecessor Barack Obama.

Comey delivered his assessment without a blink, telling lawmakers neither the Federal Bureau of Investigation nor the Justice Department had evidence to support such allegations.

Intensely concentrated, with furrowed brow, the towering Comey — he stands 6'8" (two meters) tall — took the heat during a marathon first public hearing on the issue of Russian meddling in last year's election, and Trump's unsubstantiated allegations of wiretapping.

The 56-year-old projected the cool demeanor of a veteran public official throughout the marathon hearing, during which he confirmed for the first time that his agency is investigating Russia's alleged election interference and notably Moscow's possible collusion with Trump's campaign.

But the FBI chief, who has been in his post since September 2013, is also a highly-skilled political operator, who knows his words carry weight.

The Democrat Clinton learned that the hard way, when Comey called a surprise press conference last July to deliver a dressing-down over her use of a private email server that reverberated all the way to the November polls.

Comey angered Republicans by deciding not to press charges against the former secretary of state. But Clinton, to this day, believes that Comey's public berating of her, followed by a last-minute intervention resurrecting the controversy in October, cost her the election.

When Trump decided to keep the Obama appointee in his job, it raised eyebrows from critics who saw it as a tacit reward for the part he played in damaging Clinton's chances.

But the FBI chief increasingly looks to be a thorn in the president's side.

Comey has now set his sights on the issue of Russian election meddling, which has stalked Trump's young presidency.

And if there is one character trait the FBI chief is known for, it is tenacity.

Comey locked horns relentlessly with Silicon Valley as he sought to convince Apple to unlock a smartphone used by the perpetrator of a terror attack in California. The FBI's own experts ended up breaking into the device.

Under Obama, Comey repeatedly stole the spotlight from his boss, former attorney general Loretta Lynch, who was reduced in the Clinton case to announcing she was following his advice not to press charges.

The burning-hot Clinton investigation — which saw Comey assailed on all sides — did much to cement his reputation as a straight shooter, as well as thrust him into the public eye.

But Comey has been circulating in political and legal circles at the highest level for three decades, giving him the confidence to challenge the country's justice department, and even the White House.

In the wake of the 2014 fatal police shooting of unarmed black teen Michael Brown in Ferguson, Missouri, Comey raised hackles by supporting cops who were wary of fulfilling their duties, for fear of their actions being caught on video.

Many top US government careers begin in New York, and Comey is no exception — he hails from the Manhattan suburbs. He cut his teeth as a federal prosecutor in New York and the Washington area.

The following year, he faced one of his toughest showdowns, confirming his reputation for being independent and unafraid.

Comey had become acting attorney general due to the illness of his boss John Ashcroft.

At Ashcroft's bedside, the presidential counsel to George W. Bush, Alberto Gonzales, was trying to persuade him to reauthorize a controversial warrantless eavesdropping program.

Comey — who was against extending the program — later revealed the incident to senators, unleashing a political firestorm