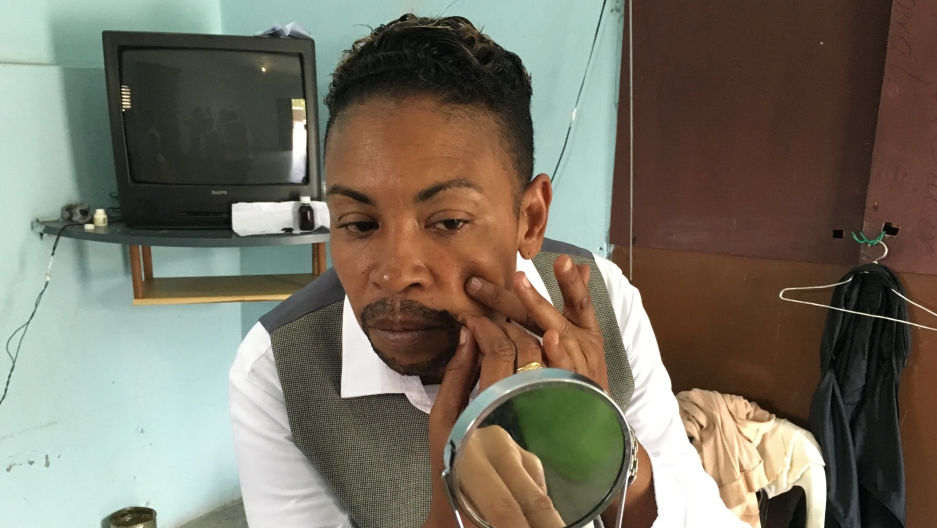 Ana, of the Cuarteto Habana, transforms to her male persona before a show at the Mantilla Cultural Center.

At a recent bolero concert at Havana’s Cine Acapulco, emcee and lead crooner, Alberto, had the audience entranced. He poked fun at himself and them. He also recited a love poem. Later, three other dapper men joined Alberto onstage, and together, they sang traditional Cuban love songs.

The group, Cuarteto Habana, is actually made up of four women who identify as lesbian or bisexual; they transform themselves into men to perform songs, the odd poem and some stand-up comedy. It’s akin to a drag show, and there is growing acceptance of the performers, said Addis Darlington Dickinson, who heads up a government network that protects the rights of lesbians and bisexuals in Havana.

“Broadly speaking, it’s a show, a cultural offering,” Dickinson said. The performers call themselves transformistas, which literally translates as "one who transforms."

Offstage, Alberto is Argelia Fellové Hernández, and she is the leader of the quartet. She is also a papier-mâché artist and a sexual health educator. But transforming into Alberto and performing is what she loves doing most.

“The main premise of my work is to empower women, to give visibility to women,” Hernández said. “[I] do this through art.”

Alberto and the quartet don’t just sing, they pepper the show with LGBT rights messages and messages about protecting young girls. The show is art, Hernández said, but it’s also activism.

“They will know that behind this man they see acting for them is a woman, like so many women worldwide who are fighting against homophobia, biphobia, fighting so there is no violence against girls.”

Hernández lives in a tiny, two-bedroom wooden house. She lives with her partner, Ana, who is also a transformista, and Ana's elderly father who is suffering from dementia. They don’t have a fridge, so they have to cook and eat everything on a daily basis. Doing the drag show doesn’t pay much, so sometimes, to earn extra money, Hernández and her partner accept more mainstream gigs as male singers. But occasionally, there's a catch. 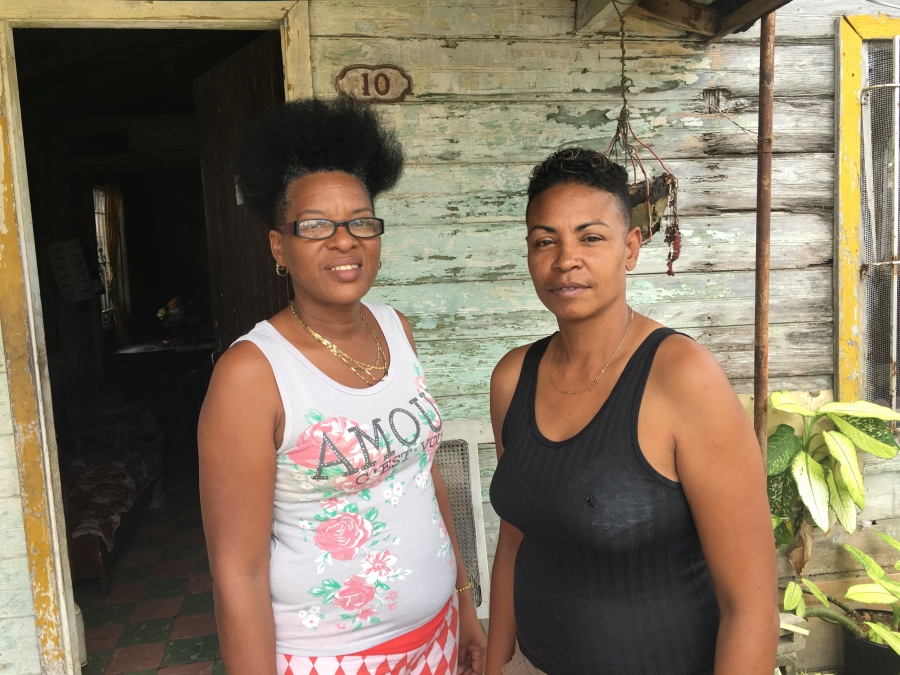 Argelia Fellové Hernández and her partner, Ana, are pictured outside their small home in the outer Havana neighborhood of Mantilla.

“They never, never, never tell the audience that we are actually women,” Hernández said. “We change and leave after the show and the audience doesn’t even know that we were the performers. It’s not what we want, but it pays us, and while we don’t agree with their ideology of not telling the audience, we get a lot of visibility when we perform. And hopefully, one day we’ll break through that.”

Transformismo shows also happen in the middle of busy streets around Havana. Here, guerilla theater meets spontaneous drag show. On the busy Calle Reina in central Havana, another transformista, who goes by Miriam, does her show.

“I’m a transformista who is known for stopping traffic on Reina,” Miriam said. “I know it’s kind of dangerous, but because of it, I’m famous.”

Miriam’s show literally involves strutting out into oncoming traffic, straddling the double yellow lines in the middle of the street and posing and dancing. The street is her stage.

“My whole life, I’ve wanted to dress as a woman and my family always accepted me, they weren’t critical,” Miriam said. “But because of machismo, some men don’t accept people like me. Yet the reality is that society and even the planet have come around to see that this isn’t some kind of sickness, it’s our destiny.”

Miriam prances, weaves and ducks between traffic like she is on her own private catwalk-cum-stage. Passersby call out their appreciation. Cars honk their horns. 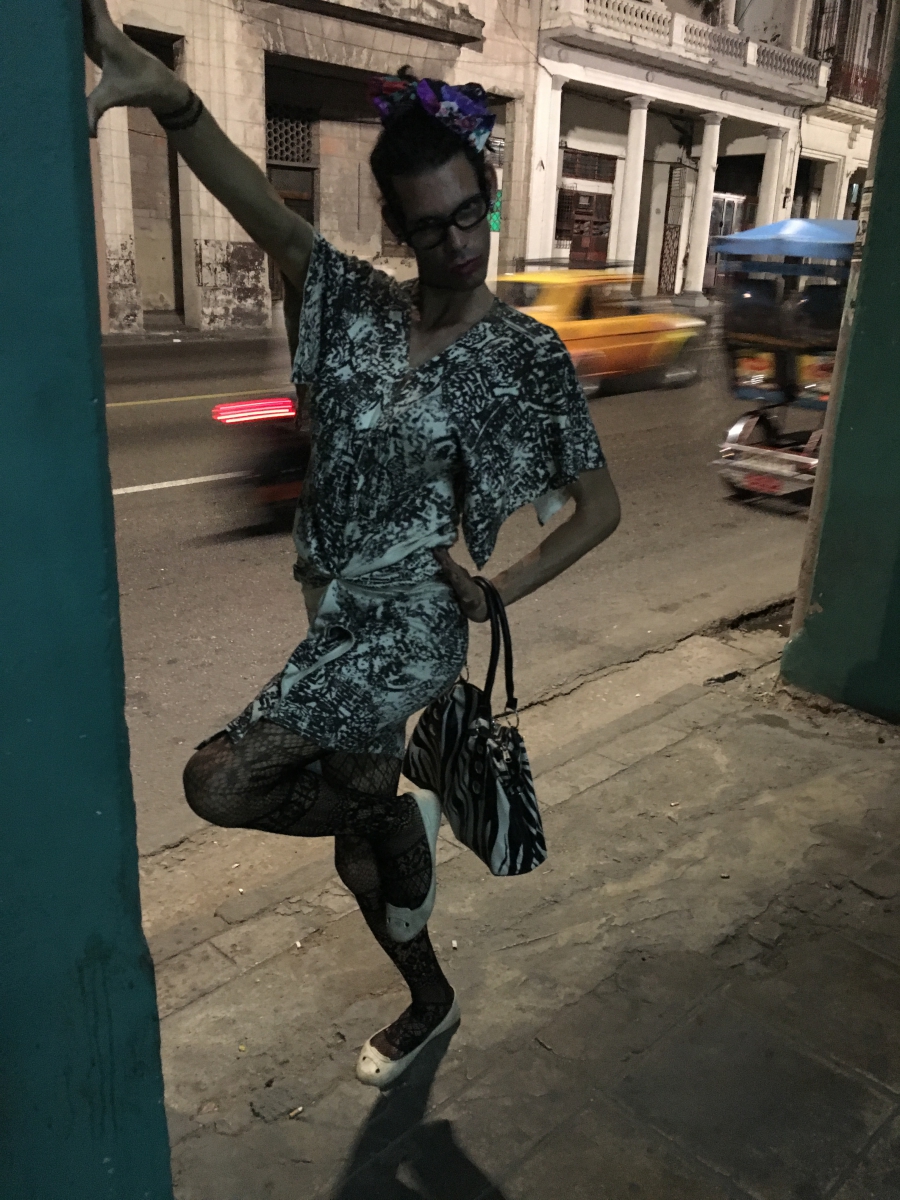 Dickinson, the LGBT advocate, said transformistas are not new in Cuba, but their shows are becoming more public. In Havana, she said, there is much greater acceptance of cross-dressing than in some of the more rural provinces. In Camagüey, for example, transformistas don’t really perform in clubs or theaters like they do in Havana. There, transformistas mostly perform by invitation at private parties.

There's still plenty of work to be done on this front, though. Dickinson interviewed transformistas around the country, and the majority said they feel discriminated against not so much in society, but rather, inside the LGBT movement. It’s something she hopes will soon change.

“A transformista movement can happen,” she said. “Today, there are individuals doing it, but they are not yet a movement.”

That's probably why Hernández, the transformista known as Alberto, turns inward before shows. “It’s really important that before we perform, we free ourselves from conversation, we support each other by holding hands, we share energy and make ourselves strong before we go out in front of everyone,” she said.

For her, the process of transforming is meditative. She uses hair from her own head, finely cut, to stick on her face to form a beard. She’s deeply quiet during the process.

The Cuarteto Habana performed recently on a Sunday afternoon at the Mantilla Cultural Center before a crowd of families and older people. The audience was glued to Alberto; he’s suave, a charmer. Hernández hopes her art will challenge people's conceptions of gender in a society steeped in defined gender roles.