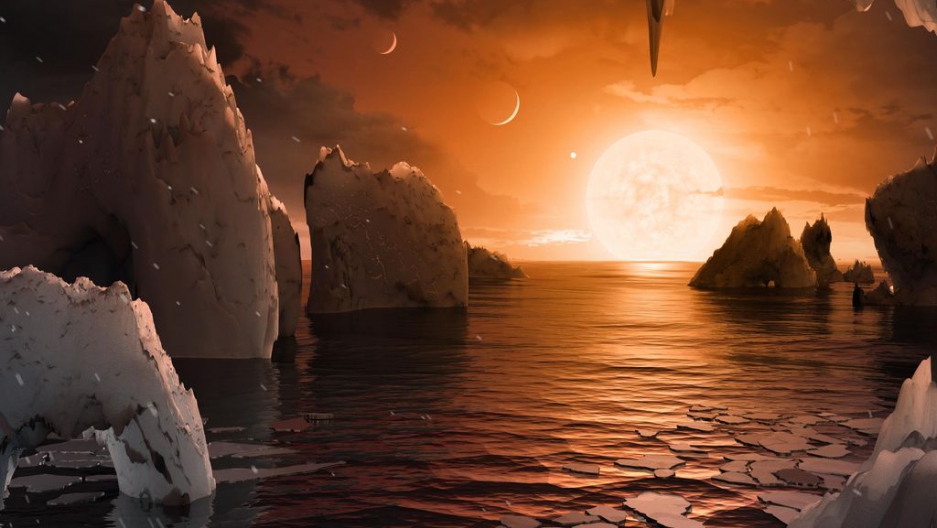 An artist’s rendering of the surface of exoplanet TRAPPIST-1f, one of seven recently discovered in the TRAPPIST-1 solar system, is pictured here.

NASA was big on the internet in late February, when it announced that scientists had discovered seven Earth-sized exoplanets orbiting an ultra-cool dwarf star, 40 light-years away.

The planets are closer to their cool star than Mercury is to the sun, and scientists think they could all be temperate enough to hold liquid water — a key ingredient for life. Not surprisingly, the scientific community is abuzz about what the planets hold, water and otherwise.

“Is there life on those planets? I'd say that's what I'm most curious about,” says Sara Seager, an exoplanet researcher at Massachusetts Institute of Technology. “But that kind of science-fiction type of thoughts aside, really it's like, what are these planets?”

“I mean, are they like Mercury? Have they lost their atmospheres due to the craziness of the star? Or are they really just, you know, nice worlds like Earth, with oceans and continents and clouds and things like that. I think even just knowing the very nature of these planets is what we're itching to get at.”

The planets orbit a star called TRAPPIST-1, which lies in the constellation Aquarius. TRAPPIST-1 is much smaller than our own sun — just larger than Jupiter, actually — and its size made it a logical place to look for new planets, Seager says. “It's easier to find small planets around small stars than it is small planets around sun-like stars.”

Excitement about the planets began mounting last May, when scientists announced they had detected three of them orbiting the star. To find them, they used the “transit method,” looking for dips in the brightness of TRAPPIST-1 caused by a planet passing between the star and their telescope.

Then, scientists used the Spitzer Space Telescope to take another look at the system over a period of 20 days. This time, they counted not three, but seven Earth-sized planets in orbit around the star.

For the scientific community, detecting the planets is just the first step in a long process of discovery. “We have no idea whether they're going to be like Earth or not,” Seager admits. Determining whether any of them have water will tell us much more — which she says we can eventually test for, by examining their atmospheres for water vapor.

“If there are intelligent beings elsewhere that are looking back at us, perhaps they're on their own radio show today saying, ‘Hey, we just found three planets, three Earth-sized planets,’ and they'd be thinking of Venus, Earth and Mars,” Seager says.

“Mars is actually pretty small, but at this point, that would be the equivalent. It's like, ‘Wow, we found all these planets, they're all Earth-size, some are in the habitable zone.’ But we need a further look to really narrow it down.”

Scientists have already trained the Hubble and Kepler space telescopes on the TRAPPIST-1 system. According to NASA, they’re scanning it for puffy, hydrogen-packed planetary atmospheres, and even other planets. And when the James Webb Space Telescope goes online in 2018, it could reveal even more about the planets’ temperatures and atmospheric makeup.

In the meantime, there’s lots of work to be done. “In the short term, I'm sure there will be a flurry of speculative research papers on pretty much every topic — from how they formed, to whether or not they have atmospheres, to what the chances for life are,” Seager says.

There are also plenty more planetary systems to be discovered elsewhere in the sky — and that’s where we can help. Planet Hunters, a citizen science project from the online platform Zooniverse, is a treasure trove of data from the Kepler telescope. The project asks volunteers to scan stars using transit techniques, similar to those used to find the planets orbiting TRAPPIST-1.

“Whether you're a 5-year-old or a 95-year-old, our ability to recognize patterns is really sophisticated,” says Laura Trouille, director of citizen science for Zooniverse. “You can just go on to the site, look at a light curve, just how light changes over time and look for dips.”

According to Trouille, the project has already uncovered a few new worlds. “Through that process a couple of years ago now, some of the volunteers on Planet Hunters saw a four-star system with planets around it, and that was the first of its kind,” she says.

The volunteers, she adds, “were part of the analysis and very much co-authors on the paper.”

This article is based on an interview that aired on PRI's Science Friday. More information about the Planet Hunters citizen science project is available at www.planethunters.org.