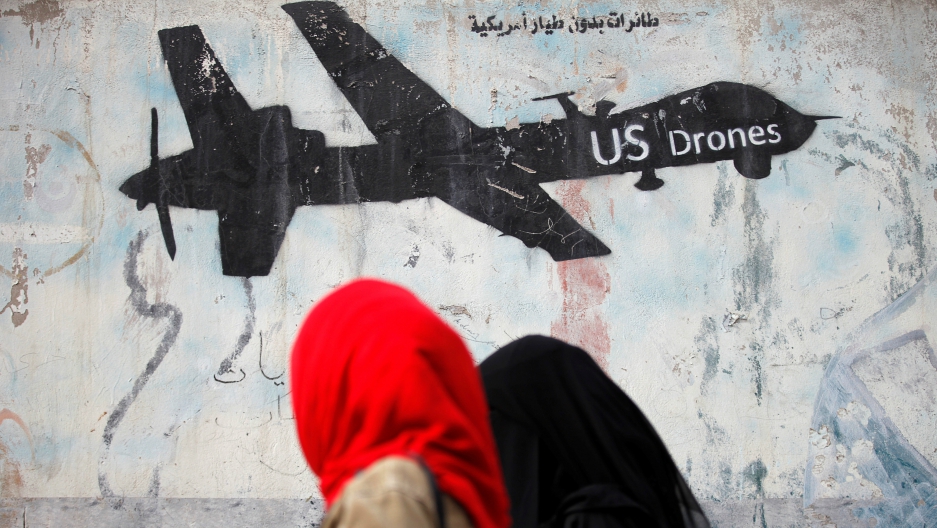 Women walk past graffiti denouncing strikes by US drones in Yemen, painted on a wall in Sanaa, Yemen, February 6, 2017.

#56. @realDonaldTrump, is it important to you to limit civilian deaths in US military operations? #100Days100Qs

Whenever the United States deploys military force overseas, there will be debates — some public and some operational — about whether and under what conditions civilian casualties can be justified.

Those debates took place during the presidency of Barack Obama, who directed airstrikes in Afghanistan, Iraq, Libya, Pakistan, Somalia, Syria and Yemen in which civilians were killed. And they're continuing under President Donald Trump, who has already faced controversy over civilian casualties in a Yemen counterterrorism raid and in US-led bombings against ISIS in Iraq and Syria.

Trump has said many things that would be worrying for anyone concerned unncessary civilian deaths. He's suggested he'd be open to using a nuclear weapon. His insistence that he'd "bomb the shit out of" ISIS didn't sound like something you'd hear from a commander-in-chief who's especially worried about collateral damage. In one case, he even encouraged killing civilians when he called for targeting the families of suspected terrorists.

Trump has already looked to roll back some of the procedures the Obama administration used to try to limit civilian deaths. He has designated parts of Yemen "an area of active hostilities," which gives the US military more latititude to conduct strikes that could kill civilians. (Obama had required that airstrikes in places without that designation could only take place if there was "near certainty" no civilians would be killed and if the target presented an imminent threat to the US.) The New York Times reports Trump officials are considering making the same designation in parts of Somalia.

The new administration has already faced questions about whether it's doing enough to limit civilian casualties.

A late-January counterterrorism raid in Yemen led by Navy SEALs left one SEAL and two dozen civilians dead, including several women and children. Among those killed was American citizen Noor al-Awlaki, the 8-year-old daughter of Anwar al-Awlaki, an American Muslim cleric and accused al-Qaeda operative who was killed by a US drone in 2011.

And now, Trump's Pentagon is embroiled in new controversy over an airstrike that killed more than 40 people Thursday at a mosque in Aleppo, Syria. Most of the dead were civilians, according to the Syrian Observatory for Human Rights. US military officials at first denied conducting the strike, but later admitted conducting a strike against al-Qaeda militants in the area.

“We are going to look into any allegations of civilian casualties in relation to this strike,” a spokesperson for US Central Command said.

Trump is now proposing a 10 percent increase to the defense budget. The question is: Will his beefed-up military be one with looser rules of engagement.

So, Mr. President, is it important to you to limit civilian casualties in US military operations? Click here to tweet this question to the president.