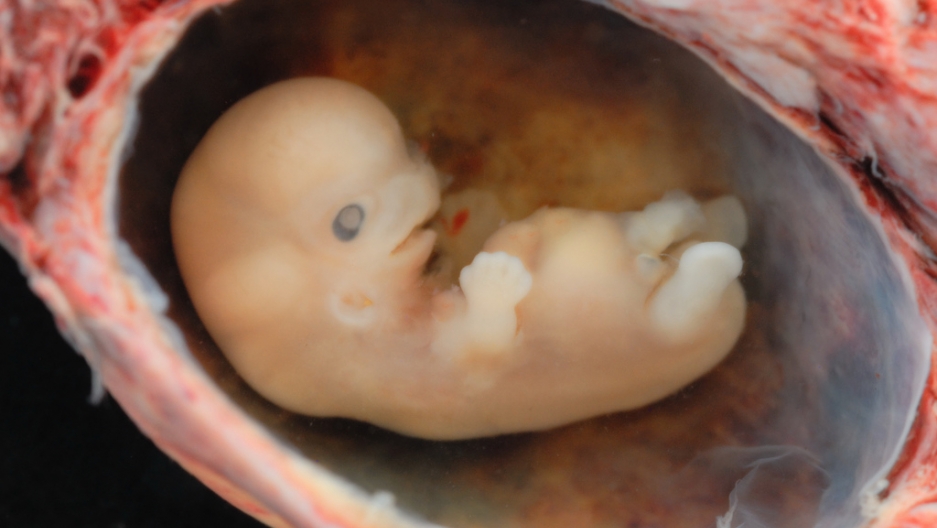 A human embryo is shown here.

Last month, the National Academy of Sciences and the National Academy of Medicine released a report about the use of gene editing techniques like CRISPR on human embryos. The new report, coming from two globally respected scientific organizations, suggests the technique could be warranted in certain cases — not just in the laboratory, but in real life.

In an article for Science magazine, staff writer Jocelyn Kaiser called the report a “yellow light” for embryonic gene editing, which has long been off the table in the United States. That’s because when it comes to editing human embryos, there are thorny ethical concerns on both sides of the debate — and according to Kaiser, the report’s authors proceed cautiously.

“So, what the report says, is, there are many reasons why we need to be very careful about editing the human germline — that is, making changes to eggs or sperm or embryos that could be passed on to the next generation,” Kaiser says.

“There are a few rare instances where we may want to do it,” she explains, “and that is families that have a severe genetic disease that they are going to pass on to their child, but they can't prevent it any other way, that we might want to allow [gene editing] to happen in those cases.”

Although genetic editing could protect embryos from devastating medical conditions, Kaiser says that many people worry its application wouldn’t end there.

“If we do let it happen, then it could sort of open the door to many other changes to embryos that we would not maybe feel so comfortable with,” she says. “Like modifying an embryo to make it a better athlete, or make it smarter, or have blue eyes, or whatever.”

Those potential “designer edits” bring up issues of access. “What about the people who didn't have the ability to do this?” Kaiser wonders. “Would they be left out?” Not only that, the effects of embryonic edits would ripple through generations.

“If you change the DNA of an embryo versus an adult or a child, that change will be passed on to that embryo’s descendants,” she says. “That's something you couldn't stop once you've done it. It's going to be passed on.”

“And so that's one reason why people are worried about doing this. Do you want to start tinkering with our genes in that way?”

We might not get much choice: Scientists in China have already reported genetically editing embryos. Ultimately, Kaiser says, the national academies’ report is not binding — it’s  just advice. “Not only to the United States, but to other countries. And they can decide if they want to follow the advice.”

“But … these are very respected bodies, and when they offer their advice on something, it will it will have a lot of influence.”