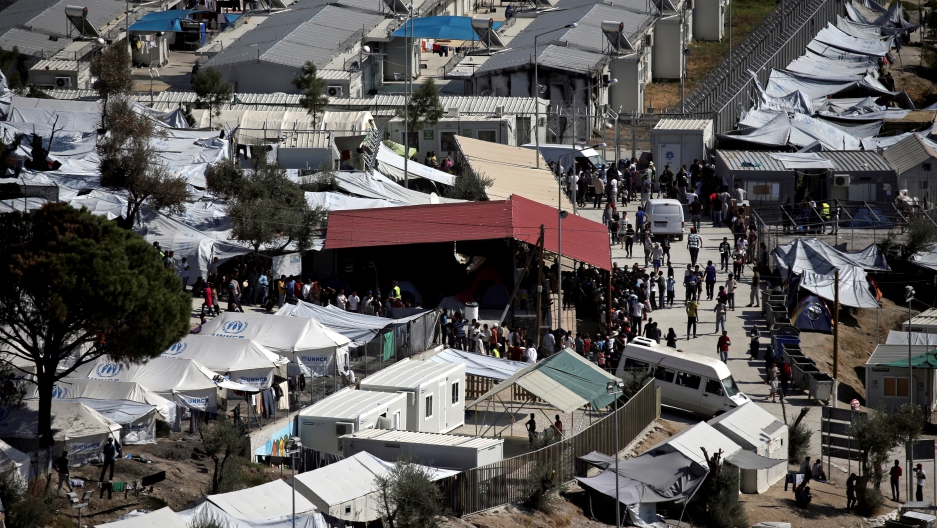 Refugees and migrants line up for food distribution at the Moria migrant camp on the island of Lesbos, Greece, October 6, 2016.

Somali refugee Abdulaziz says he is "suffocating" in an overcrowded camp on the Greek island of Lesbos, where he shares a tent with a dozen other Africans.

The 30-something resident of the Moria camp had been hoping to reach Germany when he set off on his journey, but instead is stuck on this Greek island off Turkey's western coast waiting for his asylum claim to process.

"It's like a prison here. ... I'm suffocating," said Abdulaziz who has been languishing in the camp for the past eight months.

"There is always someone screaming, always fights," said Abdulaziz, who was injured in the leg while fleeing from Turkish police.

He is just one of the thousands of migrants and refugees stranded on Greek islands a year after Turkey signed a landmark agreement with the European Union to substantially reduce migrant flows.

In the agreement, which took effect two days later, Ankara pledged to take back all illegal migrants landing in Greece in order to help stem migrant flows to the EU.

The deal helped put the brakes on a massive influx of migrants and refugees, especially from Syria, Iraq and Afghanistan, which had mushroomed into a combustible political and social issue in Europe.

Turkey's pledge, in exchange for more aid, visa-free travel and the speeding up of Ankara's long-stalled EU accession talks, was also aimed at deterring migrants from making the perilous sea crossing in the first place, knowing they could be sent back.

Some 1,183 migrants were returned to Turkey in the year ending in January, Greek police figures show.

But, along with a series of border closures in the Balkans and eastern Europe last year, the EU-Turkey deal has transformed the Greek islands into vast holding pens for refugees and migrants.

Many of the camps are overcrowded and there are frequent clashes, with those inside tired of the long wait for asylum papers and fearful of being returned to Turkey.

On Lesbos, there are nearly 5,000 people in camps nominally built to hold 3,500, according to government figures.

The Greek immigration ministry has refused to permit large-scale relocation from the islands to the mainland, fearing that such a move could jeopardise the EU-Turkey agreement that has helped stem further arrivals to the continent.

Conditions at Moria, a camp that has long been plagued by poor living standards and overcrowding, have improved, said Achilleas Tzemos, a field coordinator with Doctors Without Borders (MSF).

The relocation of the most vulnerable, including unaccompanied migrant children and torture victims, has accelerated with at least 10,000 moved elsewhere, according to the UNHCR. But those who stay suffer with uncertainty at the very least.

"Not knowing what awaits them subjects them to a great deal of fear," Tzemos said.

According to MSF there has been a "sharp increase" in self-mutilations and suicide attempts.

In the past year, 851 people whose asylum claims were rejected or who simply gave up, were returned to Turkey, according to Greek police figures.

Even people entitled to international protection gave up, lawyers said, because they didn't understand the procedural mechanisms, or because they needed to escape the misery of the camps.

"Information is essential" for refugees, said Philip Worthington, a project coordinator at the European Lawyers association in Lesbos.

During one asylum interview, he said an Iraqi exile highlighted his qualities as a truck driver rather than the persecutions he suffered because of his Christian religion.

The EU is starting to cope with the situation, which refugees' rights organisations have criticised as a humanitarian scandal.

Rising tensions between residents and migrants, media images of flimsy tents crushed under heavy snow falls, and the deaths of three migrants at the Moria camp in January, for reasons still unclear, have galvanised Greek authorities.

The war of words between the EU and Turkey over the migrant deal has escalated in recent days after Ankara blasted Germany and the Netherlands for preventing Turkish ministers from campaigning ahead of a key April referendum.

The EU said it expects Turkey to honor the deal after Ankara threatened to bin it.