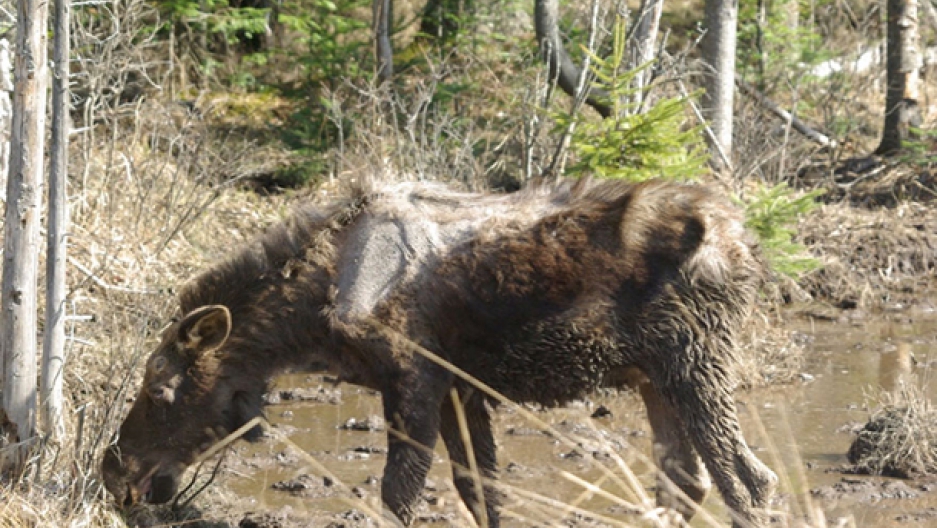 Heavy tick infestations are killing Moose calves in large numbers in New Hampshire and Maine because of their small size and inability to replenish lost blood.

The mild winter weather in New England is bad news for the region's moose.

In northern New England, moose number about 70,000, but changing weather seems to be throwing the balance of nature off-kilter, giving an edge to one of the animal's most dangerous enemies — bloodsucking ticks.

This has alarmed moose researchers, including Professor Peter Pekins, who is the chairman of the Natural Resources and Environment Department at the University of New Hampshire.

For the past three years, New Hampshire and Maine — through the university — have been following well over a hundred moose that are captured each January. Researchers measure the mortality rate and the “productivity” of these animals. (Productivity refers to the number of calves produced per cow and the survival of those calves over time.) During those three years, both states have averaged around 70 percent mortality of calves and lower-than-expected productivity from adults, Professor Pekins says — and the cause is clear.

“The rise in mortality and drop in productivity have been 99 percent associated with extreme, heavy loads of the winter tick, a parasite of moose,” Pekins says. “The tick load the calves are carrying eventually results in their death. This death occurs in late March through mid-April — probably 85 percent of the deaths occur at that time — and that's directly associated with the adult female tick taking her blood meal, which can be 2 to 4 milliliters of blood per tick.” 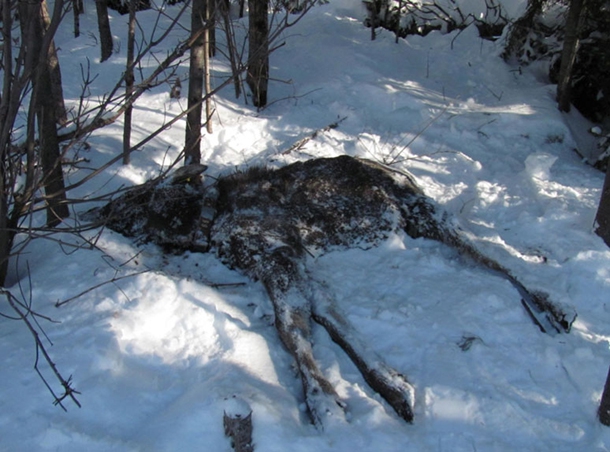 Moose calves are most likely to succumb to ticks in late winter.

Researchers are finding extraordinarily high numbers of ticks on stricken calves: about 35,000 to 95,000 ticks per hide.

“In general, if you're over 30,000 ticks, you're going to have a problem,” Pekins says. “So, these animals die from acute anemia and massive weight loss, because they simply can't replace this blood loss volume that quickly.”

Adult moose are also not in optimal condition, Pekins says. Ten years ago, about 30 percent of yearling females were breeding. Now, almost none are breeding. “It’s my hypothesis that this is the physiological penalty they pay for a high tick load. They don't pay with their life, but they pay with their productivity, and this is all contributing to the decline in the population."

Pekins says two fundamental occurrences combine to create high mortality and low productivity: a very high moose density and “cooperative” weather — that is, weather that favors the ticks over the moose.

“Over time, as our weather patterns have changed, it's not surprising that we would have these [mortality] events,” Pekins says. “But to have three in a row was really unprecedented in our knowledge of this host-parasite system.”

Wildlife officials have few options available to them to change the situation.

“You can hope the weather changes,” Pekins says. “Some people have strong beliefs that climate change is not real, so the argument [from them] would be to have as many animals left on the landscape [as possible], so that a larger population would be there to respond when winter starts occurring around the first week in November again. [But] there’s a growing proportion of the human population that doesn't think winter begins in November anymore in New England. The change is very real.”

For Pekins, this basically means either accepting the current reality or taking the only practical proactive approach, which would be to “institute a higher harvest to bring down the density of moose.” That could effectively break the unhealthy host-parasite relationship, reduce the mortality of calves and increase the relative health and condition of the adult moose, he says.

The type of harvest Pekins envisions could be done "in a reasonably conservative manner, if a state or agency decided to go that route," he says. "I personally think that there would be a bit of a social outcry about that because it's a very counterintuitive approach to what is clearly a slow decline in a population."