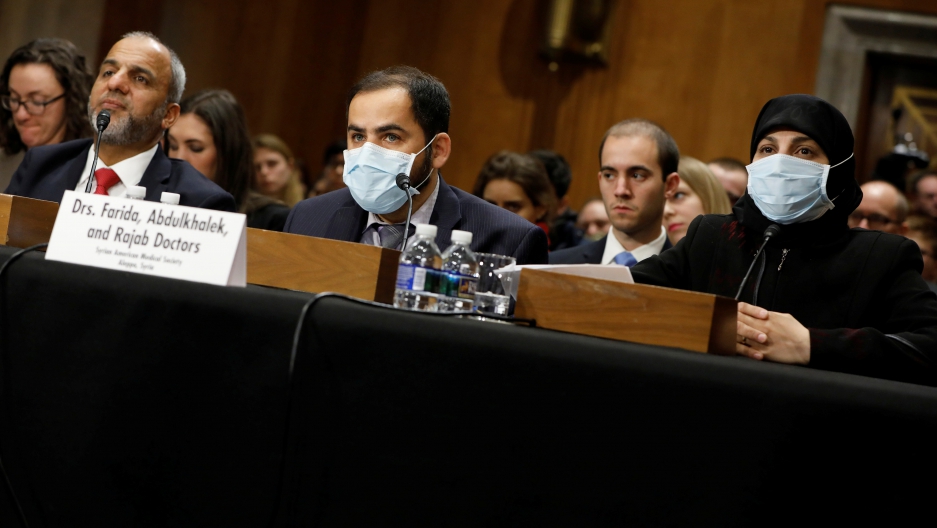 Syrian Drs. Abdulkhalek (center) and Farida (right) wore surgical masks to protect their identities when they testified before a US Senate Committee on Foreign Relations hearing. They use a single name for security reasons.

Imagine you're the parent of a small child, living in a home where explosions have shattered the windows.

Then imagine that you have to leave that child each day, because you're one of the few physicians left at your hospital and countless patients rely on you during a military siege.

That was the dilemma facing two Syrian doctors last year, as they struggled to parent their 8-year-old daughter while also pulling late-night shifts in the overwhelmed operating rooms of eastern Aleppo.

Some days were better than others, according to obstetrician Dr. Farida. She uses only one name for security reasons. On one occasion she was attending to patients when she heard airplanes overhead and the thuds of explosions nearby. Someone told her that her daughter's school might be under attack.

"I run there with my operation dress, running like a crazy man there. And then I look at the school and I find no one was there," Farida says.

As it turned out, teachers had learned about the attack in advance and evacuated the students before the bombing.

It was just one of dozens of traumas Farida and her opthamologist husband Dr. Abdulkhalek faced during the bombardment of Aleppo in late 2016. They were among a handful of physicians who remained in the city last year, long past the time when most everyone with means had fled.

Then in December, troops loyal to Syrian President Bashar al-Assad defeated the rebels who controlled the city's eastern neighborhoods. Civilians were ordered out of the town. Dr. Farida, her husband and daughter fled to Idlib, where they live today.

But the two doctors haven't given up advocating on behalf of their patients. The couple traveled to Washington this week to testify before the Senate Foreign Relations Committee on the need to provide humanitarian aid to northern Syria.

Dr. Farida recounted for lawmakers how she was performing a cesarean section in Aleppo last year when a missile struck her facility.

"There was dust and small stones all around the room. ... The patient's abdomen was full of debris," she says. "Many times we had many accidents like this. One day the general surgeon was performing an operation and ... a wall dropped down and they had to go, leaving the patient alone in that room. When it was better, and the airplane gone away, then they go back to the room and they take the patient out of the hospital and they complete the operation in another hospital."

Farida's husband, Dr. Abdulkhalek, was the sole opthamologist in eastern Aleppo. He says he treated dozens of patients with shrapnel lodged in their eyes. Many, he laments, were blinded. One of his most difficult days came during a chlorine gas attack in December, when the hospital had only one canister of oxygen to treat a group of children.

"We had to transfer the mask between these children to give everyone a little amount of oxygen," he remembers.

During their testimony before US Congress, both physicians pleaded with lawmakers to boost aid to nongovernmental organizations working with displaced Syrians.

In the meantime, although they're safer in northern Syria, they continue to worry about their young daughter.

"We are afraid for her future," Abdulkhalek says. "She sees nightmares."

But the family is building a new life amid the displaced in Idlib. Farida has already found a job. Abdulkhalek is looking forward to employment soon. And the two doctors continue to work with the Syrian American Medical Society, also known as SAMS.