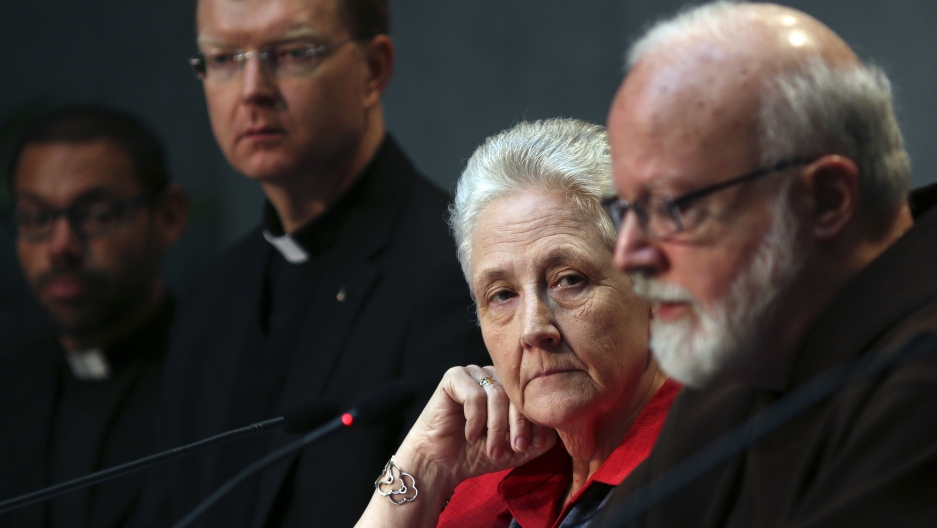 Marie Collins (2nd from right), who served as a memer of the Pontifical Commission for the Protection of Minors, watches as Cardinal Sean Patrick O'Malley (right) speaks during their briefing at the Holy See’s press office at the Vatican in Rome on May 3, 2014.

When Pope Francis named two victims of clergy sexual abuse to a new Vatican commission on the protection of minors in 2014, some observers took it as a sign that the pope was getting serious about the issue.

But Marie Collins says there was still some skepticism.

“A lot of people felt that I was just being asked [to join] the commission as a sort of token survivor,” says Collins, who was sexually abused as a child by a Catholic priest in Ireland. “I wanted to be sure that the commission was sincere.”

Collins went ahead and joined the Vatican commission. If there was a chance for finding solutions to this problem in the Catholic Church, she wanted to be part of it.

Nearly three years later, however, Collins decided she had to resign. She officially stepped down from the Pontifical Commission for the Protection of Minors on March 1, which was also Ash Wednesday.

Collins says the work being done by the members of the commission to protect children and vulnerable adults, and to find justice for survivors like herself, is all very important.

“Everyone on the commission [was] working very hard for that,” Collins says. “That was good. But the response from the Vatican, not so good.”

In a written statement about her decision to step down from the commission, Collins said, “I find it impossible to listen to public statements about the deep concern in the Church for the care of those whose lives have been blighted by abuse, yet to watch privately as a congregation in the Vatican refuses to even acknowledge their letters!”

“It is a reflection of how this whole abuse crisis in the Church has been handled: with fine words in public and contrary actions behind closed doors.”

Collins says the Vatican bureaucracy was slow to fund the commission’s work and to grant access to officials, and that she is not entirely sure why.

“There are still those in the Vatican,” Collins says, “that have the old attitudes and the old views towards anyone coming in from the outside, as they would see it, telling them what to do. They don’t like it.”

“Although the pope has backed initiatives put forward by the commission, they haven’t actually turned into reality. So, what we have now still is words and no actions.”

Some leaders within the Vatican want things to change, says Paul Vallely, author of “Pope Francis: The Struggle for the Soul of Catholicism.”

Among them, Vallely says, is Cardinal Sean O’Malley, who is the archbishop of Boston and the head of the Vatican commission on protecting minors. “He’s working pretty hard behind the scenes to get movement, but he’s being blocked by other people in the Vatican,” Vallely says.

Vallely adds that there is a risk in the approach taken by Pope Francis. On the one hand, the pope has talked about “zero tolerance” for Catholic clergy who’ve sexually abused children.

“He talks about setting up a tribunal to discipline bishops who fail to act on abuser priests. But then, he doesn’t actually enforce these things,” he says.

Particularly egregious to some observers, Vallely says, was the appointment by Pope Francis of a bishop in Chile with a dubious record when it comes to child abuse. That sort of thing, Vallely says, does not amount to “zero tolerance.”

The Vatican commission on child protection is expected to continue its work. In addition to Collins, the second member who was also a victim of sex abuse is Peter Saunders. But he was put on a leave of absence after having disagreements with his fellow commission members and becoming increasingly critical of Pope Francis.

Vallely says Pope Francis could decide to take the recommendations from the commission and implement them. For example, he says the pope could tell Vatican authorities to put members of the Catholic clergy suspected of sexual abuse of children in front of new tribunals.

But so far, that does not appear to be happening.

“There are lots of things he could do, if he wanted to act decisively on this, as he has in other areas of his papacy,” Vallely says.

The foot-dragging inside the Vatican could be about politics, turf wars or resistance to the pope, says Collins, the former commission member, adding, “Maybe [Pope Francis] could have been stronger." But in any case, she says the holdup is simply unacceptable.

“We haven’t seen any accountability really. You’ve seen one or two people maybe being allowed to resign, but even then, it’s all to avoid scandal. You don’t see people removed, and I’m talking about bishops.”

“It’s depressing, it’s dispiriting, it’s frustrating. In 2017, it should not be still happening,” Collins says. “Accountability is the main issue, because if there’s some consequence for not protecting children properly, then you might see better protection.”