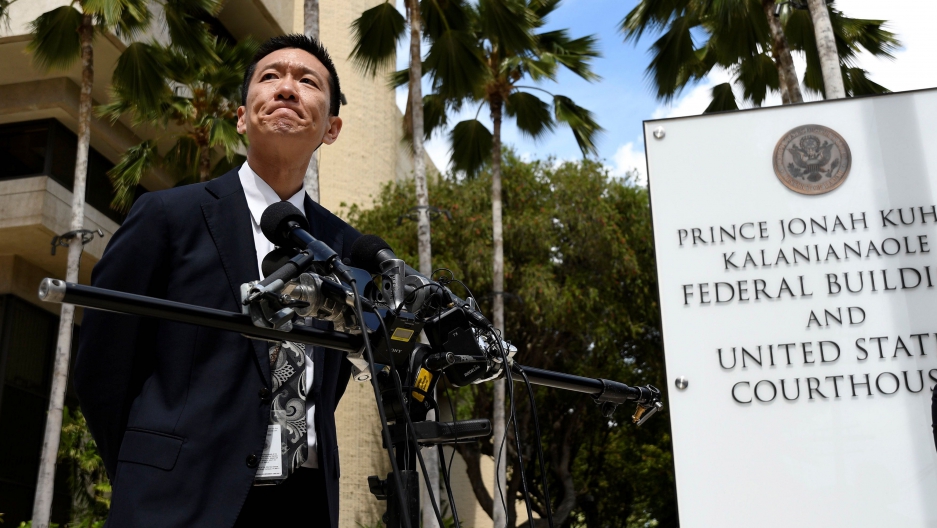 Hawaii Attorney General Douglas Chin answers questions from the media at the US District Court 9th Circuit after presenting his arguments after filing an amended lawsuit against President Donald Trump's new travel ban in Honolulu on March 15, 2017.

President Donald Trump braced Thursday for a long legal battle over his ban on travel from six mainly-Muslim countries after two federal judges ruled against the measure, saying the Republican's own comments suggested religious bias.

It was a humiliating setback for Trump, who saw his first attempt at limiting travel from the Muslim world halted by the federal courts last month after it had caused chaos at airports both in the US and abroad.

The Republican leader vowed to fight the "terrible" decision, to the Supreme Court if necessary, describing it as "unprecedented judicial overreach." He has said the measure is needed to ensure national security.

The revamped executive order had been due to take effect at midnight Eastern time, but a federal judge in Hawaii froze Trump's efforts to close US borders to nationals of Iran, Libya, Somalia, Sudan, Syria and Yemen for 90 days.

The judge's ruling on Wednesday also halted a 120-day suspension of the US refugee admissions program.

A second federal judge in Maryland issued a separate, more narrow nationwide block on just the core provision concerning travel from the Muslim world, ruling it would cause "irreparable harm" were it to go into effect.

Trump, who used anti-Muslim rhetoric on the campaign trail in his successful run for the White House, will now have to account for those statements in court, with both judges saying the order raised the specter of religious bias.

Questioned about Trump's tweets and statements during the presidential campaign in which he promised to enact a "Muslim ban," Wall said: "There is a difference between a president and a candidate."

But District Judge Derrick Watson said "a reasonable, objective observer... would conclude that the Executive Order was issued with a purpose to disfavor a particular religion, in spite of its stated, religiously neutral purpose."

Watson indicated that the court would not stay its decision in the event of an appeal, meaning the ban cannot go ahead as planned on Thursday regardless of any action the White House takes.

In Maryland, US District Judge Theodore Chuang echoed that thought, as he issued a partial injunction on a separate complaint filed by advocacy groups claiming that the amended order discriminates against Muslims.

"While the travel ban bears no resemblance to any response to a national security risk in recent history, it bears a clear resemblance to the precise action that President Trump described as effectuating his Muslim ban," he said.

'We are going to win'

"The law in the Constitution gave the president the power to suspend immigration when he deems it to be in the national interest of our country," he said.

The Justice Department called the Hawaii ruling "flawed both in reasoning and in scope."

The Hawaii and Maryland rulings came after a trio of hearings Wednesday on the ban.

In Seattle, Washington state's attorney general filed an emergency motion for a temporary restraining order that would last up to 14 days in order to halt the travel restrictions, also citing "irreparable injuries."

The revised ban signed by Trump behind closed doors on March 6 had a reduced scope, exempting Iraqis, permanent US residents and valid visa holders — an effort by the administration to ensure the order passed legal muster.

The White House said the other six countries were targeted because their screening and information capabilities could not meet US security requirements.

But Watson rejected the White House claim that the order wasn't a Muslim ban, ruling that it was plausible "to conclude that targeting these countries likewise targets Islam" given their Muslim populations all topped 90 percent.

The judge made reference to several examples of Trump explicitly framing proposed action on immigration in religious tones, including a March 2016 interview during which the then president-elect said: "I think Islam hates us."

Three strikes and you're out?

Rights groups and states contesting the ban welcomed the rulings.

"The Constitution has once again put the brakes on President Trump's disgraceful and discriminatory ban," said Omar Jadwat, director of the immigrant rights project at the American Civil Liberties Union.

New York Attorney General Eric Schneiderman, who has joined the case in Washington state, said: "Today's order by the federal District Court of Hawaii marks yet another victory for the Constitution and the rule of law."

"President Trump and his advisers should think long and hard before trying to impose a travel ban a third time. They may strike out," he said.