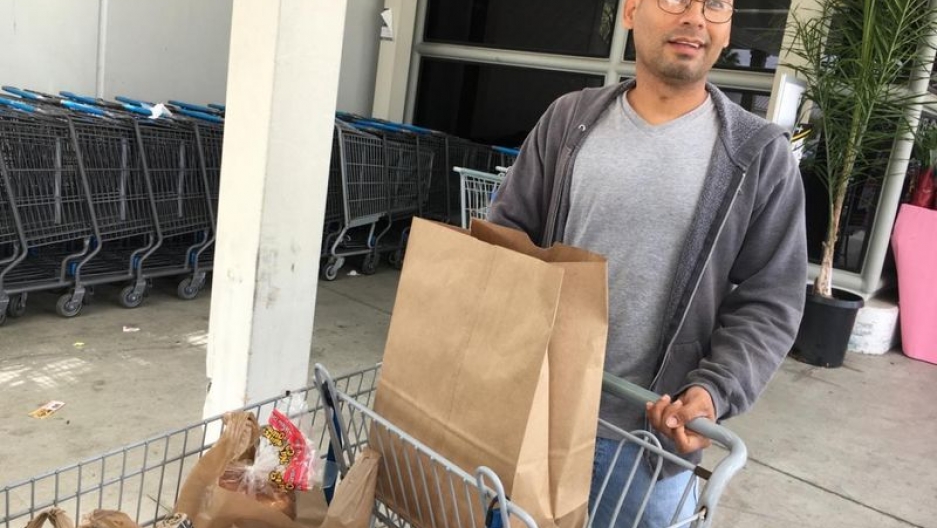 Isidro Villela is in the Army National Guard. He said he does most of his shopping at the military commissary at Los Angeles Air Force Base for his wife and two children, saving about $75 each visit.

Military commissaries, the discount grocery stores found on US bases around the world, are bracing for big changes as lawmakers and the Department of Defense seek to reduce their reliance on taxpayer funds.

The stores offer low prices for service members and retirees. But taxpayers pay more than a billion dollars a year to subsidize them.

The reforms were set in motion by a law passed late last year. The commissaries are considered a military benefit for service members and their families.

"It really helps to protect the commissary benefit if we can show our colleagues in Congress that the amount of taxpayer funds that has to be put into this system is being reduced," Rep. Mac Thornberry of Texas, chair of the House Armed Services Committee, who helped shape the legislation.

For decades, the commissaries have sold goods at cost plus a 5 percent surcharge, which allowed military families to save about 24 percent compared to other retailers, according to the Defense Commissary Agency. Federal funds supplemented the cost of doing business. Last year, that amount was $1.4 billion.

But the idea now is to make the commissaries more self-sufficient in the long-run, said Thornberry. And the law requires that the savings to taxpayers don't cut into the discount to service members.

"The cost of potato chips may go up, the cost of bananas may go down, but at the end of the day, the benefit for families must be at least as good as it is now," he said.

But striking that balance — maintaining a benefit that many military families and veterans count on while reducing public funds — may be tough to achieve, said some economists and military family advocates.

Prices, selection among the first changes

The changes are scheduled to hit stores as early as this month.

The first reform is called variable pricing, said Christopher Burns, the executive director of Business Transformation at the Defense Commissary Agency. Instead of one global price, the commissaries will follow seven different regions in the US, allowing them to be more competitive.

The Agency hopes the pricing change will pave the way for the second big change: The introduction of a private label brands to the stores.

With both changes, Burns said, the agency will follow "guardrails" set by Congress, meaning the reforms will not cut into baseline savings that military families get from shopping at the stores.

But some military family advocates are still concerned.

"Especially for families in remote or high-cost locations or families living overseas, it's a very valuable benefit and really vital to their well-being," said Eileen Huck, government relations deputy director at the National Military Family Association and an active duty Navy spouse.

Huck said she's worried that changing how commissaries operate could fundamentally alter what they're all about.

"If your priority as an organization is generating revenue, you're going to make different choices than if you're simply delivering this low-cost grocery benefit to military families," she said.

Some economists are also raising alarm.

"I don't think you can maintain everything the way it is now — quality, satisfaction, availability, etc. — and lower your costs enough to cover a $1.4 billion shortfall," said Laura Armey, a professor who studies the military and economics at the Defense Resources Management Institute at the Naval Postgraduate School. "It's just not going to happen."

The proposed reforms also don't address what she calls an unequal distribution of the commissary benefit. For example, younger, more junior officers tend to use the commissaries much less than their more senior counterparts, she said.

She said the reform effort raises important questions for the future of the commissary system.

"Is there a better way to do it? Do you give people more money and eliminate the commissaries entirely? Do you privatize them — which comes with some problems because maybe they're not profitable for a reason and in many cases private outlets have built their own stores very close to military bases?" she asked.

The Commissary Agency said it's aware of the concerns and plans to make sure that the dollars saved by customers won't change.

Thornberry said lawmakers will be watching how the reforms are implemented in the coming months.

"We're going to oversee these changes and, if something needs to be adjusted, we won't be afraid to adjust it," he said.

Meanwhile, many continue to depend on the service.

During a recent Saturday morning at Los Angeles Air Force Base, Corrita Concon joined a throng of shoppers at the on-base commissary. The site gets about 750 shoppers every day, according to the store's data. A sign by the entrance advertised the day's sales: vine ripe tomatoes, 79 cents a pound. Asparagus for $1.98. And green grapes for a $1.50.

"My son loves the goldfish from Pepperidge farms," said Concon, holding a shopping bag. "I get fresh fruit. There's a lot of organic items now that they didn't have like three years ago, so I do come here for a lot of organic produce."

Concon said she supports efforts to improve the commissaries, but wants to see how the latest changes play out. She usually comes three times a week and spends about $100. She estimates she saves 30 percent on what goes into her cart, compared with what she finds at nearby stores. That all adds up.

"For military people, it's not like you can say, 'Oh I'm going to work extra hard and get a bonus today,'" she said. "You have a certain amount of money you can make per rank and so your money needs to get spread far."

This story first aired on PRI's The Takeaway. It originally appeared at American Homefront.