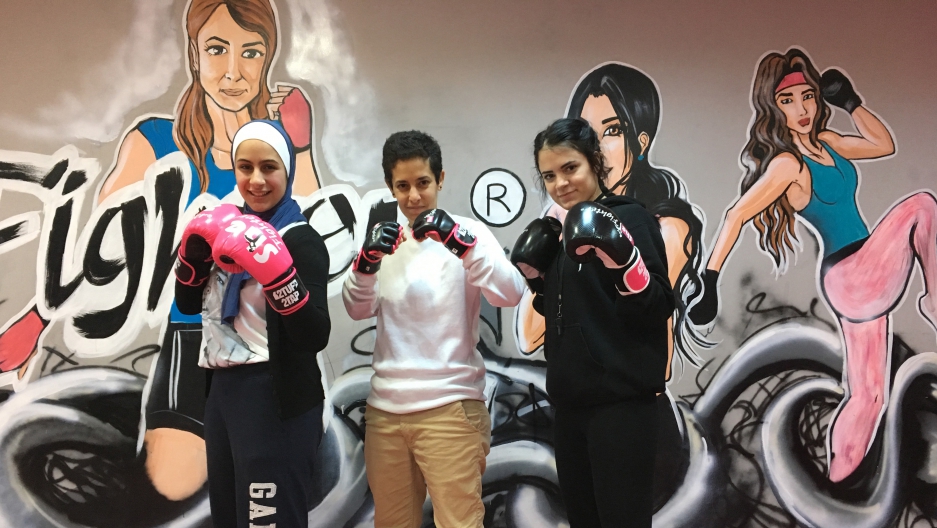 Lina Khalifeh (center), Batoul Jaikat (right) and one of the students at the SheFighter studio in Amman, Jordan.

It's 5:30 in the afternoon in Amman, and the gloves are on. At the female-only gym called SheFighter, it's time to practice those punches, jabs and kicks.

The studio is on the second floor of an apartment complex. Visitors have to press a buzzer to be allowed in. A group of teenage girls kick and punch the bags mercilessly. The very human-like dummy gets the most severe blows.

There are inspirational quotes on the walls. One of them reads: "Be the kind of a woman when you wake up every day in the morning, the devil says 'oh crap! She's up!'" It's from Joanne Clancy, an Irish mystery writer.

Twenty-one-year-old Batoul Jaikat is the instructor this afternoon.

“Boxing has changed my life,” she explains, "not just physical-wise, but also psychological-wise. Here in Jordan, most of the girls wait for someone to help them — whether it’s her father or it’s her brother. She always waits for someone to take action. But here at SheFighter, we’re trying to change this.”

SheFighter is the brainchild of Lina Khalifeh, who has short black hair and a boxer’s body.

Growing up, Khalifeh’s father called her a troublemaker. She used to get into fights with boys a lot because she wanted to prove to them that she was just as strong.

These days, however, Khalifeh-the-troublemaker is running Jordan's first self-defense studio for women. 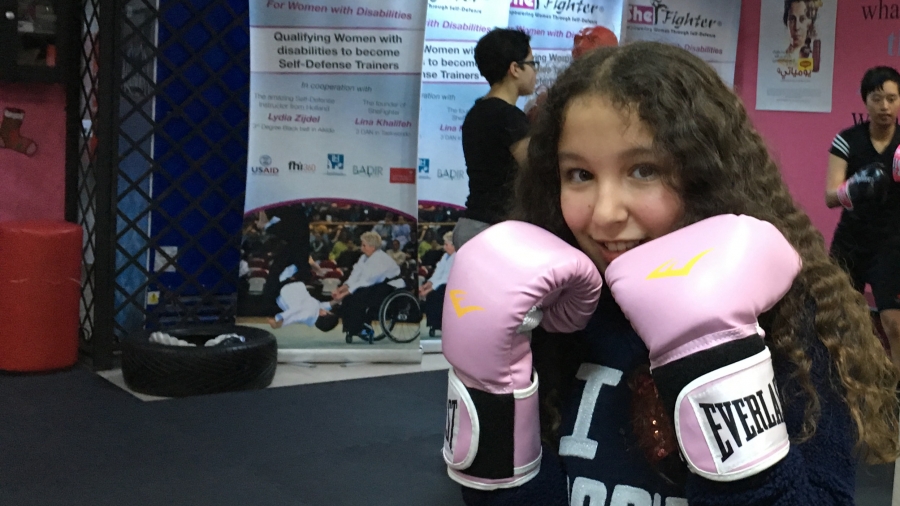 One of the students at SheFighter.

“I started training taekwondo when I was 5 years old,” Khalifeh tells me. “I was really good. I started winning championships as I grew up and I got about 20 gold medals, three of them international.”

Khalifeh studied French literature in college. And one day, as she was heading to class, she noticed something was wrong with her friend, Sara. She had bruises all over her face.

“She was being attacked by her brother and father,” Khalifeh recalls, “so when I tried to help her, she said ‘you know, we can’t do anything.’ It just pisses me off — the idea of women being hurt and they can’t do anything.”

At that time, Khalifeh's taekwondo ambitions were on hold because of a nasty knee injury. So, she thought, instead of training for medals, why not teach young women like Sara how to stand up for themselves?

She began teaching self-defense classes in the basement of her parents’ house. They were a mix of taekwondo, boxing and self-defense — the idea behind SheFighter.

“It was a challenge at the beginning,” she says, “not everybody was interested in the whole system. It took me one year until I decided to leave the basement and start partnering with different gyms in Jordan.”

A couple of years of partnership, and Khalifeh finally managed to open up her own studio.

But slowly, people started to notice Khalifeh’s work. The girls loved it. For some, the studio became their second home. They came after school and on vacations.

SheFighter grew to the point where, in 2015, Khalifeh got invited to the White House. 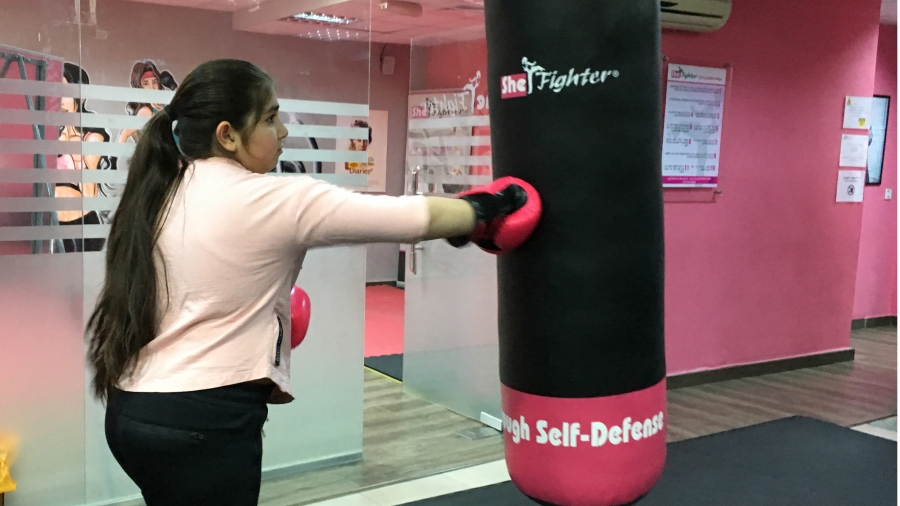 One of the students at SheFighter.

“They didn’t tell me I’m going to meet President Obama,” she says. “Suddenly they’re like ‘everybody sit down. The president will come.’” Obama called out Khalifeh’s name and introduced her as a “leader of social change.”

Khalifeh says she will never forget that moment. The girl who was called a troublemaker in childhood was now a woman sitting in front of the president of the United States, who was praising her leadership.

“It was a great push for me,” Khalifeh says, “to know that I am being appreciated somewhere in the world, by President Barack Obama. I can’t stop. Even though I have so many challenges here.”

Obama's praise for Khalifeh brought with it more attention back home.

The evening I visited, one of her students showed her a textbook on entrepreneurship. She had seen Khalifeh's name there in class. It was among a list of successful entrepreneurs — the only woman on the list. 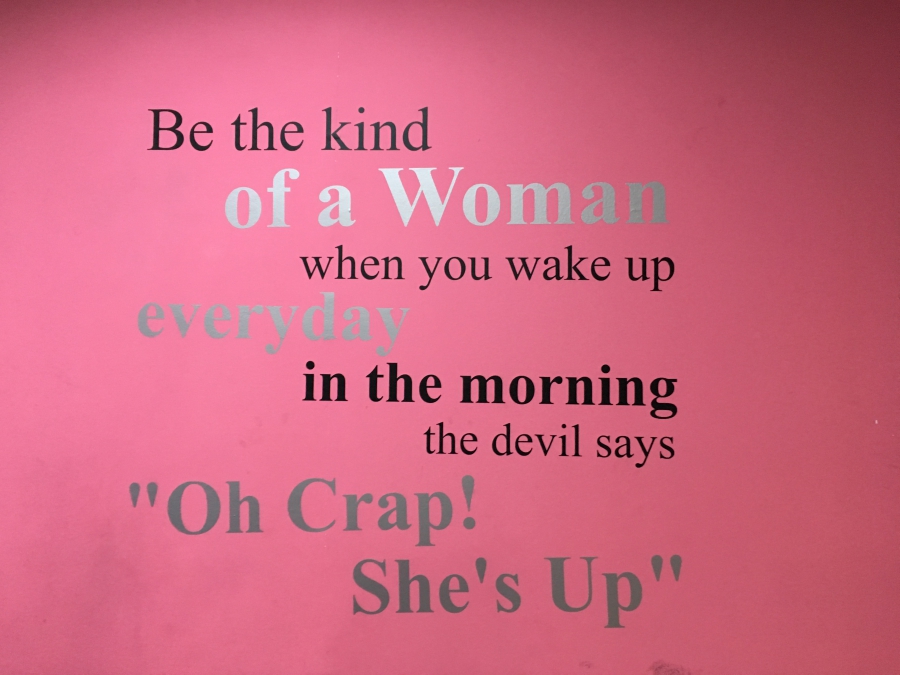 A quote on the wall at SheFighter studio in Amman, Jordan.

“Now the students can learn about people who are actually making change in society,” Khalifeh beamed after she saw the book. “They don’t have to learn about somebody outside the country. Some of them want to be like me. Some just want to develop their own skills. So I’m happy that I’m actually influencing them in a positive way.”

Khalifeh wants to go beyond this studio in Amman. She has set up classes for Syrian refugees. She is expanding SheFighter to Saudi Arabia and possibly Kuwait. She gives talks at universities and schools.

For the girls who come here, SheFighter is more than a space to work out. Khalifeh says some of the girls come to her with life problems. She listens and tries to help if she can.

And lately, something interesting has happened. “Now we’re getting more men who want to enroll their daughters to the training,” Khalifeh says. “I’m really happy about it.”

With this, the session wraps up for the night. One by one, the girls collapse on the floor. Their faces are all red and they’re dripping with sweat.

The Madeleine Albright quote on the wall behind them reads: "It took me a long time to develop a voice, but now that I have one, I'm not going to be silent."