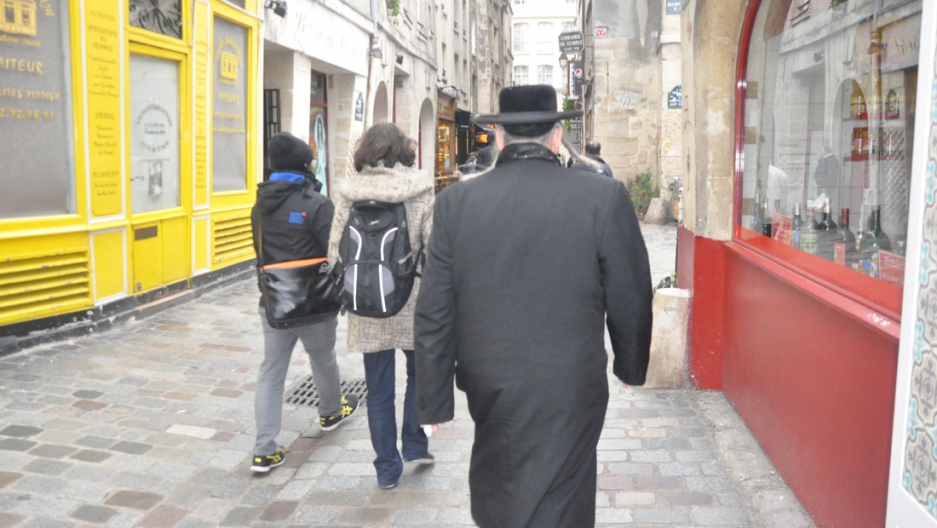 Some Jews in France are feeling increasingly uneasy, amid some high-profile anti-Semitic incidents.

When her 7-year-old son, Noah, came home from school with a black eye, Virginie Selem decided she had finally had enough.

“He told me someone at school had called him a dirty Jew,” says Selem, a mother of three living in Alfortville, a middle-class suburb southeast of Paris.

Selem describes her family as not especially religious, but at the start of the next school year, she took her three children out of the French public education system and put them in a private Jewish school.

“When [Noah] was in public school he came home feeling ashamed,” Selem says. “I wanted my kids to come home from school without feeling shame.”

French law prohibits collecting statistics based on race, ethnicity and religion, so it is difficult to quantify the number of Jewish students leaving public schools. But anecdotal evidence — and a steady flow of Jews leaving not only French schools, but France itself — points to a climate of insecurity that may be getting worse.

Much of that insecurity seems to be fueled by tensions between France’s Muslim and Jewish populations at a moment of particular volatility after some high-profile terrorist attacks aimed at French Jews.

Francis Kalifat, the president of the Representative Council of French Jewish Institutions, one of the country's largest Jewish organizations, points to several factors that he says have led to an increase in anti-Semitic incidents. They include the rise of the far-right National Front, the movement to boycott products made in Israel, and Islamist extremism.

France has one of the largest Muslim populations in Europe — 4.7 million, according to Pew Research — as well as the largest Jewish one, about 480,000. Hate crimes against both groups have risen in recent years.

Observers say some of the tensions are playing out in schools.

Elodie Marciano is the founder of Choisir L’École Juive, a nonprofit organization that since 2013 has helped more than 400 families, including the Selems, transfer their children from French public schools to private Jewish institutions.

The group is run by volunteers and funded by private donations, which help parents pay for the additional costs of private school.

While Marciano emphasizes that parents’ reasons for taking their children out of public school vary, she says there’s a climate of anxiety for some Jewish parents.

“Often these families are not particularly religious,” Marciano says. “But when an incident happens in school and they go to the headmaster to say something, they’re asked not to report it.”

When Virginie Selem went to see the school administration about her son’s black eye and name calling, she maintains that the headmaster not only didn’t report the incident, but also warned her that if she took her children out of the school, they would not be invited back.

“I told friends about what happened, and the next year we took a combined 12 children out of that school,” Selem says.

She adds that when she was in school, “all religions — Catholics, Jews, Muslims — we went to school together and we had no problems. Now I don’t know what’s changed.”

When it comes to anti-Semitism in the classroom, some point to the growing tensions in France over the Israeli-Palestinian conflict.

“The majority of these [anti-Jewish] acts are committed by young Muslims in underprivileged areas,” according to Michel Serfaty, a rabbi in the southeast Paris suburb of Ris-Orangis.

Every year, Rabbi Serfaty hires a group of Muslim youth to work for him as part of Muslim-Jewish dialogue he’s run since 2004. In the summer, he takes a group of his recruits on a cross-country tour, mostly to predominantly Muslim areas, to promote the dialogue.

“We ask Muslims in these areas, do you know any Jews?” Rabbi Serfaty says. “More often than not, the answer is no.”

Hassane Bounabi, a 26-year-old student, says he was part of that group before he began working for the rabbi.

He says the dialogue helped open his eyes.

“We always have certain ideas, prejudices that we inherit, and that’s exactly why we have to seek out one another,” Bounabi says. “Because if we stay closed in our own communities, that is what creates tension.”

Encouraging similar discussions in the public schools is a challenge because of France’s tradition of laïcité — a form of secularism that prohibits religion in any public space, including government buildings and schools.

For now, Selem says she’s happy she can send her children to a school where they can feel more open about expressing their religion.

“If you see my children, they smile,” she says. “They go to a school where they can eat kosher and put on a kippah [Jewish skull cap] with no problem.”