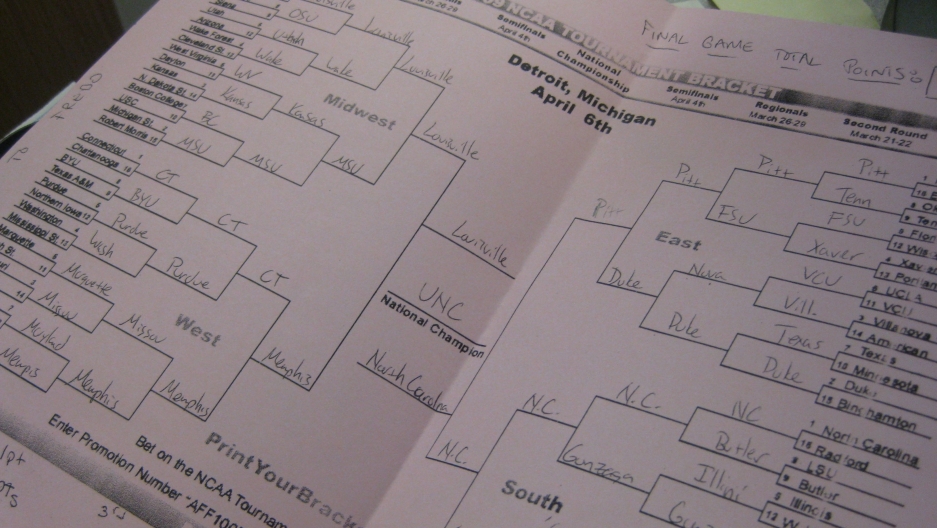 This is a snapshot of a previous tournament's bracket.

March Madness is upon us once again. This year's NCAA Division I Men's Basketball Tournament welcomes five teams making their first-time appearance, including Northwestern University and the University of California, Davis.

Villanova University, the defending national champions, earned the overall No. 1 seed. Experienced teams like the University of North Carolina, the University of Kansas and the University of Arizona made it back to the Big Dance, but there's no telling what could happen in a field where the top-ranked team from the regular season changed several times.

If you're in a pool, brackets are probably due by the first tipoff on Thursday at 12:15 p.m. Eastern time. Whether you're a passive fan or a die-hard supporter of your alma mater, we got in touch with someone who can help out with your office and family pools.

Joe Gagliano knows a thing or two about making the right picks. He's a sports gambling expert, and the person who orchestrated and financed the largest sports scandal in history. He's also the author of "No Grey Areas: The Inside Story of the Largest Point Shaving Scandal in History and the Consequences."

Gagliano's fixing days are behind him, and now he gives advice on filling out tournament brackets. Here are his top three tips:

And if you're not a fan of college basketball, there are always those great spinoff brackets that happen at this time of year. We, of course, loved the KPCC brackets from 2015 that let you match up your favorite public radio shows. Takeaway listeners provided their personal favorite "alternative" brackets:

Jessica from New York City: "My husband and I did a bracket with our top 16 baby names when I was pregnant. We seeded them in alphabetic order and each name did battle with the names next to it until we came out with a winner. My husband's winner ended up being our winner.”

Allen from New York City: "Some brackets I've been following lately include the Trevor Noah bracket for Trump tweets and the Bill Maher brackets for worse Congressman. There are probably others but those stand out.”

Victoria from Austin, Texas: "I think SXSW should have its own brackets — one for music, one for films, and one for events. There are so many things happening here it is simply an embarrassment of riches. That's my March Madness.”