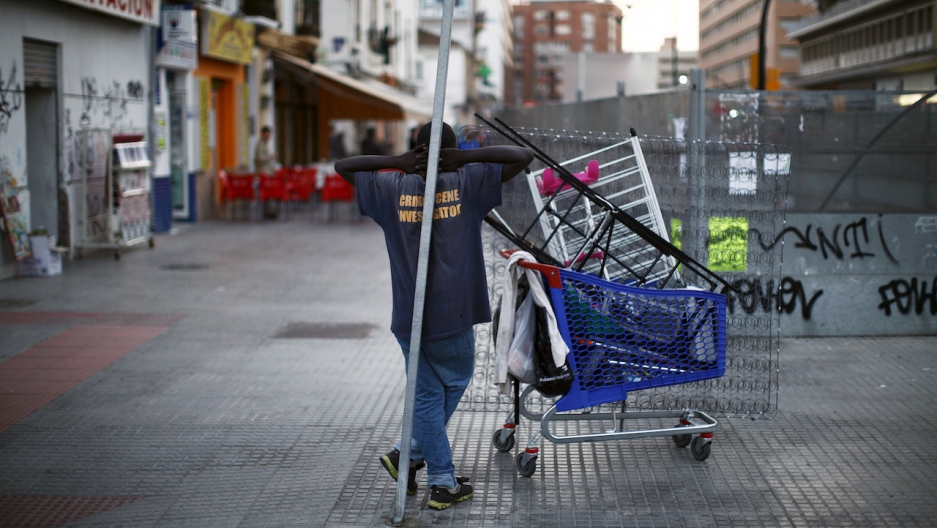 A scrap dealer leans on a traffic signal and watches as protesters (not pictured) take part in a "March for dignity" to protest austerity measures, under the slogan "Pan, techo, trabajo y dignidad" (Bread, housing, job and dignity), in downtown Malaga, southern Spain, Oct. 22, 2015.

Europe’s far-right is on the rise. The trend is nationalist and anti-immigrant. Extremist parties are poised to make gains in elections across the continent, from France to Holland to Germany.

But in Spain, no such movement has gained traction. And you’d think it would, given years of recession, high unemployment and an influx of foreigners.

To understand why Spain bucks the trend you might want to visit Villacañas, south of Madrid. This flat, dusty village was once abuzz with the sound of ... doors. Door factories. During Spain’s home-building boom in the 2000s, Villacañas was the main door supplier for the country, cranking out tens of thousands of them a day.

Then the bubble burst.

As you drive into town there are signs of a ruined economy everywhere: huge abandoned factories line the road, their windows busted out, their loading docks shuttered.

Villacañas’s mayor, Santiago Garcia, says it’s been like this for the ten years he’s been in office. He worries about high unemployment and all the young people who continue to leave town. But one thing that’s not even on his radar, he says: the possibility of a far-right backlash at the polls.

“I think a far-right, xenophobic, populist movement has to have effective leadership to gain ground,” he says. “And its messages [need to] coincide with what people are feeling.”

In Spain, apparently, the far-right has neither an effective message nor messenger. There is one far-right party, Vox, running candidates. But it has a tiny following.

Given the hard-right swing across the European continent, what makes Spain different?

Folks outside Villacañas’s busiest lunch spot offer their take. Jesus Higueras, a 52-year-old handyman living on unemployment benefits, gets by on about $450 a month and free food from the town’s food bank. He says far-right ideas remind people of Franco — as in General Francisco Franco, the dictator who ruled Spain for half a century until 1975.

“No one wants to return to those days,” he says. “It took a huge effort for this town to recover. A huge effort.”

They had to recover from the oppression, but also from the poverty and isolation that marked Franco’s reign, he adds. Spain welcomed immigrants during the boom years that briefly made Villacañas rich. And even though fortunes have changed, no one here seems to blame outsiders.

“We are all human beings in a bad situation,” she says. “These are not times to start discriminating.”

But there’s another reason the far-right is having trouble rallying against non-Spaniards, says Mayor Garcia.

“Most of our immigrants came from the east, from Romania,” he says. “We also had people from all over Latin America. Then the crisis hit and they just left.”

Today, Garcia says, immigrants might make up about one percent of the town and are well-integrated. 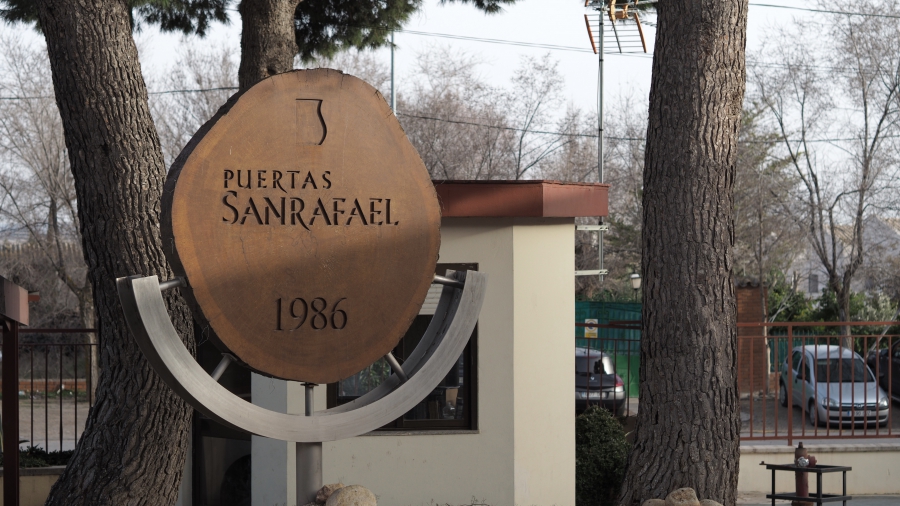 San Rafael door factory, one of just two still operating in Villacañas. In its heyday, the town had 14 factories employing thousands of workers.

At a door factory that’s still open, called San Rafael, general director Miguel Angel Cepeda tells me they have just one foreigner on staff, from Argentina. Out of 241 employees. Business, Cepeda explains, is on the upswing, but not enough to lure foreign labor back — especially with so many locals still unemployed.

Some locals, out of desperation, have returned to what they did before doors: farming. But with a twist.

In a small warehouse on the outskirts of the village, Angeles Pontes loads her organically grown lentils into a packaging machine. The lentils are bound for Germany.

“Some 120 farmers are getting support to expand and diversify into crops like this,” she says, “and to embrace sustainable practices, like creating wetlands on parts of their land.”

The underwriter? The European Union. The EU has also pumped nearly $1 million into worker retraining here, churning out plumbers, electricians, forklift drivers — all of which makes the EU very popular in Villacañas.

“I’m sure that Spain is still thrilled to be in EU,” says Benita Prous, sitting at a downtown café. “Even if they set all the rules, it could be that being a member boosts our self-esteem a bit.”

Self-esteem, and savings accounts. For populists preaching against the EU and immigration, this is hardly fertile ground.