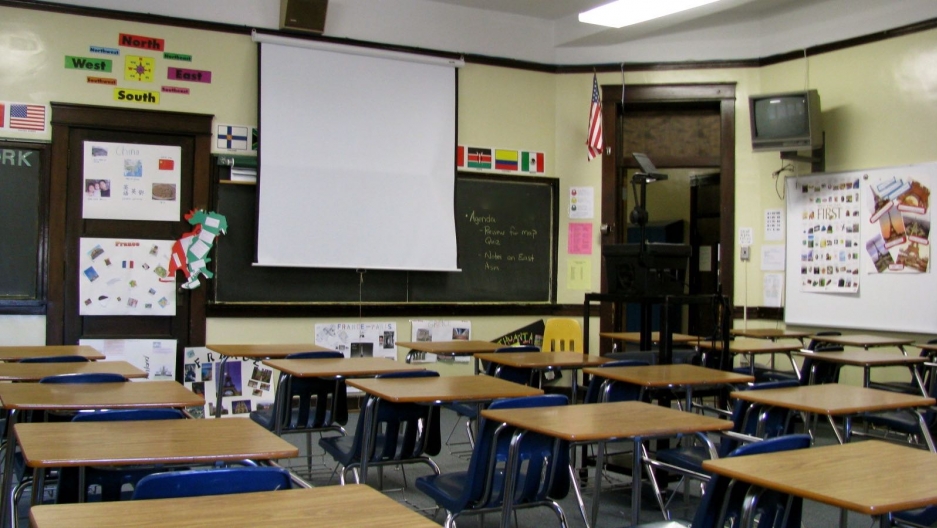 A classroom is pictured here.

#51. @realDonaldTrump, how does your administration plan to officially change the Every Student Succeeds Act?

The Every Student Succeeds Act (ESSA), which was signed into law by former President Barack Obama in December 2015, amends the Elementary and Secondary Education Act of 1965 and replaces the No Child Left Behind Act from the George W. Bush administration.

At the time of ESSA's passage, many hailed this multifaceted education law as a bipartisan victory, with The New York Times reporting that the law represents “the end of an era in which the federal government aggressively policed public school performance, and returning control to states and local districts.”

“This legislation ends the federal obsession with high-stakes testing that narrowed what was taught in classrooms and did little to close the achievement gap,” Michael Mulgrew, president of the United Federation of Teachers, said in a statement. “This new bill makes clear that ‘test and punish’ is no longer the law of the land. It is a proud day when the Senate and Congress listen to parents and teachers across this country and respond to our shared concerns.”

But not all were pleased. Education activist Jeff Bryant criticized the bipartisan measure, writing that “the federal government’s influence on education has historically been positive.”

“What this bill doesn’t change specifically in substance it does change in rhetoric,” Tamara Hiler, policy adviser for education at the think tank Third Way, told The Atlantic. “I think if anything, this bill really takes the air out of the political footballs that have been Common Core and overtesting … Hopefully the passage of this new bill will lessen the tension around these issues for the foreseeable future.”

As part of our 100 Questions in 100 Days series, Twitter user Amy Beaudry asked for President Donald Trump to weigh in on this question: “Do you have any plans to revise, in any way, the Every Student Succeeds Act passed in 2015?”

The full answer to that question seems unclear, at least for now. Just last week, the Senate voted 50-49 to block the accountability rules for ESSA, which was supposed to take full effect in the 2017-18 school year. Randi Weingarten, president of the American Federation of Teachers, urged lawmakers to reconsider their positions just days before the repeal.

“These regulations took a full year to create and were crafted with much stakeholder engagement, including input (both positive and negative) from thousands of educators and parents. Repealing these regulations now would not just be counterproductive and disruptive, but would demonstrate a disregard by Congress of school districts’ operations and timelines,” Weingarten wrote in a statement.

Senate Majority Leader Mitch McConnell applauded the measure on Thursday, saying in a statement that he was “proud the Senate voted to end an Obama-era regulation that was simply unacceptable for America’s students and educators.”

Sen. McConnell continued: “States are supposed to be the leaders on core curriculum and decisions on how to best meet the needs of their students — not Washington bureaucrats. The repeal of this regulation will help restore that process. Thanks to the Congressional Review Act, we capitalized on the opportunity to move past this overreaching regulation to ensure the ideals of the Every Student Succeeds Act (ESSA) are upheld, and I commend Senator [Lamar] Alexander for his leadership on this issue.”

Now that the resolution is headed to President Trump’s desk, we’re wondering: Mr. President, how does your administration plan to officially change the Every Student Succeeds Act?