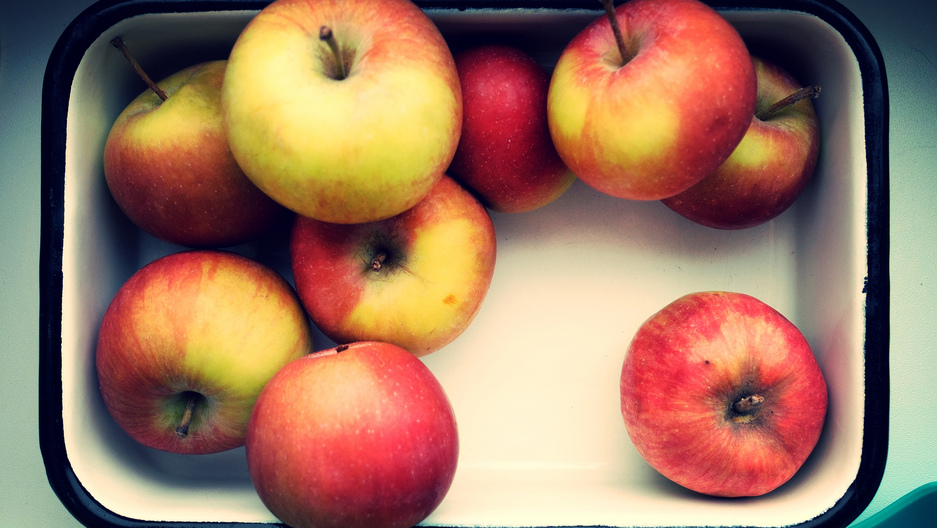 Apples are natural sources of pectin, which researchers say has temperature-sensing properties.

It may look like shrink wrap, but a film recently developed by a team of researchers has a secret power: It’s incredibly sensitive to temperature.

“Just to give you a sense, it … can detect, for example, the presence of warm bodies like a rabbit, or a human body or a hand at a distance of up to a meter,” says Chiara Daraio, a professor of mechanical engineering at the California Institute of Technology and a co-author of the new study, published in Science Robotics.

The film’s sensitivity rivals that of the membrane found in pit vipers — the best heat detectors in the animal kingdom. But it’s no space-grade plastic. The film is developed from pectin, a sugar molecule found in fruit like apples; it's also a common thickener for homemade jams and jellies.

The researchers discovered pectin’s temperature-sensing properties by accident several years ago. “We actually started out our research with the goal of creating artificial wood,” Daraio says. As the team combined plant cells with tiny structures made of rolled-up graphene, they noticed that the synthetic woods were reacting to changes in temperature.

They traced the reaction back to pectin in the plant cell walls. Pectin’s electrical conductivity changes in response to temperature, Daraio explains: A pectin molecule is composed of weakly bonded double strands — like DNA — that are linked by positively charged calcium ions.

Researchers think the material could have broad applications in robotics and biomedical fields, to make artificial skin more “feeling.” Daraio says the material could help robots distinguish between a human and another robot — or give prosthetic limbs more sensitivity. A news release from Caltech surmises that the material could even be applied to wounds, alerting doctors to the warmth of infection.

In the next stages of research, Daraio says the team wants to stabilize the pectin film to work at even higher temperatures. “Right now, we have tested it between 5 and 45 degrees Celsius, which is generally the temperature in which biomolecules and biological cells survive.”

“Part of the reason why we're limited between these relatively low temperatures is the fact that pectin films contain water, and at higher temperature, water starts to either bubble or evaporate. And that reduces the performance of temperature sensitivity in these films."

Daraio, who calls new materials the "seeds" of technological innovation, says the team is also looking to nature for more building blocks.

“We’re also exploring different kinds of molecules … also possibly extracted from complex biological cells, to directly capitalize on nature's own ability to synthesize these complex structures and use them in applications,” she says.