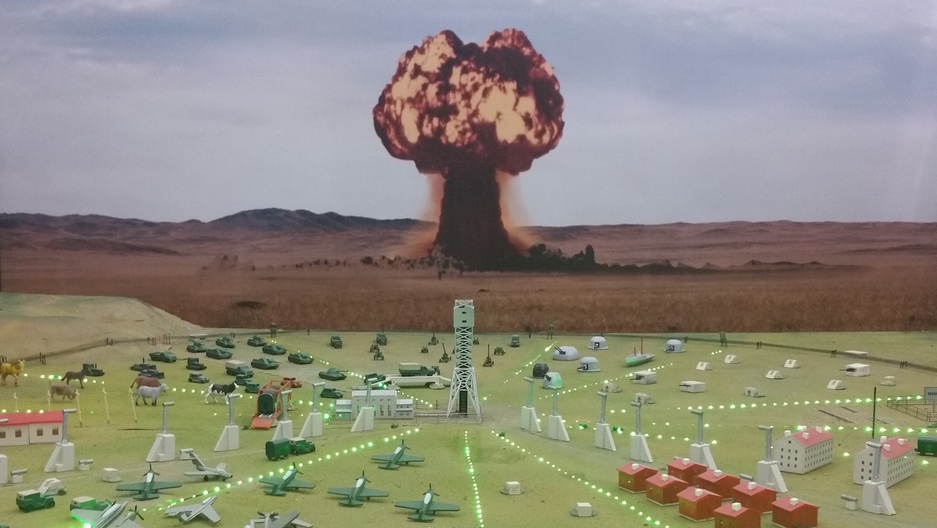 A model of the experimental field where Soviets carried out open-air nuclear tests in Kazakhstan.
Credit:

The place where the first Soviet atomic bomb was dropped looks like a small natural pond.

The bumpy roads that lead to it course through stark, but picturesque, countryside. The river Irtysh, which flows down from China and on to Russia, divides this northeastern part of Kazakhstan into steppes to the south and forests to the north.

The beauty hides an ugly history.

The older people here grew up watching huge clouds mushroom in the sky overhead. Man-made earthquakes regularly shook the ground under their feet.

Over four decades on the barren steppes of Kazakhstan, deep in Central Asia, the Soviets detonated 456 nuclear weapons.

They called this place, a vast testing site the size of Belgium, the Polygon.

The last nuclear explosion here was in 1989. Today, 25 years later, villagers are still suffering the consequences of heavy radiation.

An 82-year-old Eliugazy Nurgaliev remembers the first tests near his village of Qaynar. I met him not far from the Polygon at his daughter’s house.

Nurgaliev is one of the few people still alive who witnessed open-air tests here. And he is no ordinary witness.

“It was the early 1950s. The [Soviet] military came to our village and evacuated everyone. But 43 young men were kept behind,” he tells me.

After a pause, he adds: “I was among the 43 men who were chosen to stay behind in the village.” 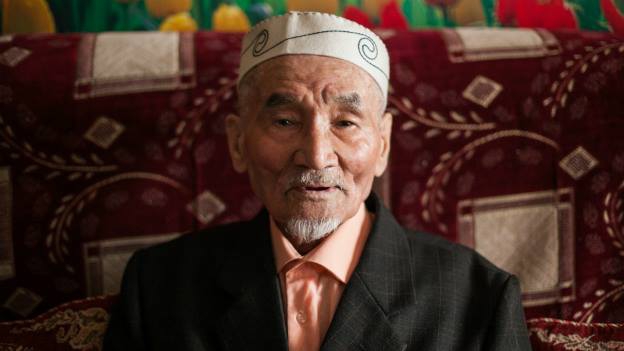 Unbeknownst to them, the young men were about to become guinea pigs in the Polygon’s earliest nuclear tests.

“The military people took us to the middle of the steppe, gave us a tent, food and music and told us to enjoy the picnic,” Nurgaliev recalls.

“Suddenly the sky turned red and a big red storm gathered above our village. We lost our minds.”

They were less than 10 kilometers from the explosions. Soldiers wearing gas masks later arrived to retrieve the 43 young men, who demanded to know what had just happened. 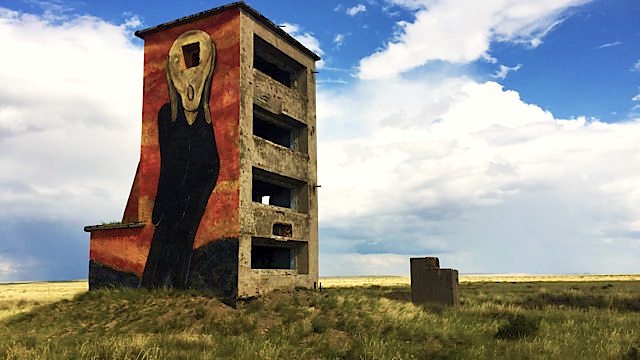 An old observation tower still stands at the Polygon nuclear test site in Kazakhstan. Kazakh artists recently painted a replica of Edvard Munch's painting “The Scream” on the tower.

Nurgaliev says one of the younger officers said nothing would happen to the men immediately — but that there may be consequences 10-15 years later. A commander shouted at him to shut up, Nurgaliev remembers.

Apart from that, they were offered no explanation.

Nurgaliev says all the men were taken back to their villages and families, but were under constant medical observation by doctors.

Not long after the exposure, some died from unknown illnesses. Some lived for several years but then developed radiation-related illnesses.

Nurgaliev says it’s a miracle that he has lived this long. But he believes radiation exposure has still caused significant damage to his family. Three of the children he fathered were stillborn or died as babies. His parents died of cancer.

The Soviets built walls, high-rise buildings, bridges and tunnels here purely to measure the impact of the explosions. The ruins still scatter the landscape alongside abandoned observation towers. The ground is dotted with huge craters filled with contaminated water. 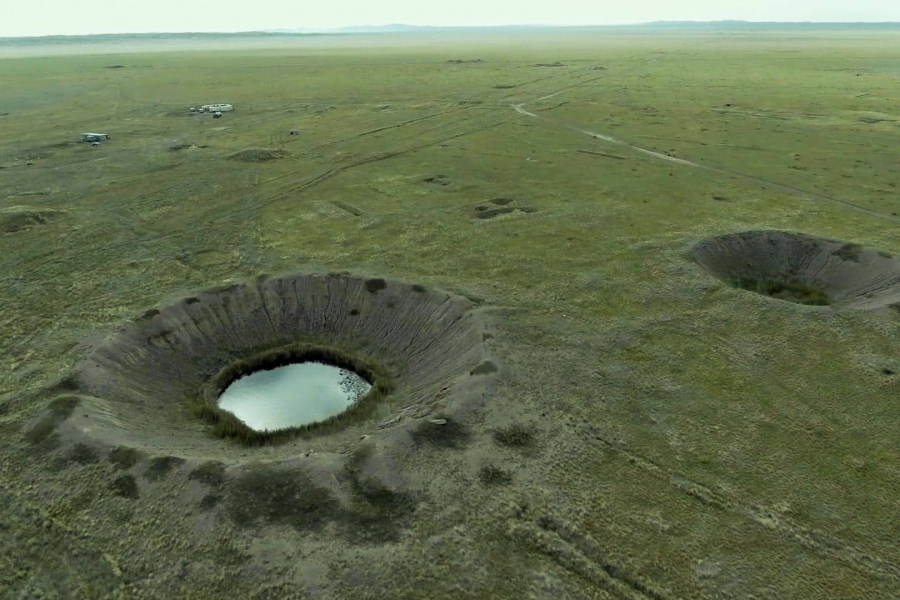 Craters formed by atomic tests at the Polygon.

With the help of the Americans and the Russians, Kazakhstan buried and sealed two main underground testing sites. Now they’re in the process of clearing every inch of the Polygon of radioactive remnants. It’s slow and expensive work.

Officials told us that many parts of the site are now safe. But as we walk through the area, dosimeters used to measure radiation levels jump wildly between safe and dangerous levels. We wear protective outfits during our visit, which only lasts about a half hour before we’re advised to leave.

A few dozen kilometers southeast of the Polygon is the village of Znamenka. A young woman named Pakizad was born here in 1991 — the year Kazakhstan gained independence and shut down the Polygon.

Pakizad was the only healthy child in her family. Her three sisters were all born with bone deformities. But when Pakizad turned 18, her body started to show alarming changes.

“My bones and jaw started growing. My hands grew bigger; my shoe size [grew] from 37 to 43 within a year.”

She shows us the last photo she has of herself as a healthy-looking teenager. 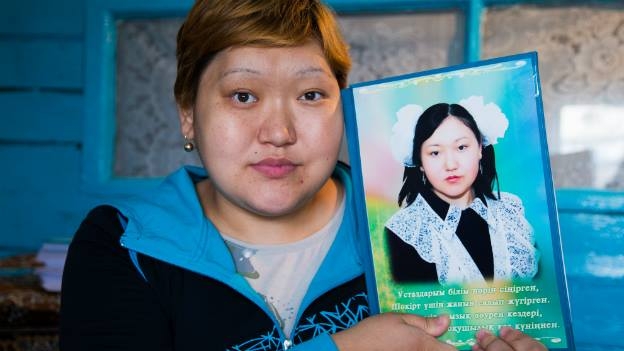 Pakizad holds a photo taken before her health problems began.

Now, at 26, the sight in one of her eyes is failing. She has developed diabetes. Recently doctors found a tumor in her neck near a main artery.

“I want to get married and have children. But now it is out of question,” Pakizad says. There is a long pause. “The Polygon took away my life.”

Pakizad gets tired quickly. We stopped our interview several times so she could catch her breath. At one point, she suddenly fainted. Pakizad’s mother, who cares for her full-time, said her daughter faints two to three times every day.

Pakizad is one of hundreds of thousands of young men and women in this part of Kazakhstan who might have been affected by the Soviet nuclear program via their parents, who lived through the tests.

Doctors in Kazakhstan are worried about the younger generation’s health.

“Our studies show that radiation damages genetic code and the exposed person can pass it onto [the] second or third generation,” says Dr. Talgat Muldagaliyev, a professor at the Radiation Medicine Institute in Semey, the closest city to the Polygon.

“Closing of the Polygon doesn’t end its impact on health. It takes hundreds of years for radioactive materials to decay,” he says. “The locals around the Polygon were exposed to radiation for many years and this makes the Polygon different from other nuclear disaster zones.”

Muldagaliyev is especially worried about radiation-related illnesses that are now being found in villages far from the testing site, which until recently were considered safe — things like birth defects, leukemia and eye cancer.

“But we have to do more research and studies,” into what’s behind the illnesses, the doctor says.

The first major task the newly independent Kazakhstan had to deal with was to close the Polygon and secure the radioactive materials and weapons left behind by the Soviets.

What they cannot stop is the impact of the nuclear bombs on new generations. 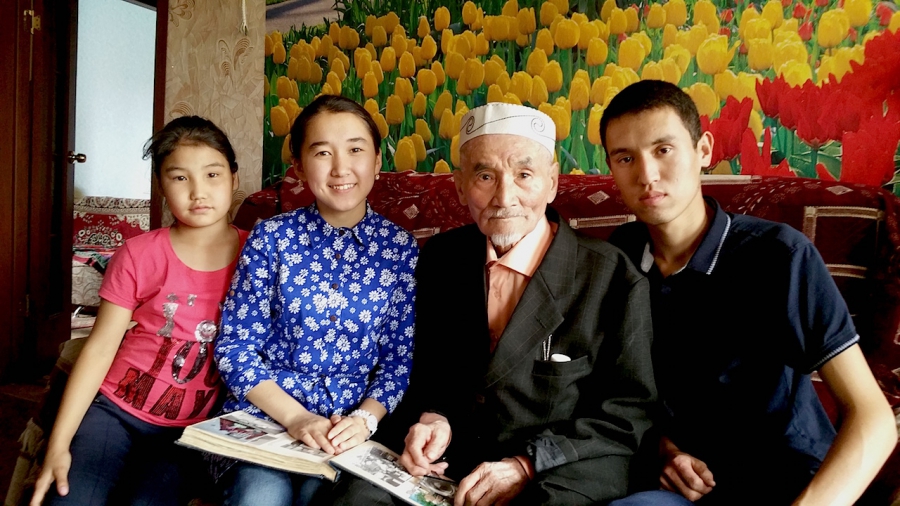 Eilugazy Nurgaliyev sits at home with his grandchildren.