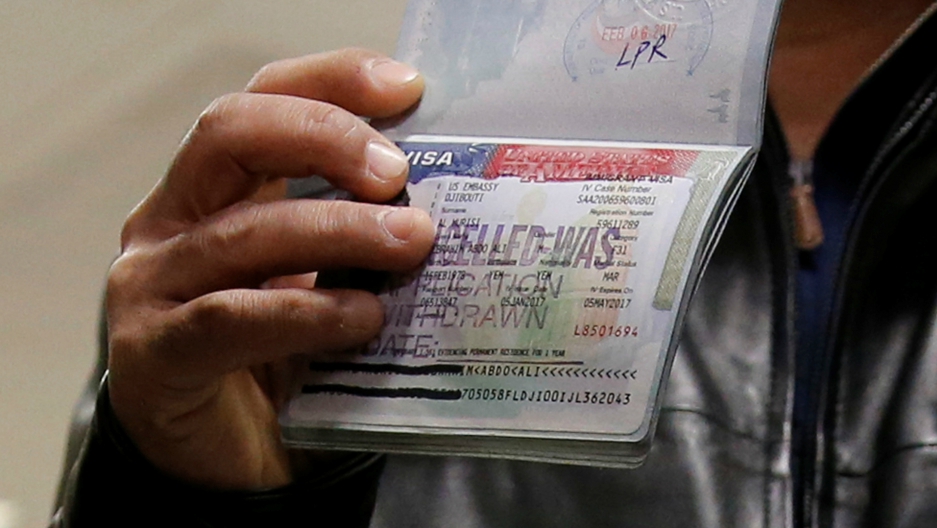 A Yemeni national who was denied entry into the US after President Donald Trump's first immigration and refugee visa ban shows the canceled visa in a passport, at Washington Dulles International Airport in Chantilly, Virginia, Feb. 6, 2017.

#49. @realDonaldTrump, do you plan to expand the scope of your immigration and refugee ban? #100Days100Qs

President Donald Trump's first executive order temporarily restricting travel from seven Muslim-majority countries and banning refugees was suspended in federal court. His revised order, announced last Monday, is narrower in scope. But it's temporary. So what comes next?

Trump's first immigration and refugee ban earned praise from his base, but also inspired massive protests, drew worldwide condemnation and caused chaos at airports around the world — not to mention fear and anxiety for untold numbers of people hoping to resettle in the US.

That order ended refugee admissions for 120 days, indefinitely suspended entry for Syrian refugees and blocked travel for 90 days from Iran, Iraq, Libya, Somalia, Sudan, Syria and Yemen. Trump signed the order on 4:42 p.m. ET on Jan. 27 — a Friday. It went into effect immediately, with little direction to airport workers and border control officials about how it should be implemented, and about whether it applied to permanent legal residents (green card holders) living in the US, dual nationals or people from those countries whose visas had already been approved.

After federal courts halted different parts of the order, the Trump administration decided to go for a do-over, rather than keep fighting what seemed like a losing battle all the way to the Supreme Court.

The new order is similar to the original, but it's more narrowly written. The 120-day ban on refugees stays, but it doesn't say that Syrian refugees will be subjected to an indefinite ban. The 90-day country-specific ban is in, too, but it no longer applies to Iraqis. A previous exemption for religious minorities (non-Muslims) is out, and there are exemptions carved out for green card holders and those with valid visas. There's also a 10-day delay before it goes into effect, on March 16.

The American Civil Liberties Union is fighting the ban. The state of Hawaii has already challenged it, and a federal court will hear those arguments on March 15.

One legal challenge has posed the first setback: On Friday, US District Judge William Conley in Wisconsin blocked enforcement of the executive order for one particular family escaping war in Aleppo, Syria.

Assuming the order survives legal challenges, we're left wondering: What's next? (Still a fair question even if it's struck down, presumably.)

Will Trump add more countries to the list, either before the 90 days are up or later, in the event the order is extended?

The administration's stated logic for choosing the banned countries suggests more countries could be added.

"Three of these nations are state sponsors of terrorism," Attorney General Jeff Sessions said, referring to Syria, Iran and Sudan, during prepared remarks announcing the ban, alongside Secretary of State Rex Tillerson and Secretary of Homeland Security John Kelly. "The other three have served as safe havens for terrorists — countries where the government has lost control of territory to terrorist groups like ISIL or al-Qaeda and its affiliates. This increases the risk that people admitted here from these countries may belong to terrorist groups, or may have been radicalized by them."

"We cannot compromise our nation’s security," he added, "by allowing visitors entry when their own governments are unable or unwilling to provide the information we need to vet them responsibly — or when those governments actively support terrorism."

Giving those explanations, it's hard to understand why the US is still allowing travel from, say, Afghanistan. Or from Saudi Arabia. Fifteen of the 19 hijackers on 9/11 were Saudi Arabian. The others were from Egypt, Lebanon and the United Arab Emirates.

According to The Daily Beast, White House officials are asking the State Department and DHS to review the possibility of adding more countries to the list.

So, Mr. President, do you plan to expand the scope of your immigration and refugee order?

See all our questions for Donald Trump at pri.org/100questions.