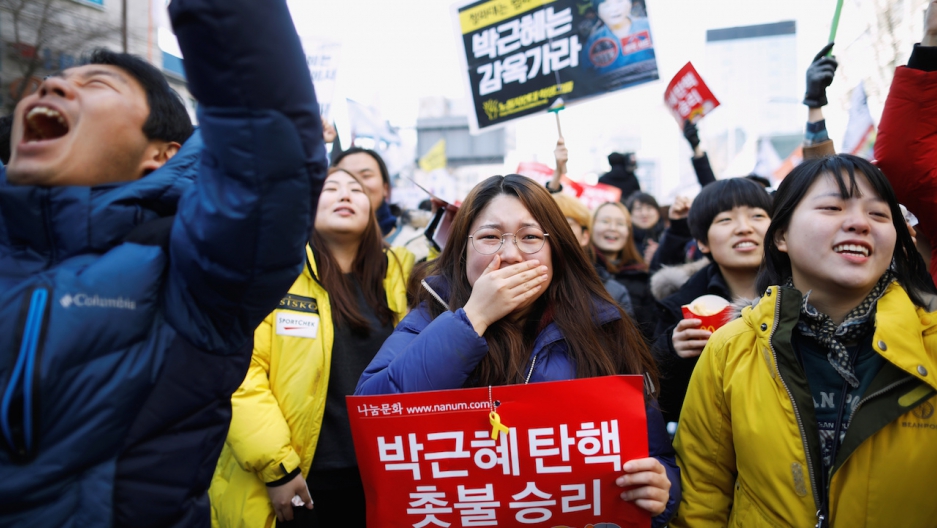 People react after hearing that President Park Geun-hye's impeachment was accepted, in front of the Constitutional Court in Seoul, South Korea, March 10, 2017.

The rival groups epitomized the opposing passions and generational splits over the country's sweeping political scandal.

Around 3,000 anti-Park demonstrators, mostly in their 20s to 40s, erupted with joy as the verdict was read out in a live television broadcast.

"We won, we won," they chanted, waving banners.

"This is a victory of democracy," 27-year-old student Ahn Yo-Wool told AFP, wiping tears from her cheek.

The South is Asia's fourth-largest economy but growth is slowing and many complain of a lack of opportunity in a country dominated by large companies with close ties to the political establishment.

Another student, Lim Na-kyung, added: "The impeachment of the president is truly a day that will go down in history. My heart is full of emotion and I am very happy."

But some of Park's diehard supporters, mostly older conservatives with fond memories of the rule of her late father, dictator Park Chung-Hee, still stand by her.

Police deployed buses and thousands of riot personnel to separate the groups and acting president Hwang Kyo-Ahn said two Park supporters died in a clash with riot police near the court.

One of them was reportedly hit on the head by a speaker falling from a vehicle roof as the pro-Park crowd swarmed towards the police blockade, wielding sticks and chanting "Destroy Constitutional Court!"

Some broke police barricades and attempted to pull away police buses blocking their path, prompting the police to use pepper spray.

"We don't accept this decision," said Cho Bong-Am, 60, a kindergarten operator. "We will take to the street to fight to the end."

The pro-Park backers were left stunned by the ruling.

"Nullify impeachment, dissolve parliament," they chanted, singing to military marches and waving both South Korean and US flags.

Park has maintained a hardline stance on North Korea and many of her heartland voters blame her removal on machinations by Pyongyang.

"Justice is dead. I think the government must now declare a martial law and wipe out these pro-Pyongyang leftists", said Ahn Moon-Yung, a 71-year-old shopkeeper.

Another shopowner, Han Sang-Il, 61, said he had been participating in weekly pro-Park rallies every Saturday over the past 17 weeks.

"Now is time for people to rise up to overturn the court ruling. Revolution calls for blood," he said angrily.

The front-runner in polls for the presidential race, due within 60 days, is leftist Moon Jae-In of the Democratic Party.

If he wins, said Bae Soo-Rok, 58, who wore a military uniform and said he was a retired marine, "We will all rise up and oust him from power within a year."