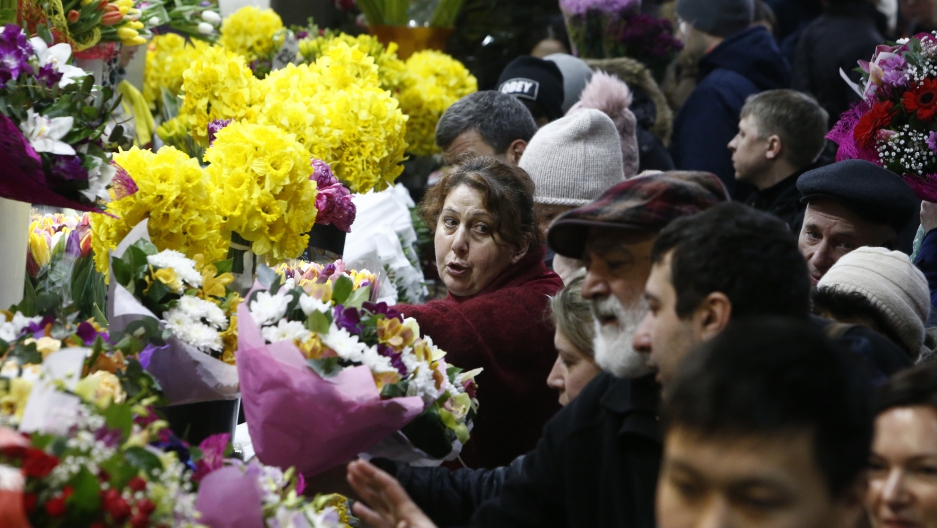 A vendor sells flowers for the upcoming International Women's Day at the Rizhsky flower market in Moscow, Russia, on March 7, 2017.

Violence against women, as an acceptable practice in some cultures, is hardly a new story to me. For years, I’ve reported in countries across the Middle East and Asia, where women face deep-seated oppression and a lack of basic rights, including the right to pursue justice against domestic violence.

But this was different.

Russia’s numbers stopped me in my tracks. About 14,000 women a year are being murdered in domestic violence in Russia, according to its own interior ministry. Some organizations like the UN and Human Rights Watch have estimated lower figures — 12,000 murders. But it could be a lot higher than 14,000, some advocates say. Women typically underreport domestic violence, and police are known to downgrade the crime.

In rural areas, honor killings are often masked as suicides.

Whether it's 12,000 or 14,000 (or higher) — it’s a pandemic worth pausing to think about. That’s dozens of women murdered each day. Russian's violence against women dwarfs levels of violence against women in the US, which has twice the population as Russia. Russia's numbers are anywhere between 20 and 40 times higher than in countries like Turkey and across Europe.

Here's the first problem: The very fact that journalists and activists can't get specific numbers for domestic violence speaks volumes. It's the type of crime that male-dominated governments and law enforcement agencies don’t like to acknowledge. In most of the Middle East, the Persian Gulf and across Africa, it’s almost impossible to get accurate data on domestic violence deaths. In Saudi Arabia, domestic violence wasn't even recognized as a crime until 2013.

In Turkey, where I reported on domestic violence for a year, numbers have fluctuated wildly: The government said 66 women were murdered in domestic violence in 2002; that figure rose to 953 in 2009; and then dropped to about 300 last year — a fluctuation that has never been explained and that raises many suspicions about how seriously the government takes the crime. Currently, a network of Turkish activists keeps count, based on newspaper headlines and moles inside police departments.

Even if you take Russia's lowest number of about 12,000 women killed each year, it's still an astounding toll and on par with major global pandemics that receive much more attention and international response. And yet, there is zero global response to violence against Russian women.

Let's consider that in 2014, at the height of the Ebola epidemic in which a total of 11,000 people died, organizations from around the world responded. The World Health Organization convened an emergency meeting with health ministers from 11 countries. Doctors Without Borders parachuted in. The UN Security Council declared Ebola a “threat to international peace and security” and at the minimum, $1 billion was predicted to be spent on prevention. When it was mostly over, Time magazine chose Ebola fighters as their “person of the year.”

Are the women risking their lives to end violence in Russia also contenders for "people of the year"? Why not? How about Marina Pisklakova-Parker, head of the ANNA Association of Crisis Centers in downtown Moscow, who Across Women's Lives profiled recently.

She has stood up to abusive men and the government to speak out about this pandemic. As Russia cracks down on civil society groups, the government has labeled Pisklakova-Parker and her center for victims of violence “foreign agents” — a designation that is paralyzing their work. Pisklakova-Parker has not been overwhelmed by international support or media focus. We'd like to think that attitudes toward intimate-partner violence have improved over the years, but to many, these are still internal family matters, best left alone. Quite the opposite.

Infectious diseases like Ebola do have the capacity to spread and undermine the political and economic stability of a nation, and then a region.

But so does violence against women.

In fact, the very best predictor of a state’s stability, economic growth and peacefulness is not the level of wealth, democracy or ethnoreligious identity. “It’s how well its women are treated,” says Dr. Valerie Hudson, author of “Sex and World Peace” and professor at the Bush School of Government and Public Service at Texas A&M University. She based her conclusion on a decade’s worth of research and the largest extant database on the status of women worldwide — which she and a team of researchers have been building.

“Women’s advancement is critical to stability and to reducing political violence,” Hudson and Harvard University's Dara Kay Cohen wrote in a recent New York Times op-ed, arguing against possible cuts to women’s programs by the Trump administrations. “Countries where women are empowered are vastly more secure, whether the issue is food security, countering violent extremism or resolving disputes with other nations peacefully.”

As the US turns a spotlight onto Russia, given its meddling in the US election, it's worth telling the whole story about national security. We’ve read about Vladimir Putin’s rising authoritarianism; the crackdown on civil liberties; the aggressive, expansionist military moves into Syria and Ukraine. It's time to read more about violence against women, and how that oppression correlates with national insecurity, terrorism and stunted economic growth.