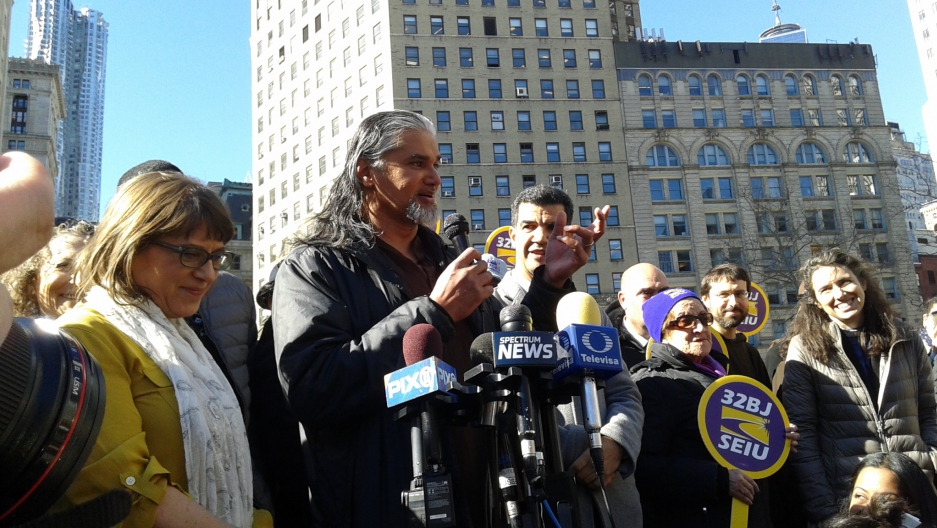 Migrant rights advocate Ravi Ragbir talks to his supporters in New York City before going into the federal building for a scheduled check-in with immigration authorities on March 9, 2017. “When I look out at you who has come out for me, I’m overwhelmed. This is a sea of love, this is the Katrina that is going to overtake any wall that’s going to be built,” he said. “I thank you because I know you are here for me and many others.”

Ravi Ragbir is a popular immigrant organizer in New York City. He’s been running the New York City Sanctuary Coalition for nearly a decade, and supporting migrants who are either detained or threatened with removal.

But now his own private struggle with deportation has become a big part of his work.

On Thursday, he took a dozen people with him to a scheduled meeting with immigration agents. He came to the US as a legal permanent resident, but was ordered deported after being convicted of an aggravated felony in 2001.

Ragbir was ready to be deported at his check-in; he knew he’s among those who could be affected by the Trump administration’s more strident approach to undocumented immigrants. But after about an hour, he was allowed to walk free Thursday —  at least until his next appointment on April 11.

Immigration and Customs Enforcement (ICE) officials told Ragbir that his current suspension of removal, in which agents use their discretion not to deport people, will be valid until 2018, but he must report back next month and start preparing travel documents to return to his native Trinidad, which he left in 1994.

“When I speak about how I feel, I cannot breathe,” an emotional and weary Ragbir said to the small crowd who rallied in his support outside the federal building in downtown Manhattan. “If everything stays the same, I shouldn’t be checking in next month. I hate to be the bearer of bad news, but I’m a realist. I need to prepare for what could happen.”

New York University law professor Alina Das is Ragbir’s longtime lawyer. She too said that the request for travel documents was a surprise. “That was incredibly upsetting, because it’s usually the first step in deportation,” she said. “We will comply, as we’ve always followed all the rules, but it’s our hope that, at the end of the day, they’ll still grant discretion in his case.”

Ragbir came to his annual check-in at 10 a.m., as the government requested, in the civic center of lower Manhattan.

As has been done for countless other immigrants, a squad of private citizens waited outside to show their support. They walked with him to the front of the building, chanting, “We ain’t gonna let nobody turn us around!”

About 12 people — his wife, lawyer, religious leaders and local elected officials, including New York City Council Speaker Melissa Mark-Viverito and Bronx State Senator Gustavo Rivera — went into the building with him. Two rabbis escorted him, arm-in-arm, to the entrance. The whole group went up to the ninth floor for his appointment. Only Ragbir and his lawyer were allowed to meet with immigration agents.

Ragbir was convicted for wire fraud in 2001, after the mortgage company he worked for was investigated for processing fraudulent loan applications. He served a five-year jail sentence, then spent two years in immigration detention. He was ordered deported in 2006. He is currently seeking to have his conviction vacated — his lawyer says procedural and legal errors were made in the case — and then win back his legal permanent resident status.

But his case is unlikely to be heard before his next appointment with immigration agents on April 11.

Follow: Keep up with Ravi Ragbir as he navigates the immigration system.

While Trump’s policies toward immigrant communities might work against Ragbir’s personal case, they have brought attention to his broader cause. Ragbir and his partners at the New Sanctuary Coalition say they’ve never seen so many volunteers step forward to go to ICE appointments with undocumented immigrants.

Retired Brooklyn professor Jerome Schneewind and his wife Elizabeth attended Ragbir’s rally because they are concerned about a new wave of anti-immigrant sentiment and the fear of Muslims.

“I object to what Mr. Trump is doing about immigrants,” he said. ”This country has been built by immigrants and I welcome the Muslims, and I welcome the Chinese, and anybody else who wants to come. ... Any little bit we can do, I want to help with.”

PRI reached out to ICE several times for comment on Ragbir’s case, and the use of community supporters at check-ins, but the agency did not reply. It is unclear if Ragbir’s supporters had any effect on immigration agents’ decision on Thursday.

Both Ira Mehlman, media director of the Federation for American Immigration Reform, and Jessica Vaughan, policy director at the Center for Immigration Studies, organizations that favor a reduction of the number of immigrants in the US, said Thursday's decision by ICE is aligned with current immigration laws, which the Trump administration seeks to enforce.

“I do not think that Mr. Ragbir is being personally targeted,” said Vaughan. “But I do think that ICE is reviewing the cases of all of the many people who were allowed to stay under the Obama administration, despite the fact that there was no legal basis for them to do so.”

Mehlman said Ragbir should not have been allowed to stay in the country for so long after his deportation order. He said that, “the American public is being denied the justice they deserve when our legal system allows these sorts of abuses.”

Other high-profile recent cases include Guadalupe García de Rayos, a mother in Phoenix who was removed from the US in February after a routine visit with immigration officials. Juan Carlos Fomperosa Garcia, a single father also in Phoenix, was deported under similar circumstances last week.

During Ragbir’s check-in, supporters circled the building in silent prayer. It’s a weekly practice organized by the New Sanctuary Coalition called the Jericho Walk. Like its biblical reference, volunteers hope their motion and invocation can end what they see as injustice. When Ragbir emerged from the federal building, he delivered the mixed news of his short-term release.

“[We need] to end this for me and for anyone who goes through this,” he said, fighting back tears. He promised that he will not be deported quietly.

But he reminded the crowd that there are many others who would benefit from the same outpouring of community support.

In the 2016 fiscal year, ICE deported almost 250,000 people. According to data obtained by the the Transactional Records Access Clearinghouse at Syracuse University, over 100,000 people in that same time frame were given relief from deportation by judges or through ICE’s discretion.

Ragbir’s wasn’t the only tough news of the day for his coalition. Ramesh Jajadhar Palaniandi, another member who also paid a routine visit to the ICE office, was taken into custody.

The New Sanctuary Coalition says Palaniandi has been living in the US since 1992. He is married to a US citizen and is the caretaker of one surviving parent, also a US citizen. The coalition held a vigil Thursday evening near the Varick Detention Center in downtown New York City to demand his release. This morning they planned to ask supporters to write letters to New York Governor Andrew Cuomo’s office to intercede in the case.

On Foley Square, Ragbir told the crowd that that local politicians Mark-Viverito and Rivera were still upstairs, waiting with a woman whose husband was taken in.

“This is what we need, we need to get them engaged,” he said. “They’ve seen this. They’ve seen the darkness. We need to bring the light now into that space.”

“We’re gonna walk the walk, we’re gonna to talk the talk and we’re gonna stop this for everyone,” he said, fighting back tears.