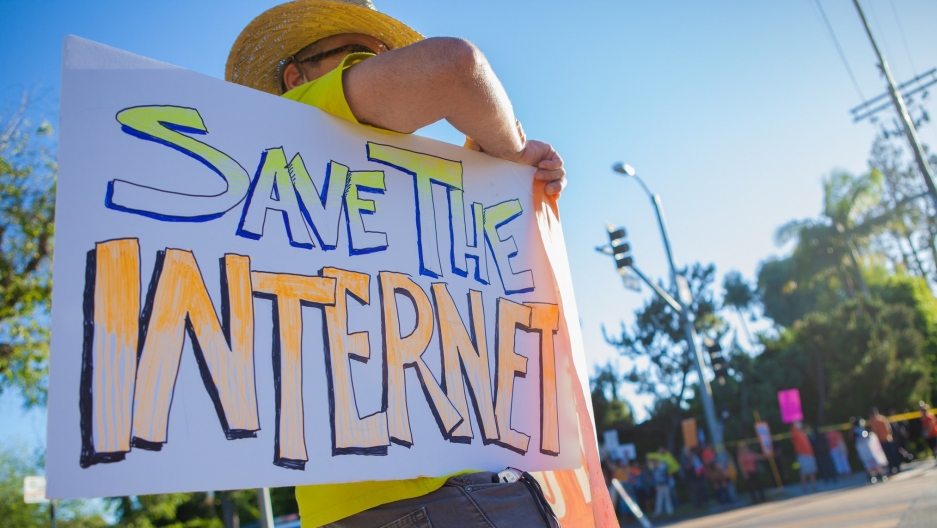 An activist holds a sign at a 2014 rally for net neutrality.

In 2015, after much public debate, the Federal Communications Commission passed rules mandating net neutrality — the idea that all data should be treated equally by internet service providers. The rules labeled broadband internet a utility under Title II of the Telecommunications Act. Under the new regulations, internet providers can’t block or throttle legal traffic, or prioritize certain traffic in paid “fast lanes.”

In an interview that year, then-FCC commissioner Ajit Pai called net neutrality “a solution in search of a problem.” Instead, he said, policies should focus on bringing greater competition to the American broadband marketplace.

Now, Pai is the newly appointed chairman of the FCC, and his perspective has some wondering what net neutrality might look like in this administration. In a press conference after his first FCC meeting as chairman, Pai told reporters, “I favor a free and open internet, and I oppose Title II.”

Jon Brodkin covered the January FCC meeting for Ars Technica. “I don't think unregulated entirely is what he wants,” he says. “But he wants to eliminate the Title II classification, which … requires internet providers to be just and reasonable in their practices and rates. And by getting rid of that, that would also get rid of the net neutrality rules.”

“In general, he’s said that he thinks internet service providers should be unfettered by regulation, you know, so they can spend their time or money investing in their networks instead of following rules.”

“We have a very broken marketplace in the United States, and absent government intervention, there's no reason that would change,” she explains. “There's no real competition to the local cable actor in most American places.”

Towns often have just one big internet provider, she says. “So, they're not under any pressure from either competition or oversight to upgrade networks to fiber, to lower prices.”

“Look, they're not acting nefariously. It's just not in their interest to invest, to support economic growth and social justice, which is what we need from infrastructure. Most other infrastructure in America is not controlled by private parties.”

Brodkin explains the lack of competition: While it’s illegal for a city to give exclusive contracts to cable companies, “that doesn't mean that there has to be multiple companies,” he says. “Ultimately, it's the decision of private providers as to whether it's worth going into a city or town.”

He describes sole internet providers in an area as “de facto” monopolies, not legal monopolies. “Because when Comcast controls the customers in a city or town, it's just not financially feasible for another provider to come in.”

In February, the FCC dropped an investigation into a practice known as “zero-rating" — when mobile carriers and internet providers don’t count traffic from certain content or services towards customers’ data caps. As Brodkin explains in ArsTechnica, questions were raised about zero-rating because carriers like AT&T and Verizon can use it to promote their own video-streaming services, “while charging other video providers for the same data cap exemptions.”

In a statement after the investigation was stopped, Pai explained that “these free-data plans have proven to be popular among consumers, particularly low-income Americans, and have enhanced competition in the wireless marketplace.” But for Crawford and others, zero-rating is a clear link to net neutrality.

“The prior FCC said that AT&T’s sponsored data plan, which is that zero-rating kind of plan, looked like it was not lawful under the existing open internet rules,” Crawford says. “They did that in a report issued right before the Pai FCC came in. And Pai has now pulled that report off the table, along with a report saying that investment in infrastructure by government is a really good idea.”

For Crawford, there’s a clear pattern in the new chairman’s approach to internet regulation. “Pai is interested in just helping the existing carriers do whatever they want,” she says. “And that's what we're going to be seeing out of this FCC.”