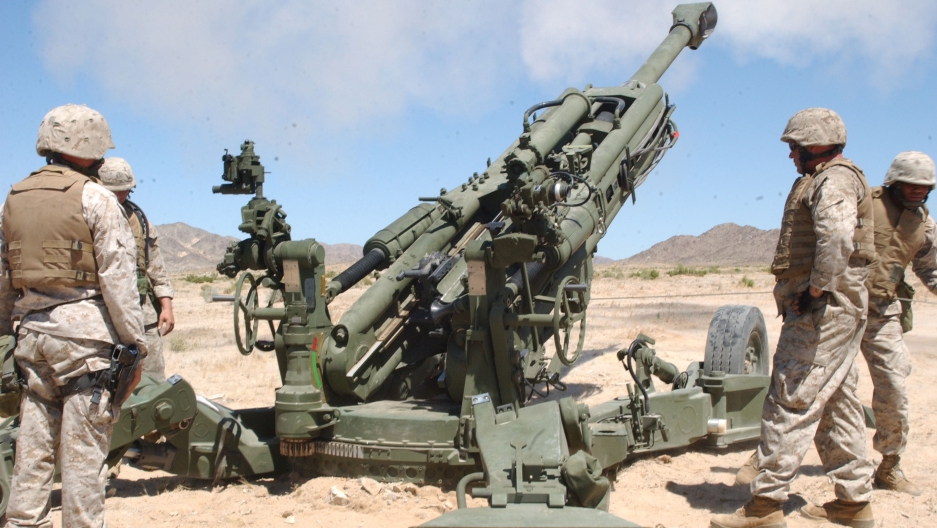 Hundreds of US Marines have been deployed to northern Syria to support an upcoming offensive against the ISIS capital of Raqqa, according to US defense officials.

Some 400 troops will set up an artillery outpost roughly 15 miles north of the city, ahead of a long-planned attack by a US-backed Kurdish and Arab coalition of fighting groups. Attack helicopters have also been sent.

Although several hundred US special forces troops have been active in the area for some months now, the move marks the largest deployment of America's conventional forces in Syria since the civil war began six years ago. It may be just the first of many, as the battle for the vitally important city heats up.

The US-backed Syrian Democratic Forces, comprising Kurdish and Arab Syrian fighting groups, has been making steady progress toward Raqqa, cutting off a key escape route out of the city just days ago.

Raqqa is ISIS’ last major stronghold in Syria, and the de-facto capital of its so-called caliphate. The group has already lost half of Mosul, Iraq — the largest city under its control. US forces hope to heap pressure on it from both sides so its fighters are not able to regroup.

Casualties are mounting. On Thursday, warplanes thought to belong to the US-led coalition against ISIS attacked the countryside around Raqqa and allegedly killed 23 civilians, including eight children, Reuters reported, citing the Syrian Observatory for Human Rights.

So does this mark the beginning of a more aggressive US policy in Syria? Yes, and no.

The deployment has actually been “in the works for some time” one defense official told The Washington Post. It was not part of Donald Trump’s promised revamped plan to defeat ISIS.

The Pentagon told PRI that the US role in Syria "isn't changing."

“Much like in Iraq, you will see coalition forces enabling logistics, intelligence, targeting and defending friendly forces arrayed against ISIS in Syria.”

Nevertheless, it does mark an escalation for US involvement in a messy civil war that has drawn in regional powers like Iran and global rivals like Russia.

After initially backing various rebel groups in the hope of ousting Syrian President Bashar al-Assad, Barack Obama later shifted the focus to defeating ISIS. This week’s deployment is just the latest commitment to that aim.

But that isn’t all US forces are doing in northern Syria. They now find themselves more committed to a labyrinthine patchwork of allies and enemies with varying objectives.

Related: A female former Marine speaks out about nude photos of servicewomen

Aside from ISIS, there are now three major local powers operating in the northern stretch of the country. Turkey-backed rebels — with a more Islamist outlook — occupy a pocket of land along the Turkish border from Jarablus to Afrin. Either side of that are areas dominated by Kurdish fighters and some smaller allied Arab rebel groups. To the south, Syrian government troops.

This map shows areas of control in Syria, divided among the Syrian government, Syrian rebels, Kurdish forces and ISIS.

Here’s where it gets even more complicated.

The US is allied with both the Turkey-backed rebels and Kurdish fighter groups — but those factions bitterly oppose each other, and fighting has recently broken out between the two.

The situation became so severe that the US deployed forces between the two to prevent them from fighting and to ensure the focus remains on ISIS. Pentagon spokesman Capt. Jeff Davis told reporters that the forces were there to be a “visible sign of deterrence and reassurance.”

Related: Yemenis want revenge after the US attacked their village

Turkey considers the Kurdish fighters a threat to its own security because the main Syrian Kurdish group is closely linked to a Kurdish rebel group on Turkey’s side of the border that’s been battling the Turkish state for decades. The Syrian rebel groups allied with Turkey also view Kurds with suspicion because they say the Kurdish rebels haven’t fought Assad with the same zeal that they have.

Kurdish groups have had to fend off rebel attacks throughout the civil war, as well as from ISIS. Despite largely staying out of the fight between rebels and Assad, a large stretch of Kurdish majority areas now sits beyond Syrian government control.

With fulsome US support, the Kurdish-led SDF will spearhead the offensive in Raqqa — a majority-Arab city. But as the situation along the border shows, defeating ISIS is only part of the problem.