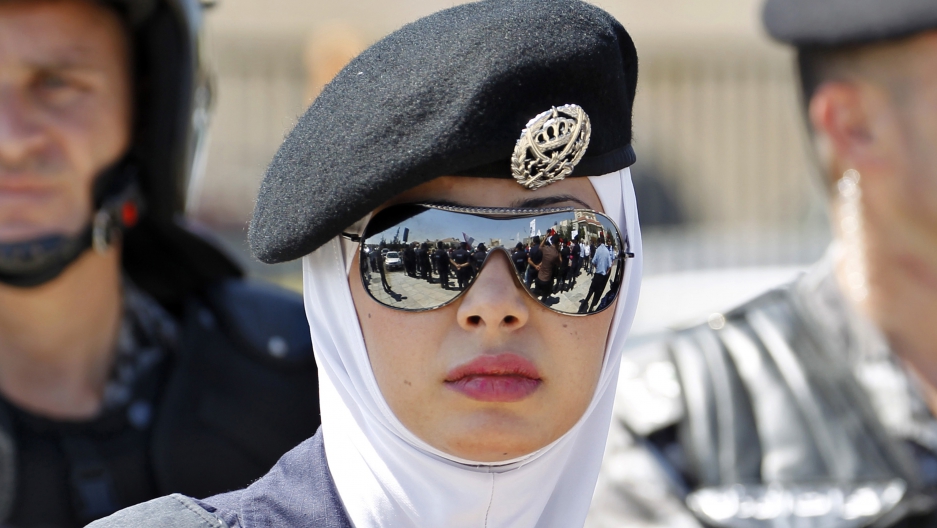 A Jordanian police woman stands guard in front of the US embassy in Amman, on Aug. 31, 2013.

Asma Khader's office in the heart of Amman is big and roomy. Her desk is cluttered with paper, magazines and books. But right at the edge of the desk, in the more organized part, there's a handwritten note carefully preserved in a rectangular frame. It's from her father. 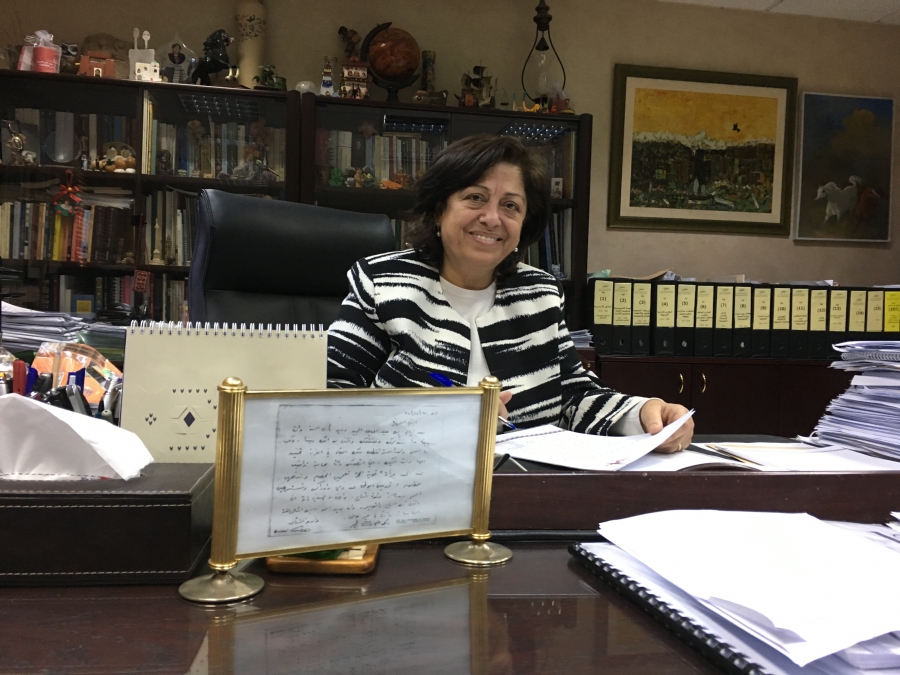 Asma Khader is shown at her office in Amman.

"Christmas is coming and you are stay[ing] alone in Damascus studying law," it starts off. "We miss you. But I always see you as a lawyer."

The letter is from 1972, when Khader was a law student at the University of Damascus in Syria. She had to move there to study because at the time, there were no law schools in Jordan. And she was determined to become a lawyer.

After all, she was the one who had "defended the rights of her classmates" at age 12.

“I organized a trip to the cinema with 10 girls,” she recalls. “We went as a delegation to every family to encourage them to allow their daughters to come with us. Some would say, ‘No, you’re just girls. You can’t go alone.'"

But Khader persisted. And in the end, the girls managed to convince their families.

Khader was the first in her family to study abroad. When she finally became a lawyer, she was one of only six female lawyers in Jordan. She went on to become the minister of culture, and today, she heads the Jordan chapter of an international organization called The Sisterhood Is Global Institute.

If you want to know how women, in general, are doing in this country, Khader is the woman to ask. And she'll be the first to tell you that her country has a serious problem: Most Jordanian women are staying home and out of the workforce.

“We are losing half of the available human resources,” she says, “which is really a big loss.”

Estimates vary, but according to the World Bank, in 2014 only 25 percent of women in Jordan worked. That's one of the lowest ratios in the region — despite the fact that Jordanian women are highly educated. 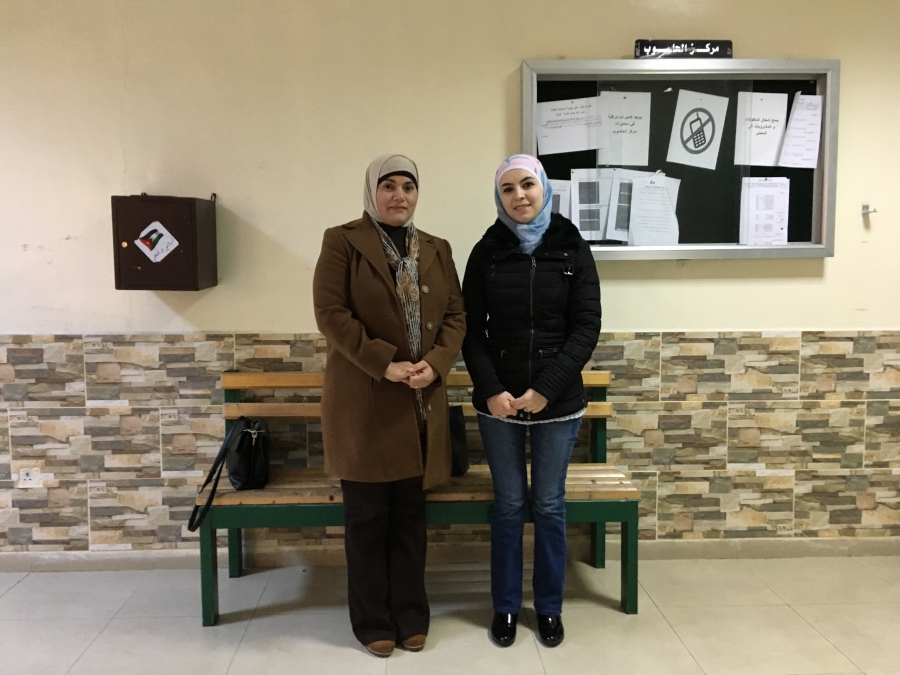 Graduate students Maram Ziead and Haya Ali at the University of Jordan talk about the challenges of finding a job in Jordan.

All it takes is a walk down the halls of the University of Jordan to see how many of the students are women.

Maram Ziead graduated from the women's studies program two months ago, hoping to find a job related to her field of study. Since then, she’s sent emails, submitted applications online and checked out ads in the newspaper.

“Unfortunately, until now nobody [has] answered me,” she says.

Ziead used to be a teacher. And she liked teaching. She was paid the equivalent of $300 per month. But since there's no subway system in Amman, the bus is unreliable and taxis are expensive, she had to buy a car to get to work. A lot women here don't feel safe on public transit, anyway.

The costs started to add up for Ziead. “The money, it’s very little. I felt that I started to pay from my pocket to them more than what they gave me,” she tells me.

Soon, she found out that a male colleague was earning three times what she was, for exactly the same work. "The head of the school said because he’s a man and he’s married, he has to spend money on his family,” Ziead remembers.

Ziead, by the way, is also married and has kids. Frustrated, she quit teaching. She thought getting a master's degree would improve her chances of landing a better-paying job. She borrowed money to pay for school. But at least so far, things are not looking good. I ask her if she thinks it was a good idea to pay for a higher degree. "If I think about it in this way, I feel sad," she explains, "but when I think without feeling, no. When I study, I open my mind. That makes me feel happy from inside." 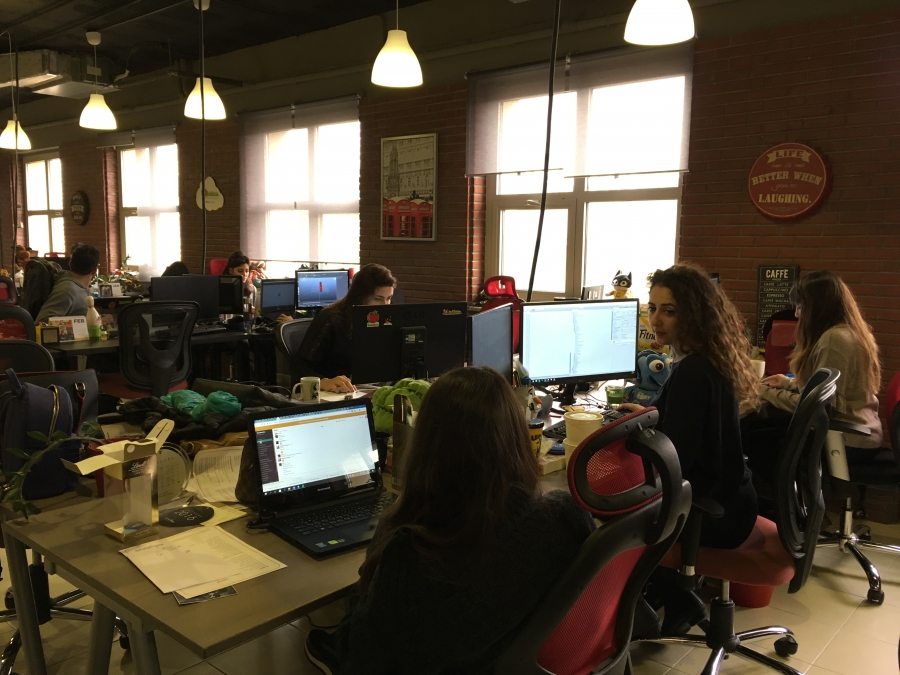 A number of women work at Tamatem, a mobile gaming company in Amman, Jordan.

Other female students I spoke with had their own versions of the same story. They could probably find jobs in the public sector, which employs more women than the private sector does, in fields like health care and education. But who wants to be paid less than a co-worker with the same responsibilities?

And so, disillusioned, some women have started their own businesses. Women like Sima Najjar, who founded ekeif.com. It's the "eHow" of Jordan. Four years ago, at 29, Najjar owned three businesses. She ran a modeling agency, ekeif.com and Pink Dust, a boutique that sells products by Arab designers.

Then, she got pregnant. And there she was, faced with the same question working mothers all over the globe, from Manhattan to Amman, have to answer: how to juggle work and a baby. "Everyone was like, 'Oh, wait until you have children and then you will stay at home,'" she says. "They always had this image that if you're working, when you have children, you have to quit and you have to sit with the children."

This is a culture that highly values marriage and motherhood. Numbers show that Jordanian women have more children than women in the neighboring countries. But when employees become mothers, there is little support for them.

The good thing about owning her own business, Najjar says, is that she could set her own rules. She decided to do something no one around her had ever done. She took her daughter, Farah, to work.

"It was shocking for people to break the rules. [They said,] 'They should be at a nursery or ... not with you working,'" she recalls. "But slowly, they got used to it." Najjar did the same with her second child, Laith. "He actually attended three or four workshops with me," she says with a laugh.

I stop by Tamatem, a mobile gaming company, to hear what Hussam Hammo makes of all this. He's a young, savvy CEO. He started his company in Silicon Valley, then moved it to Amman. He says that when he looks at resumes or interviews candidates, he doesn't think about gender. He actually employs more women than men. He understands that Jordan lags behind when it comes to women in the workforce. The way he sees it, the problem runs deep. 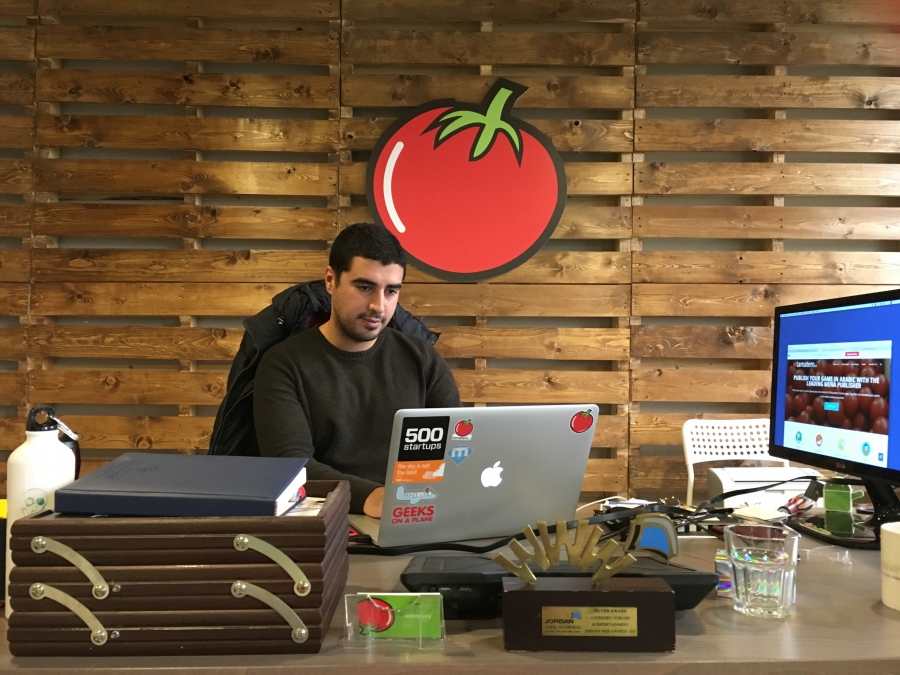 Hussam Hammo is the founder and CEO of Tamatem, a mobile gaming company in Amman, Jordan.

"The families and the culture is telling women, 'Don't take something that can make you tired, you will just take a temporary job for a couple of years until you get married and you go figure something out with your life,'" he explains. "For me, this is a very bad investment if I want to invest in someone who is thinking that, 'OK, this is a temporary period of my life, and then I will say goodbye and leave so maybe most of the CEOs of the companies will invest in someone who can stay with them for 10 years.'"

Hammo says Jordan needs to revamp its education system to get more women in science and technology. These fields open up a lot more doors.

I ask Asma Khader, the human rights activist and lawyer, what needs to happen in the short term to get more women to work. For starters, she says, the country should fairly implement labor laws that are already on the books. But also pass new ones that require compulsory kindergartens, equal pay and protection against sexual harassment. Khader thinks these are critical for Jordan's economy.

"Look, it's a survival policy that we need all women and men to be in the workplace and to be productive. It's a must," she tells me. "The main challenge is how to balance between the very conservative mentality and patriarchal mentality that still exists and this new approach and need. Women are now more aware about their rights and responsibilities. But you know, enjoying rights is a responsibility by itself. You need to pay some effort if you want to enjoy your rights."

She means that Jordanian women should also get active, speaking up and pushing for change. In the end, Khader doesn't see this as a fight between men and women. Just a fight between the past and the future.