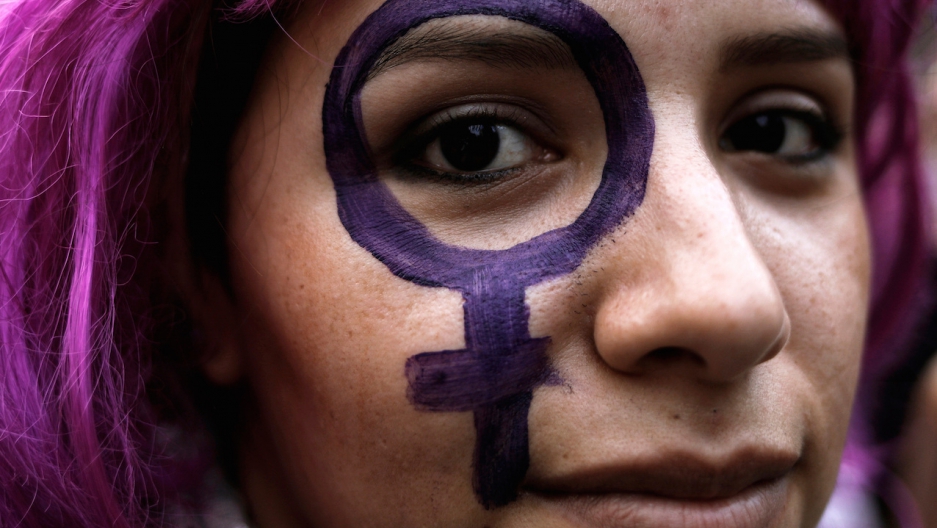 A demonstrator takes part in a march on International Women's Day in Sao Paulo, Brazil, March 8, 2017.

When I got to work this morning, I fished out my red lanyard and thought, oh good, at least it’s red, I’ve done something for International Women’s Day, which this year is also A Day Without a Woman. But as I swiped my key card at the door, I had another, much scarier thought. What if all the other women at The World — the radio show where I work, not the planet — had gone on strike but not told me? What if I were the only woman to show up?

I peeked into the newsroom as I swiped again. (It now takes three swipes to enter the inner sanctum.) There was Jeb Sharp, an editor, talking to Nina Porzucki from The World in Words podcast, and April Peavey, the show director, already busy at her desk. Shirin, Joyce, Catherine, Rachel, Carolyn, Lizzy, Lidia Jean, Rupa, Carol, Isis, Sophie, Alex. They were all there. Whew.

Now it might sound incredibly paranoid, I know, to think that the rest of the staff would strike and not tell me. But it actually happened to me, 40 years ago, at my first engineering job, when I was the only woman engineer on a staff of 50.

I showed up for work one afternoon and all the other engineers, all the men, had called in sick — work action to protest a snag in contract negotiations, or something like that. But they neglected to tell me, because I was a woman. They didn’t trust me; they thought I might be a management spy.

In the control room, panicky managers were trying to figure out how to run the studio lights, cameras, switcher, and teleprompter for the nightly news. They looked at me with relief. “Oh, thank God, you’re here.” I knew them all. We hung out after work, went to parties together. But they were management and I was union.

“How do we turn on the teleprompter?” someone asked. “I don’t know,” I lied. “Have you ever run a switcher?” “No,” I said. That at least was the truth. I kept this up all night, deflecting their cries for help, being loyal to the union, though they hadn’t been loyal to me.

Four decades later, after working as an engineer, a producer, a catering chef, a proofreader, a disco DJ, a copy writer, and a pickle vendor, I’m working once again as an engineer. And frankly, it’s great to be in a union again. I make overtime when I stay late. I am one of the last people in America to enjoy a lunch hour. And for the first time in decades, I know for sure that I make as much money as my male colleagues, because it’s all spelled out, right there in black and white, in the union contract.

Back to all those women who are working in the newsroom right now, on International Women’s Day. Why didn’t we organize something? Are we too busy, too frantic? Do we have too many commitments to work, home, and family? Are we all such good girls that, without thinking, we just always show up?

I’m reminded of something my sister-in-law told me. She blamed the demise of the lunch hour on women. Because when she first started in the work world, even earlier than I had, the men still took three-martini lunches. The women worked right through lunch. They had too much to prove to take that time off.

But, is that really why we showed up today? In our field — journalism — showing up to work means speaking up. Staying home means staying silent.

“For me, the greatest act of rebellion is simply showing up and getting things done,” one of our data journalists Sophie Chou said, though she added: “I support all the women who chose to strike and I think it makes a big impact, depending on the industry and field.”

“I did consider not coming to work,” editor Jeb Sharp said, “but it would have meant not editing a piece about women in Jordan pegged to International Women’s Day. Neither option, coming in/not coming in, felt right.”

A couple of our gracious male colleagues here at The World provided bloody marys for the women today. While the women gathered in an office to drink them, I proofread this essay. By the time I was finished, though, and rushed out to claim my drink, the party office was empty, and all the women had returned to their desks. And I think most of them, myself included, had virgin cocktails. There’s a lot of vodka left.

Bloody marys for everyone after the show!

Louie Cronin is a member of The World’s team and a fiction writer. Her first novel, Everyone Loves You Back, was recently published by Gorsky Press.