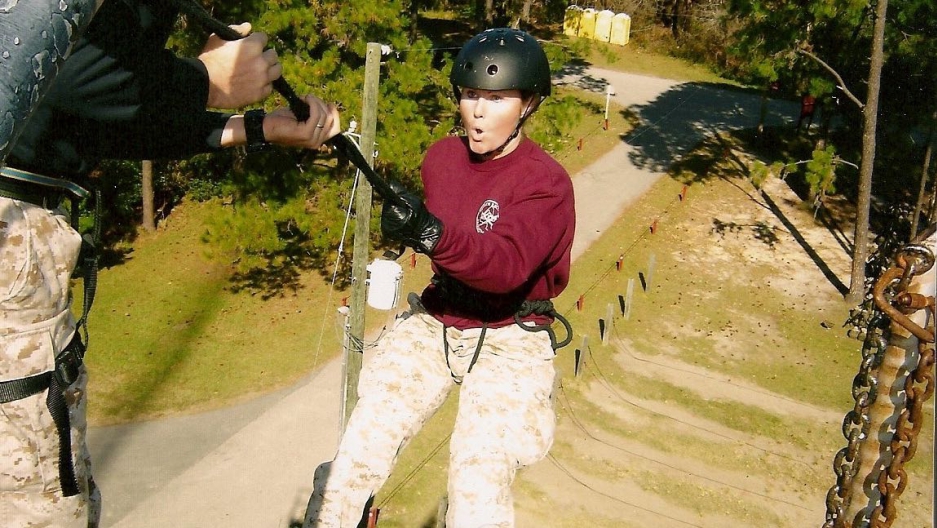 This snapshot shows Kate Hendricks Thomas when she was an active Marine.

When Kate Hendricks Thomas was an active Marine, she always had a weapon on her whenever she entered the bathroom on base.

"You didn't go to the shower trailers without your weapon and probably a knife to carry into the shower stall with you," she says. "There was always that ubiquitous fear of sexual assault."

Thomas, who served in the Marines from 2002 to 2008 and is now an assistant professor of health promotion at Charleston Southern University, also carried around a can of black spray paint to cover over the lewd things written about her on the bathroom walls by male Marines.

"All over the forward operating bases, I kept finding these really graphic cartoon depictions with verbal narratives off to the side that obviously several people had contributed to, talking about what sexually they would want to see me do or do to me."

Thomas says she and other military women typically endure sexual abuse on the job, and so she was not surprised to learn that a secret Facebook group page, called "Marines United," with a following of 30,000 Marines, all male, had posted hundreds of nude photos and other demeaning images of female Marines. All without consent. Not only that, but identifying information for many of the women was also shared among group members.

The allegations arose over the weekend in a report from The War Horse on the Reveal website. "The photo sharing began less than a month after the first Marine infantry unit was assigned women Jan. 5," the Reveal story by Thomas James Brennan reads.

Members of the Facebook group were invited "to collect, identify and share photos of naked or scantily clad servicewomen," the Reveal story says.

The scandal has sparked a discussion about sexual harassment in the military.

"Technology has made harassing behavior global," says Kate Hendricks Thomas, who co-wrote an editorial about it in The Washington Post. "I fear for the women Marines who have to deploy knowing that 30,000 of their brothers saw this and either actively participated in sharing or making the comments or passively watched it happen and didn't report [it]. I would have a serious problem going to war knowing that my back wasn't covered."

Thomas says that not only is sexual abuse pervasive in the military, but sadly, it is accepted as a fact of life among its victims.

Related: US Marines are deploying to fight ISIS in Raqqa, Syria

"Women officers, we don't want to embrace a victim narrative. It's not who we are as people, and we don't want to be any further marginalized than we already are," she says. "And I've heard from a lot of service members that when things happened that were straight-up criminal, they were counseled not to file a formal complaint because it would look bad for the unit, it would be a black eye for everyone."

The military's higher-ups have condemned the Facebook page, and they plan to investigate the situation. Thomas says she hopes for criminal prosecutions of those Marines involved in the illicit postings, but she says it will take real change in the military's culture to make things right.

"The words are great," she says, "but we are looking for action."