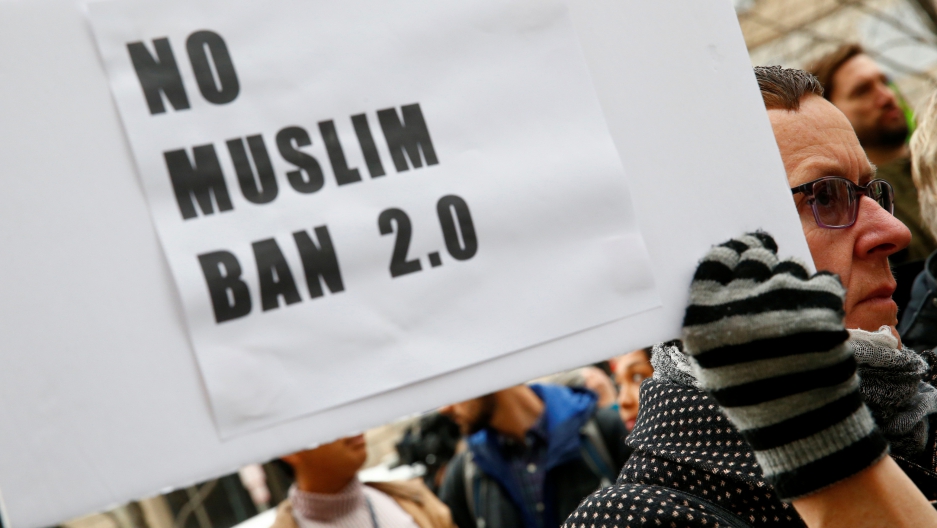 Immigration activists rally against the Trump administration's new ban against travelers from six Muslim-majority nations outside of the US Customs and Border Protection headquarters in Washington, on March 7, 2017.

On the campaign trail, President Donald Trump talked about a "broken" immigration system. He has made it his mission to fix it.

That involves building a wall along the US-Mexico border, sending "criminal, illegal immigrants" back to their home countries and banning people from certain Muslim-majority countries from entering the US. The president claims those initiatives will grow the economy and make America safe again.

David Martin, a University of Virginia law professor who specializes in immigration, says that although US immigration laws aren't perfect — many haven't been updated since 1990 — the policies that Trump has put forward aren't the solution.

Trump's focus on the wall and on the travel ban, he says, don't address the real problems around immigration today.

For starters, he says, walling off the US-Mexico border is "a major waste of money. The border defenses of the country have been given a lot of money over the last 20 years, and we've made a lot of headway there."

Separately, he says there are long-standing problems in the federal enforcement of "final orders of removal." A person subject to removal, he says, can make a case that they're seeking asylum and therefore petition to stay in the country or make the case that they were wrongly charged. Usually, says Martin, a final ruling by Immigration and Customs Enforcement can take months to be issued. And because of a backlog of pending cases, it can take years for a final decision.

In the end, there is a poor track record of enforcing these final orders of removal, he says.

Another thorny issue has to do with how to handle "overstays" — students or tourists who come to the US on temporary visas, business visas, in some cases — and then remain in the country after their time is up.

This group makes up 40 percent of the unauthorized population living in the country, according to Martin. Recent studies, he says, have shown that the number of overstays exceeds the number of people who sneak in across the border.

But on Monday, Trump rolled out the second edition of his travel ban, barring people from six Muslim-majority nations to the US. That perhaps creates the biggest challenge with the international community, Martin says.

"The ban is counterproductive as it sends a negative message to certain parts of the world. It feeds in to the recruitment strategies of ISIS and al-Qaeda by painting a picture of the US as hostile to Muslim nations," says Martin.

"A lot of effort went in during the George W. Bush and Obama administrations to try to emphasize that we are not condemning all Muslim nations, that we are working closely with Muslim communities in this country, and that's been very valuable and that's been our overall strategy against violent extremism."