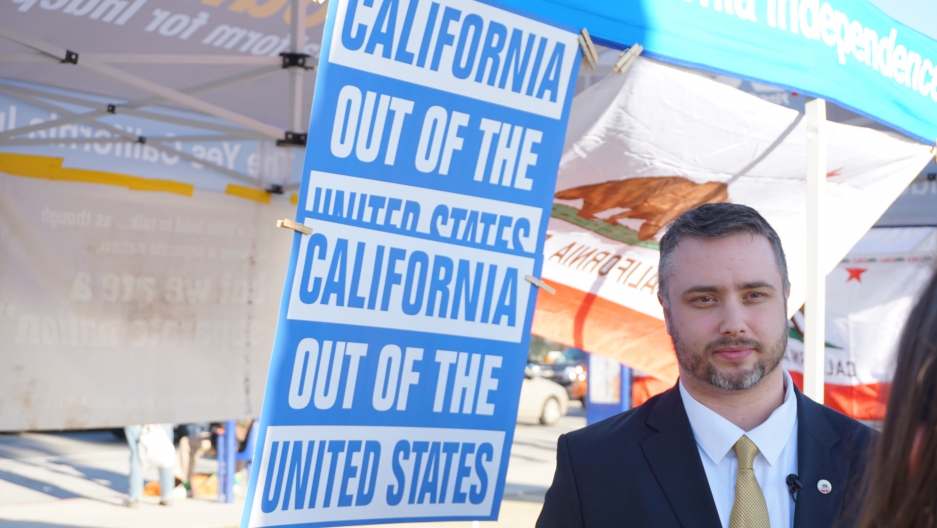 Louis Marinelli is head of the Yes California independence campaign, but he doesn't live in California. His home is in Russia.

On a recent warm and sunny day at a seaside park in Santa Monica, most people were out strolling and relaxing. But a few were engaged in a very different activity — trying to make California an independent nation.

“We’re gathering signatures to get a question on the ballot that would give the California people a chance for the first time in their history the decision about whether to remain a state in the union or become their own independent country,” says Louis Marinelli, the leader of the Yes California Independence Campaign.

The ballot proposition Marinelli and his fellow secessionists are trying to qualify calls for removing language in the state constitution that says California is an inseparable part of the United States. If it qualifies for the 2018 ballot and is approved by voters, there would be a second vote in 2019 asking Californians if they want their state to become a free and independent nation.

The Yes California campaign needs nearly 600,000 signatures to get on the ballot, but Marinelli feels confident about its chances.

The idea of California declaring its independence has been knocking around for years, but it was considered a fringe idea, the political equivalent of believing in alien abductions. The election of Donald Trump, and the anger and anxiety it caused in blue state California, changed all of that.

Since Election Day, Yes California says its mailing list has gone from a few hundred names to 160,000 and the number of its volunteers is up from 400 to 8,000.

Don Sutton, a real estate agent, is one of those campaigning for California independence.

“Our diversity is our strength,” says Sutton at the campaign event in Santa Monica. “Our economic power is our strength. Our natural resources are better than any place in the country. We can do this. We can totally do this. And I am shocked, shocked how many people, when I say something, they say ‘Oh yeah, it’s time. We got to get out of here.’”

Giselle Vega, who approaches the California independence volunteers for information, likes the idea of California saying goodbye to the US.

“America does not share our values," Vega says. “That is painfully evident.”

Vega believes living in an independent California would be better for gays and minorities than staying in a country led by President Trump.

“California represents nothing that Middle America represents. We want inclusion and we believe in everybody having a right,” Vega says.

But there are big barriers in the way of California independence. For one, the US Constitution doesn’t grant a state the right to secede. That’s one big reason the Civil War was fought.

Then there are growing questions about Yes California’s ties to Russia. Yes, Russia.

Louis Marinelli, who is American, doesn’t live in California, but a dozen time zones away in the Russian city of Yekaterinburg, where he’s an English teacher and lives with his Russian wife.

And Marinelli has faced questions about Russian government involvement in the California secession cause. He and other secession supporters attended an anti-globalization conference last year in Moscow backed by the Kremlin. And the Yes California team has gone so far as to open up a self-styled California “embassy” in the Russian capital, in a space provided by the same anti-globalization group.

There’s been much talk among Russia experts about how the Kremlin supports separatist movements abroad to create discord in other countries, for instance in Ukraine. But Marinelli, had just arrived in California on a flight from Russia before this interview, denies that his independence movement for the Golden State has anything to do with Russia meddling in US politics.

Related: How Russia is testing Trump on Ukraine

As for the anti-globalization conference he attended in Moscow, Marinelli says many representatives from independence groups around the world attended, such as from Spain’s Catalonia region, and that there was nothing nefarious about the gathering.

Related: With its ex-president on trial, Catalonia is still pushing for an independence vote

Russia connections aside, Yes California still faces plenty of public skepticism. At the campaign’s signature gathering tent in Santa Monica, you heard many questions from voters about the cost and expense of independence and comments that fighting for secession was a colossal waste of time and resources.

The series is titled “Calexit.”