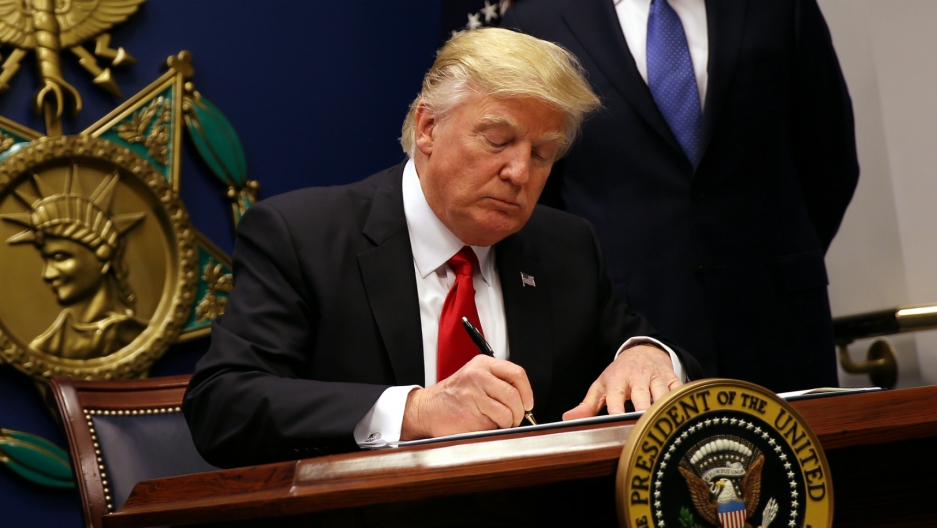 US President Donald Trump will unveil a revised ban on travelers from some Muslim-majority nations Monday — one with a reduced scope so Iraqis and permanent US residents are exempt.

After his first wide-ranging restrictions were slapped down by the federal courts, Trump will sign an order freezing new visas for Syrians, Iranians, Libyans, Somalis, Yemenis and Sudanese citizens.

Secretary of State Rex Tillerson, Homeland Security Secretary John Kelly and Attorney General Jeff Sessions were due to present the new ban at a press conference at 11:30 a.m. ET.

The first version temporarily closed US borders to all refugees and to citizens from seven mainly Muslim countries.

The State Department initially cancelled 60,000 visas, and hundreds of people were reportedly detained at US airports.

But Conway told Fox News that legal permanent residents and current visa holders would be explicitly exempt from the order.

She also indicated that Iraq would no longer be on the list of countries affected.

Iraqi officials had objected to their country's inclusion, which risked scuttling cooperation between Baghdad and Washington in fighting ISIS.

The US and Iraqi militaries are currently fighting side-by-side in northern Iraq, trying to wrest the city of Mosul from jihadist control.

The Iraqi foreign ministry on Monday expressed its "deep satisfaction" with the new executive order, and described it as an "important step" in strengthening relations between Baghdad and Washington.

There was chaos at major airports and mass protests while several district courts moved to block its implementation and lawmakers expressed opposition.

The troubled rollout also dominated the first weeks of his administration, leaving many with the impression that it was badly planned and badly implemented.

Trump has argued that the ban is needed to prevent ISIS and al-Qaeda fighters from reaching US soil.

But polls show that American public opinion is deeply divided on the issue. Most indicate a slight majority of voters opposed, with strong support among Trump's political base.

The Republican president criticized a court order suspending the ban as "a very bad decision, very bad for the safety and security of our country. The rollout was perfect."

The new order is meant to address complaints raised by the federal judges that parts of the first version were unconstitutional.

But organizations like the American Civil Liberties Union have indicated they will renew their legal fight.

"If the second Muslim ban has the 'same basic policy outcome' as the first, it will not pass legal muster," the organization's Jamil Dakwar said in an address to the UN Human Rights Council in Geneva.

Whatever the legal outcome, Trump's new ban is likely to polarize opinion further and be immensely popular with his hardcore of supporters.

The new order is also likely to sow further confusion about US immigration policies.

On Monday, Nigeria advised its citizens against all but essential travel to the United States, citing the lack of clarity on new immigration rules.

"In the last few weeks, the office has received a few cases of Nigerians with valid multiple-entry US visas being denied entry and sent back to Nigeria," said special adviser to the president Abike Dabiri-Erewa.

According to travel data firm Forwardkeys, travel from the United States to the Middle East has also fallen sharply.

The firm said round trips to the United Arab Emirates were down 19 percent and trips to Saudi Arabia were down 40 percent in the month following the ban.

"Since imposition of the travel ban, Middle East markets have been the worst affected, with bookings for departure in the next three months falling 25.4 percent behind the equivalent time last year," the firm said in a report released Monday.

But the ban is likely to help Trump divert attention from rolling crises on his ties with Russia.

The last week has seen his attorney general recuse himself from election-related investigations, after it emerged he met the Russian ambassador in Washington twice during the campaign.