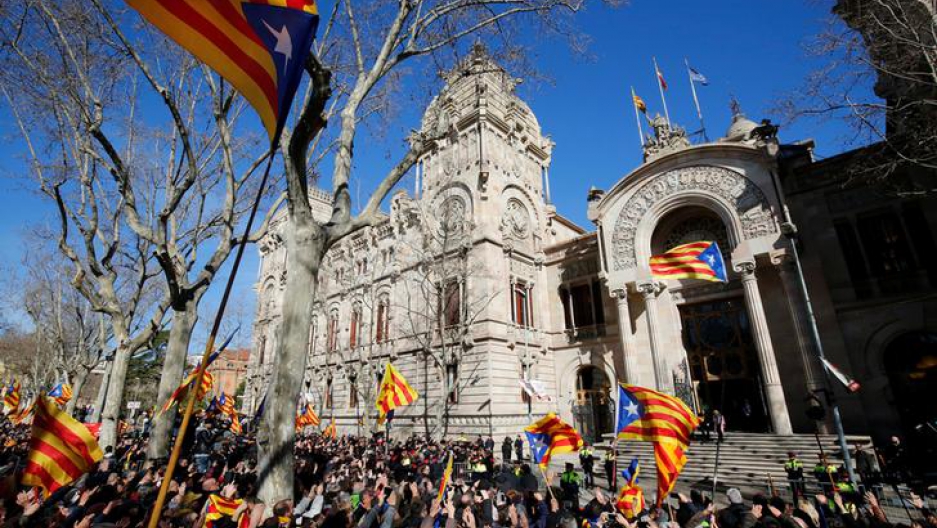 Former Catalan President Artur Mas and former regional councilors Irene Rigau and Joana Ortega leave court after attending the first day of their trial for staging a 2014 informal referendum on independence in breach of a legal order, in Barcelona, Spain, February 6, 2017.
Credit:

After years of limited autonomy under Spain, many Catalans are now asking for their right to self-determination.

But Spain is trying to block that move every step of the way, by declaring that the region's separatist government cannot call a referendum on independence. And on March 3, a top legal advisory body in Barcelona ruled that the Catalan government "does not have the authority to ... call a vote on the political future of Catalonia."

Artur Mas is Catalonia's former president (2010-2016) who defied Madrid by holding an unofficial vote in 2014. More than 80 percent of those who voted chose independence from Spain, but turnout was really low and opinion polls don't give a clear read on the issue.

On March 13, a high court in Catalonia ruled that Mas had “perverted democratic principles,” according to El País newspaper, barred him from holding public office for two years and handed him an almost $40,000 fine.

Marco Werman: As the former leader of Catalonia, you have been charged with civil disobedience for organizing an independence vote in 2014. What did you tell the judge in Barcelona?

Artur Mas: I told the judge that I would do it again. In 2014 we held a non-binding consultation. It was a way to know how broad the majority in favor of independence in Catalonia was, and the Spanish government fought against us and tried to avoid Catalan voting, but we succeeded in voting and 80 percent of the people who went to vote voted in favor of independence.

MW: So if that vote were to be held, if it could be held, do you think Catalonia would be independent?

AM: Well you never know, because our main challenge is to know how broad this majority in favor of independence is. So the best way to get to know that is to hold a binding referendum as the Scottish people did a couple of years ago. Remember that in September 2014, Scotland was granted a referendum on independence. This is what the Catalans also want.

MW: There is a vote coming up, another referendum in Catalonia later this year in September. What is that going to be about?

AM: Well exactly the question to be posed will be: Are you in favor of independence? Or against? This is the aim of the referendum to be held this year. So we will see because, again, the opposition of the Spanish government will be very strong. 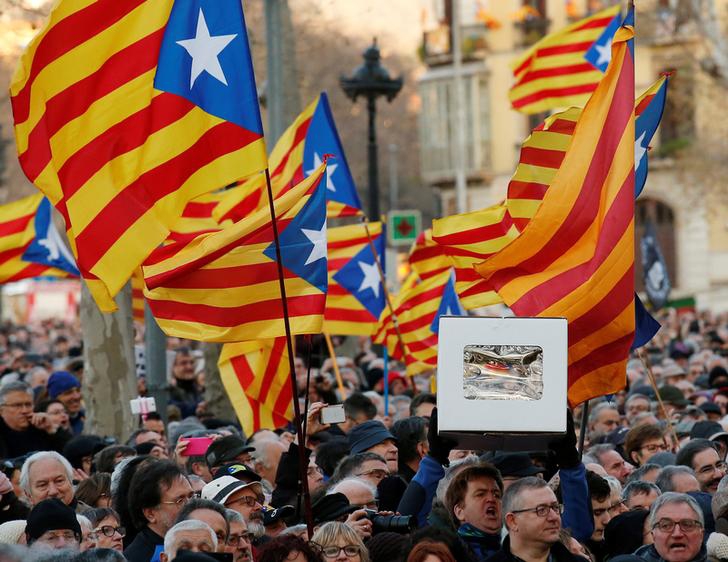 Protesters wave Catalan Estelada flags and hold up a faux ballot box as they await the arrival of former Catalan President Artur Mas outside court in Barcelona, Spain, Feb. 6.
Credit:

MW: I gather that during the trial last month 40,000 people were outside the courtroom supporting you. What do you think that tells us?

AM: I think that the main message these people wanted to convey was "President Mas, you are not alone. So if you fight for self-determination, if you defend the right of the Catalan people to decide our political future, then you won’t be alone. A lot of people will be beside you and giving you our support" — and that was a very impressive message, you know.

MW: Catalonia is seen as one of the most economically prosperous communities of Spain. Do you understand why people across Spain don't want to give up this valuable part of their country, I mean it would be like the US losing California?

AM: Yes, of course, but if they want to keep Catalonia inside Spain then they should love us a bit more.

MW: Do you not feel the love from the rest of Spain?

AM: No. No. Not the rest of Spain, but the institutions of the Spanish state. They hardly understand the culture of Catalonia, the identity, the language, the will for self-determination, the will to defend this right to decide our political future as all these nations in the world. And when you have this feeling that you are not respected, you are not loved, then you must try your own way.

MW: We see Europe going through a period of change with Brexit over issues about immigration and national debt. What do you say to the idea that as a lot of people are trying to keep Europe from falling apart, you're pushing for independence, which might cause even greater fracturing?

AM: But in our case it is radically different because we are pro-European Union, we are pro-accepting refugees in our country, so it's exactly the opposite way round. In fact, we have now an umbrella called Spain, but we would like to have a wider umbrella called a European Union. It is not a way to become an isolated country, it is just a way to become an independent country within the European Union. Of course if we win the referendum, and a "yes" vote wins, then we are absolutely willing to sit down at a table and negotiate everything with ... the Spanish government, the Spanish state and the European Union in Brussels, because it has to be a win-win operation for everybody. This is not a selfish movement for Catalonia. This is something that Catalonia aspires to be, an independent country with the EU but without damaging our neighbors.

Related: Why one American wants Catalonia to be Europe’s new nation

MW: It is a bit confounding to see how you will actually carry out the referendum in September considering that the Spanish laws and the constitution do not allow such a move. How will you do that?

AM: It’s difficult to do but in 2014 we did it, and in fact we did it without breaking the law. We tried to let the people vote. You know when you have demonstrations of more than 1 million people every year in favor of independence, you have to do something. So our aim is not to break the law. Our aim is to let Catalan people vote, and this is what we are going to do this year, although we know that there will be stronger opposition from the central government.

MW: Will there be violence?

AM: I don't think so. We are peaceful people you know.

MW: When you travel abroad, like when you come to the United States, do you see yourself as an ambassador of Catalan independence?

AM: Well I see myself as a person who is trying to help this democratic movement in Catalonia. When I'm here in the States, I always remember something that President John F. Kennedy said some decades ago. He said in one of his famous [quotes]: “The great revolution in the history of man, past, present, and future, is the revolution of those determined to be free.” And this is exactly the revolution that is being carried out in Catalonia, in my country.

MW: At the end of the day, if Catalans are presented with a referendum that is legal and is binding, do you think they would vote for independence, everybody?

MW: I don't know. This is the decision that will have to be taken by people. This is not my decision. I will vote yes of course. The polls say that maybe the "yes" vote will win by a very, very narrow margin. But we will see.

Editor's note: Opinion polls on Catalan independence have been very close. One recent survey shows the "no" vote ahead, while another says the "yes" vote has a slight lead.