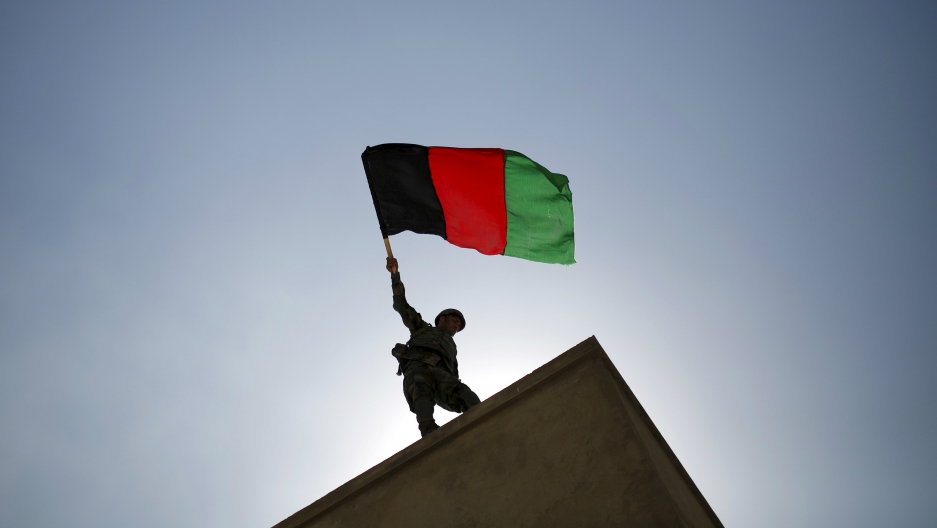 An Afghan National Army officer holds an Afghanistan flag during a training exercise at the Kabul Military Training Centre in Afghanistan, Oct. 7, 2015.

Here's one word President Donald Trump didn't say during his first address to a joint session of Congress on Tuesday: Afghanistan.

Hours after Trump's speech, two bombs ripped through Kabul. The first hit a police station and the second went off near the offices of Afghanistan's intelligence agency, the National Directorate of Security. The Taliban took credit for the attack, which killed at least 23 people and wounded more than 100 others.

The US Embassy in Kabul issued a statement condemning the attack. Trump, however, remained quiet.

America's invasion of Afghanistan began as a military operation to strike back at al-Qaeda after 9/11 and capture or kill Osama bin Laden. It turned into the longest war in US history. More than 2,200 US service members have been killed there and more than 20,000 have been wounded.

The new American president has said very little about what he plans to do in Afghanistan, but he won't be able to ignore the situation.

According to the US Special Inspector General for Afghanistan Reconstruction, the Afghan government lost ground against the Taliban and other militants over the course of last year. The government now controls less than 60 percent of the country. About a third of Afghans now live in contested territory.

"The numbers of the Afghan security forces are decreasing," SIGAR said in a report to Congress, "while both casualties and the number of districts under insurgent control or influence are increasing."

ISIS seems to be gaining ground, too. And while Trump has promised to destroy the group, he hasn't spoken to the specific challenges of battling ISIS outside its strongholds in Iraq and Syria.

Meanwhile, the US military campaign in the country remain very much active, despite the fact that combat operations technically ended in 2014.

Airstrikes this week have killed top Taliban commanders, and there are still 8,400 American troops on the ground training, advising and assisting Afghan forces. When you add in support from NATO allies, the total US-led force is about 13,000.

Will Trump bring those American soldiers home? Will he deploy more?

Trump said in 2013 that the US should "leave Afghanistan immediately." But in a recent conversation with Afghan President Mohammad Ashraf Ghani, he reaffirmed America's committment to the country.

We should leave Afghanistan immediately. No more wasted lives. If we have to go back in, we go in hard & quick. Rebuild the US first.

US Gen. John Nicholson, the top commander in Afghanistan, says he needs more boots on the ground. During testimony before the Senate Armed Services Committee in early February, he described "a shortfall of a few thousand" troops.

Nicholson also said worrying things about Russia and Afghanistan. (As though the Trump administration needed any more worrying Russia stories in the press.) He told the Senate that Russia had been seeking to undermine the US and NATO by spreading a "false narrative" that the Taliban was fighting ISIS in Afghanistan, but not Afghan police and army forces.

Figuring out US policy on Afghanistan is about more than just managing the war there. More than 15 years of US-involved conflict has helped create a massive refugee crisis. It's not clear whether that's a crisis Trump will help solve.

So Mr. President, we're asking: What do you plan to do in Afghanistan? Click here to tweet that question to the president.