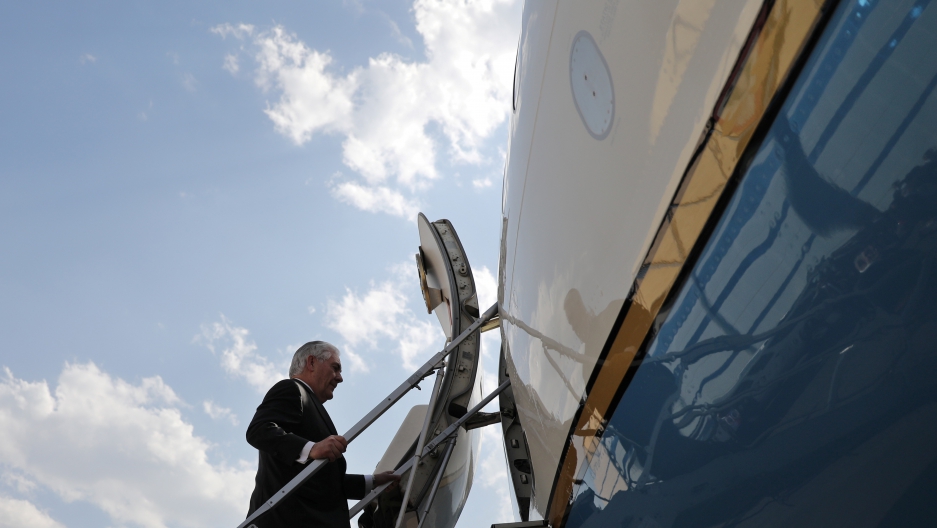 Low-profile US Secretary of State Rex Tillerson came under attack on Friday for failing to appear in public to launch his own department's annual human rights report.

President Donald Trump's chief diplomat, who has all but dropped from public view since taking office a month ago, penned a brief preface to the survey of the rights record of 199 countries.

But there was no event or news conference to mark the report's launch, and the State Department provided only an anonymous "senior administration official" to respond to reporters' questions.

The report itself paints a bleak picture of the situation in many countries, but there is no attempt to draw out a global theme or to say whether things are generally getting better or worse.

Traditional American foes like Iran are, as every year, accused of arbitrary detention, torture and killing of detainees — and friendly Saudi Arabia is tasked with "pervasive gender discrimination."

Rival great powers are not spared. China is accused of the "repression and coercion" of civil society groups, and Russia is said to have tortured Ukrainian citizens detained on its territory.

"The report speaks for itself. We're very, very proud of it," the senior official said, speaking on condition of anonymity. A former colleague was happy to go on the record to express his concern.

"Every Sec State since at least Warren Christopher personally released the human rights reports," declared Tom Malinowski, who was assistant secretary for human rights under the previous US administration.

In a Tweet, Malinowksi dubbed Tillerson "MIA" — missing in action — and warned that this was "bad for him and for the country."

International watchdog Human Rights Watch linked Tillerson's no-show to what it fears is a broader decision by Trump's administration to downplay America's leadership role on the issue.

Tillerson's absence, she added "reinforces the message to governments, rights activists and at-risk minorities that the State Department might also be silent on repression, abuse and exploitation."

Even before the report — a large database of country chapters on the State Department site — was released, a senior lawmaker from Trump's own Republican party had expressed concern about the launch.

"For first time in a long time @StateDept #humanrights report will not be presented by Secretary of State. I hope they reconsider," tweeted Senator Marco Rubio, a member of the foreign relations committee.

The annual "Country Reports on Human Rights Practices" does not have any legal status. The United States continues to supply weapons and foreign aid to many of the countries criticized every year.

But hundreds of US diplomats in missions around the world contribute to what they see as a major tool for informing and lobbying policy-makers and encouraging rights activists at home and abroad.

In his preface, Tillerson argues that this year's report demonstrates "the United States' unwavering commitment to advancing liberty, human dignity and global prosperity."

Asked why the secretary did not appear in public or before a camera to reaffirm this commitment, the official pointed to his testimony at his confirmation hearing in January.

At this hearing, the former oil executive said US leadership "requires moral clarity" and that "American values are our interests when it comes to human rights and humanitarian assistance."

But he added: "It is unreasonable to expect that every foreign policy endeavor will be driven by human rights considerations alone, especially when the security of the American people is at stake."

Trump himself said several times both before and after his election victory that he personally favors subjecting terrorist suspects to torture through waterboarding and "a hell of a lot worse."

But he also now says that he will defer to the judgement of his defense secretary, James Mattis, a retired Marine general who has argued that torture does not work.

Rights advocates have also been concerned by Trump's attempt to ban visas and refugee resettlements from seven mainly Muslim countries, and by his warm words for Russia's autocratic regime.

And Tillerson drew criticism at his confirmation hearing when he refused to say whether Philippine President Rodrigo Duterte's drugs war — which has claimed 6,500 lives — amounts to rights abuse.

Friday's report, however, is clear on this, saying: "Extrajudicial killings have been the chief human rights concern in the country for many years and they increased sharply over the past year."