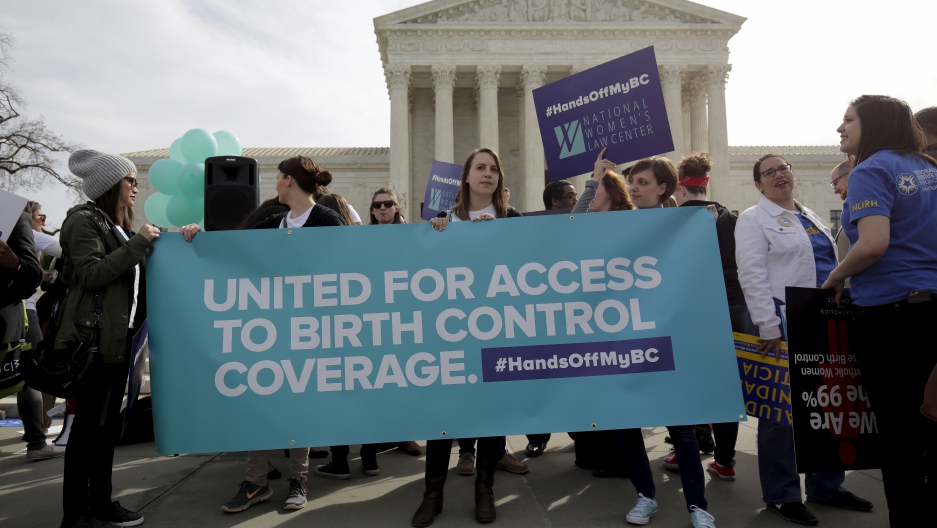 Supporters of contraception rally before Zubik v. Burwell, an appeal brought by Christian groups demanding full exemption from the requirement to provide insurance covering contraception under the Affordable Care Act, is heard by the US Supreme Court in Washington March 23, 2016.

Family planning is good for women. That's science. Access to contraceptives prevents unintended pregnancies, the need for often unsafe abortions, prevents AIDS, reduces infant and maternal mortality rates, cuts back on adolescent pregnancies, slows population growth and allows families to decide how many children they have and when.

Not to mention the fact that an estimated 303,000 women die from pregnancy complications each year — the majority in developing countries. According to Kaiser, one-third of these deaths could have been prevented each year if women who wanted access to contraception had it.

For the past 50 years, the US has been the largest donor to providers of family planning services around the world, largely through contributions to the United Nations Population Fund (UNFPA). In 2016, that funding came to $608 million.

But President Donald Trump has proposed major reductions in fudning for the UN. So will these contributions continue? Will President Trump make women's access to contraceptives at home and aborad a priority? We have some clues as to how this could shake out.

Last September, Trump was on "The Dr. Oz Show" and said that he believes women shouldn't have to get a prescription to get birth control. Pretty progressive. However, his reinstitution of the Mexico City Policy in January will undoubtedly make access to contraceptives for women around the world much harder. And his proposed rollback of the ACA will make access to birth control stateside much more difficult — and pricey.

It's not just Trump who will be making these decisions. Katy Talento, Trump's healthcare policy aide, has gone on record stating her belief that birth control causes miscarriages, infertility and abortions. Wrong.

Tom Price, Trump's Secretary of Health and Human Services, once famously insisted that "not one" woman has stuggled to afford birth control. Also false.

And according to the Denver Post, Trump's SCOTUS nominee Neil Gorsuch “is best known nationally for taking the side of religious organizations that opposed parts of the Affordable Care Act that compelled coverage of contraceptives.” He wrote an opinion siding with Hobby Lobby in what became the landmark Burwell vs. Hobby Lobby case.

So, with all of this in mind, we want to know: President Trump, do you believe increasing access to contraceptives for women worldwide is important for improving women's health, reducing poverty and increasing political stability? Click here to tweet our question to the president.