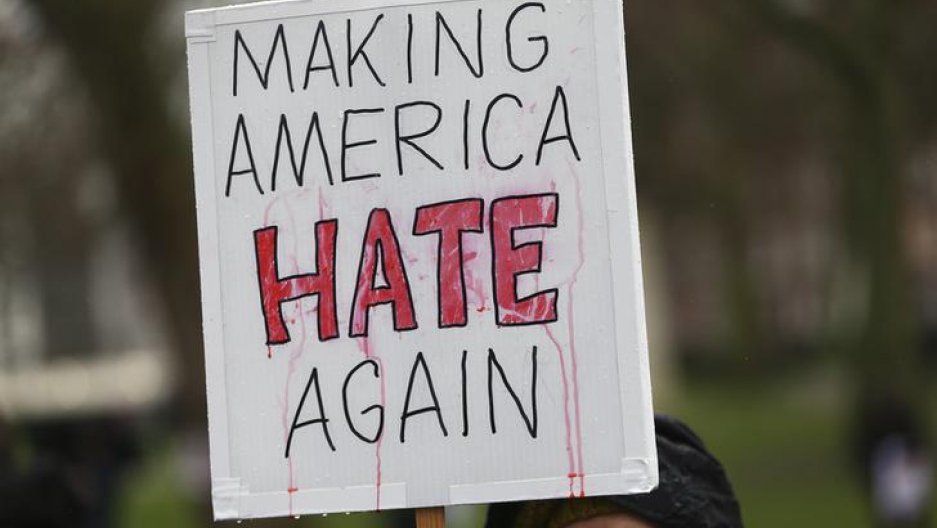 A protestor at a rally in opposition to President Trump's temporary ban on the arrival of immigrants and refugees from seven Muslim-majority countries holds a sign that reads "Making America Hate Again" in London, Britain on February 4, 2017.

Last week, Adam W. Purinton killed one man and injured two others at a bar in Olathe, Kansas.

Witnesses report that Purinton shouted “get out of my country” before he directed his gunfire at Srinivas Kuchibhotla and Alok Madasani, two engineers who immigrated to the United States from India.

Sean Spicer, the president’s press secretary, told reporters that it is “too early” to call the shooting a hate crime, and also said that it is “absurd” to suggest that the Olathe shooting had anything to do with President Donald Trump.

While it is virtually impossible to draw a direct line of causation between any particular incident and Trump’s rhetoric and policies, it's valid to ask whether the president’s proposals — including the wall on the nation’s southern border, procedures that will make it easier for officials to deport people, and the executive order restricting immigration from particular countries — have engendered prejudice.

Twitter user Amy Catania sees a connection — she contributed to our #100Days100Qs project by suggesting we ask @realDonaldTrump whether his policies on immigration have paved the way for a rise in hate crimes.

She’s not the only one.

2016 presidential candidate Hillary Clinton took to Twitter to warn about the consequences of Trump’s executive order limiting the arrival of immigrants and refugees in the United States.

Trump's own @DHSgov confirmed this weekend that the ban doesn't enhance security.
But it foments fear & resentment.https://t.co/jbzGFBsKnF

And last week, a group of activists met to discuss a rise in hate crimes in the Chicago area since Trump has taken office.

Although the FBI hasn’t yet released statistics on hate crimes in 2016, so many incidents have occurred since Trump’s election that online magazine Slate has setup a feed to keep track of them all.

After losing her husband in Olathe, Sunayana Dumala said that she “need[s] an answer from the government…what are they going to do to stop this hate crime?”

It’s a matter of no small urgency, Mr. President, so we’re asking you now: Do you believe your immigration policies have encouraged the recent rise in hate crimes? Click here to tweet the question to the president.