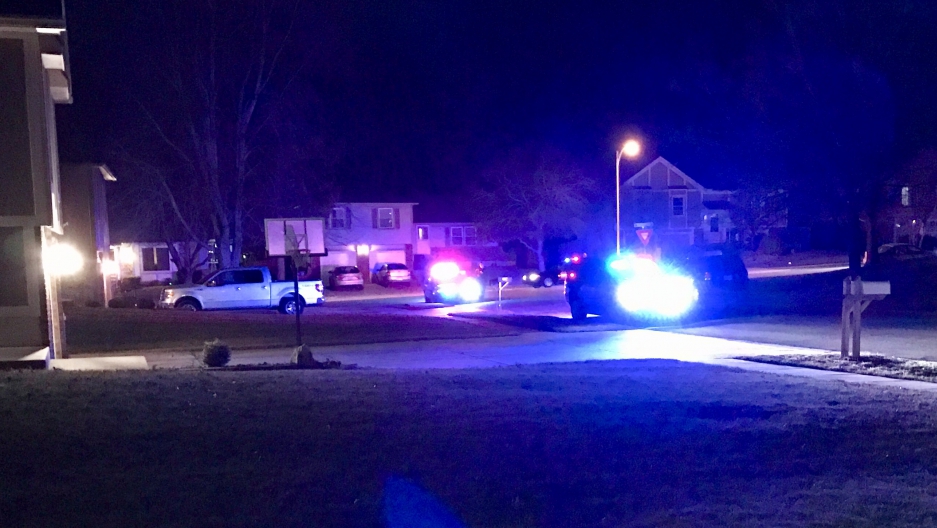 Tim Hibbard escaped a deadly shooting at a bar in Olathe, Kansas on February 22. He and other patrons fled down the street and ended up in a house on a block that was being searched by police.

I was in Olathe, Kansas, on Wednesday, February 22, to spend time with the guys I work with. Google Maps told me Austins was the closest bar and grill where I could watch my favorite basketball team play a very significant game.

Turns out, we only saw half the game.

At 7:15 p.m., just after ordering my nachos, I heard “POP! POP!”, then screams, yells and more pops. Like water breaching a dam, people flooded out of the adjacent room and into the narrow hallway where I was sitting at the bar. I ducked under my chair, struggling to get any sort of grip on whatever reality this was. I felt a pull on my arm, looked up and saw a back door open with people exiting the building. I jumped over a chair that had been knocked over, a person who had been knocked over, and sprinted through two sets of doors until I was breathing outside air.

Still not feeling safe in the parking lot, I kept running until I found a group of people. I recognized the Austins logo on the waitresses’ shirts and felt safe. The five of us ran out of the shopping center and down a street until we had distance between us and what was now a crime scene. Sirens were wailing as the reality of what had just occurred sunk in. It wasn’t a joke, it wasn’t a misunderstanding. Those were gunshots and my fear for my life was appropriate. We knocked on doors up and down the street until someone let us in their house.

Everybody was freaking out. The guys were pacing back and forth, adrenaline boiling over, looking for any additional danger. The women were sitting down, crying. They saw it happen. They knew the victims, they saw the shooter and they knew the backstory.

One of them was pregnant. She and her husband had just gotten married. This was supposed to their first baby. She was hyperventilating, trying to get her husband on the phone. The medics were unsuccessfully trying to calm her down. I’ll always remember the look on her husband’s face as he was running up to us and realized it was his pregnant wife in the ambulance behind him. He nearly ripped the doors off the hinges trying to get to her. Later, we found out that he had gone to the bar to find her. Instead, he found his friend who had been shot. He helped attend to his wound before joining his wife.

Another waitress in the group had initially kicked the would-be shooter out of the bar. She was racked with guilt. She said that she felt like she had pushed him over the edge. The backstory goes like this: The shooter had been harassing a couple of guys, calling them names and using racial terms to disparage their heritage. (He thought, it came out in his arraignment, they were Iranian.) The staff and other people sitting nearby had enough and they got a manager to remove this man. That was around 6:45 p.m., which, according to an app on my phone, is right when I walked in to Austins.

Thirty minutes later, he returned, this time escalating his verbal attacks. And with a gun.

So we sat, strangers brought together by an individual who felt he should be permitted to spew hate. Then, when that right was challenged, he felt the need to literally kill somebody.

Police came and police went. Helicopters circled above. The block, where we ended up, was barricaded by police cars and trucks. At one point, SWAT officers with very big guns told us to close the garage door and stay inside. They proceeded to march into the backyard and look for the shooter. Nobody knew what to say, nobody knew what to do.

The rest of my story isn’t important. I made it home safely. Yes, I’m shaken up. Yes, I’m overwhelmed emotionally. No, I cannot relax and I have a headache that will not go away because every muscle fiber is tense and ready to go. But that is not important. I will recover, because I’m not dead.

And if I really wanted to, I could mostly forget. Because as a white male, I have that privilege. Here is the important part of the story: one man is dead. Two more landed in the hospital with gunshot wounds. Because somebody shot them.

It is not normal. It is not okay.

Our sitting president ran a campaign steeped in fear. He tapped into the frustrations of a growing class of struggling Americans. But instead of addressing the real problems plaguing our nation, he spun the story to suit his narrative. He convinced the electorate that the real culprits are those who don't look like us. By demonizing minorities and stoking nationalism, he helped pave a path for the resurgence of white supremacy. He thanked a white supremacist for his support during the campaign. For 18 very long months, we were inundated with clips from Trump campaign rallies where attendees were encouraged to, "Knock the crap out of them" and were told, "We'll cover your legal fees.”

We've now found ourselves in a new version of America, where intolerance toward minorities and foreigners is encouraged from the top down. “Get out of my country!” — that is a real thing that a real person said to another real person on February 22 — before shooting him. This is what happens when we not only permit, but vote for the normalization of hateful speech.

This hate crime is the natural progression of that thought pattern. This hate crime is what happens when people think their intolerance is not only warranted, but heroic. People are literally dying because of our tolerance for bigotry and xenophobia. These are not sticks and stones, these are caskets and casualties.

Where is the outrage? What is the fulcrum that will tip our priorities toward love and protection of life? When will we realize that geographic boundaries are man-made, while the people who occupy those boundaries are God-made?

These are not partisan discussions. There is no snapping to grid on the value of life. We may not all agree on tax rates or minimum wage, but deep down we all feel that meaningless loss of life is a net negative on society. Even if you voted for Trump, you can speak out against hate speech that evolves into loss of life. Nobody is going to take your conservative card just because you defend the right to life for somebody whose name you might find difficult to pronounce. In fact, your voice speaks volumes! As the great bridge-builder Martin Luther King Jr. once said, "The time is always right to do the right thing."

The time to speak out against hate speech is now. These discussions can and should happen in public, but it is just as important to talk in private. Make sure your spouse and your kids and your coworkers and your neighbors know that you stand firmly against words of intolerance. In these times of division, be a bridge.

My story isn't important. On February 22, I survived. But if we keep voting from a place of fear, placing the blame for our struggles on the wrong people, then these events will keep happening. If we allow our administration to form a narrative of exclusion and then stay silent in the face of hate, events like this will continue to escalate.

Tim Hibbard is co-owner of EnGraph Software in Kansas City, where he lived for five years. A version of this essay originally appeared on Hibbard’s blog. He has requested that the usual modest fee we offer for personal essays be given to the SEED Scholar Program, which supports education for students with Indian ancestry in the US.