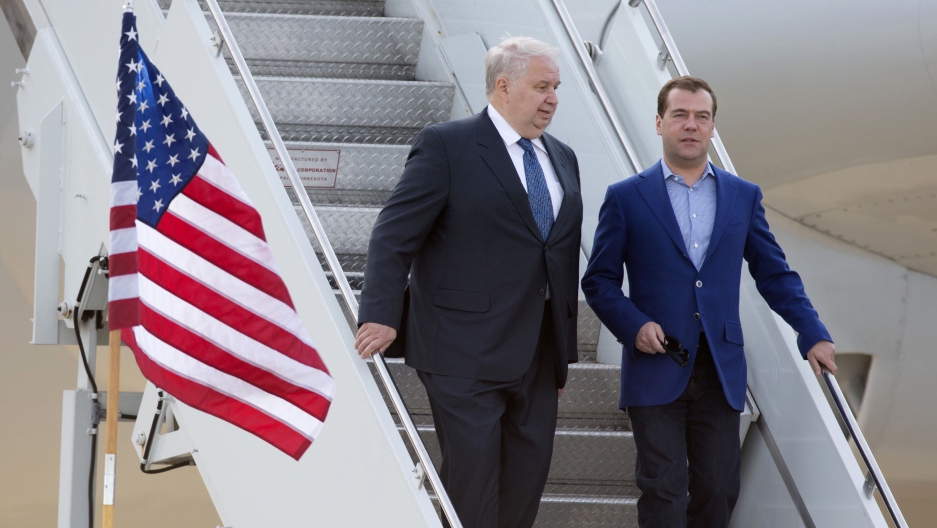 Dmitry Medvedev (R), prime minister of Russia, walks with Sergey Kislyak, Russian ambassador to the US, as he arrives for the G8 Summit at Dulles International Airport in Chantilly, Virginia, on May 18, 2012.

Russia's ambassador Sergey Kislyak was all smiles as he glad-handed US lawmakers gathered on Capitol Hill to hear President Donald Trump's maiden speech to Congress.

Two days later he was at the heart of a very Washington scandal after Trump's newly appointed Attorney General Jeff Sessions was accused of lying about meeting with the Kremlin's envoy.

Fellow diplomats told AFP that Kislyak, a veteran of many years of US-Russian diplomatic rivalry, would be amused by the spat, the latest to trouble Trump's efforts to form a government.

The 66-year-old engineering graduate has been at the heart of the Moscow foreign policy establishment since the days of the United States and the Soviet Union's Cold War standoff.

Married and with one adult daughter, he is coming towards the end of what has been an eight-year stint in Washington marked by spy scandals, a failed "reset" in ties and now political intrigue.

Already, one member of Trump's top team — short-lived national security adviser Mike Flynn — has been forced to resign after controversy over his contacts with Kislyak.

Now Sessions has been forced to recuse himself from any investigation related to the Trump campaign — whose ties with Russia are under scrutiny from all sides — after he admitted to two encounters with Kislyak in the run-up to the vote.

In Washington's febrile atmosphere, where disgruntled foreign policy and intelligence officials are stirring opposition to Trump, some reports have even described Kislyak as a spy master.

Russian officials scoffed at this, blaming a mood of anti-Russian paranoia, and Washington-based diplomats played down the claim.

All ambassadors, of course, have contacts with their countries' spies, but is Kislyak really — as some US reports now allege — a top recruiter for Russia's SVR foreign intelligence agency?

"Honestly speaking, I only have one question: Is this the lowest the Western media can reach or can they sink even lower?" demanded Maria Zakharova, the Russian foreign ministry's spokeswoman.

"I will tell you a military secret: Diplomats work, they work and their work involves making contacts in the country they are in."

There are, of course, Russian spies in Washington. In December, the outgoing US president Barack Obama ordered 35 of Kislyak's colleagues at the Russian mission expelled as foreign agents.

And Kislyak was ambassador in 2010 when US counterintelligence rounded up 10 Russian sleeper agents, including estate agent Anna Chapman, who became a glamorous media sensation.

But if Kislyak spent any of his career at the SVR or the KGB it does not show up on his official biography, which portrays a successful but hitherto low-key progress through foreign ministry ranks.

He was based in the United States throughout the Cold War 1980s, first as an official at the Russian mission to the United Nations in New York, then as first secretary of the embassy in Washington.

He had a series of senior bureaucratic and technical roles in Moscow through the 1990s before becoming Russia's ambassador to both Belgium and NATO in 2003 and then a deputy foreign minister in 2008.

As ambassador he has been discreet, but he gave a rare news conference last year and lamented: "We were able to end the Cold War, but most probably we weren't able to build post-Cold War peace."

As a member of Washington's diplomatic circuit, he is not the most high-profile socialite, but he likes to boast that his residence has one of the best chefs in the District and he entertains at home.

In the run-up to November's election, diplomats from both friends and foes of the United States were keen to build ties with figures — like Sessions or Flynn — who were close to Trump.

But Kislyak's role is under scrutiny because US intelligence agencies believe Russian government propagandists and hackers tried to hurt Hillary Clinton and to help Trump's rise.

And, as Michael McFaul, US ambassador to Russia between 2012 and 2014, tweeted: "Let's not be naive folks. Kislyak obviously was meeting Sessions because of his role in Trump world. That's his job."