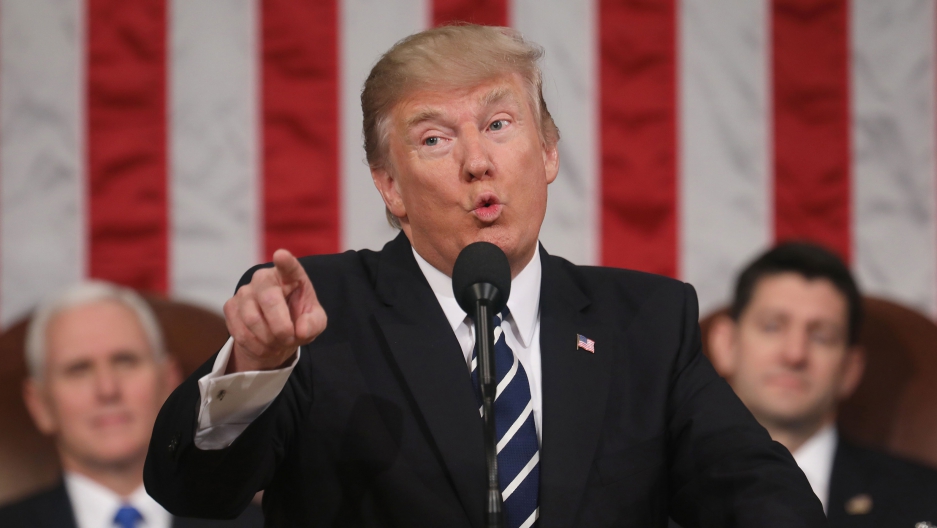 President Donald Trump delivers his first address to a joint session of Congress from the floor of the House of Representatives.

President Donald Trump’s first address to Congress on Tuesday employed a different style of speech than we've come to expect.

According to data compiled throughout his campaign and into his presidency by researchers at the University of Texas at Austin, Trump's off-the-cuff speeches are usually an outlier among presidents. He uses simple language, often delivered in a style that lacks analytic or logical reasoning. His speeches are high in displays of authenticity, and overall — despite a tumultuous first month in office — positive in tone.

But Tuesday’s speech was more in-line with previous presidents than any of Trump’s other formal addresses. Trump, for the most part, stuck to the script. He called for unity and gave an ambitious list of priorities to Congress, though it was thin on detail. He opened his speech by condemning last week’s racially motivated shooting in Kansas City and recent threats to Jewish communities.

“Recent threats targeting Jewish Community Centers and vandalism of Jewish cemeteries, as well as last week's shooting in Kansas City, remind us that while we may be a nation divided on policies, we are a country that stands united in condemning hate and evil in all its very ugly forms,” he said.

Other parts of his speech rang with optimism:

“Dying industries will come roaring back to life,” he said. “Heroic veterans will get the care they so desperately need. Our military will be given the resources its brave warriors so richly deserve. Crumbling infrastructure will be replaced with new roads, bridges, tunnels, airports and railways gleaming across our very, very beautiful land.”

“This was a very normal speech,” said Kayla Jordan, a graduate student at the University of Texas at Austin who has been analyzing Trump’s speech patterns since he was a candidate.

“It’s a linguistic way to get at psychological processes,” Jordan explained. “The words we use are indicative of our personalities.”

While the library analyzes dozens of metrics, Trump’s unique speaking style can be best measured with three: the degree of analytical thinking used, how authentic it seems, and the overall emotional tone.

Trump typically scores lower than most politicians on analytic thinking. Jordan said the best way to visualize this is to remember the debates between Trump and Hillary Clinton.

“When you consider Hillary Clinton giving answers, ‘this is the problem, this is the thing we need to do, this is the solution,’” Jordan said. “Trump is almost stream-of-consciousness talking: ‘this is a problem, here's the experience I’ve had, here's this other story maybe.’ It's not a well laid out answer.”

But it’s that speaking style that gives him high marks in authentic speech — speech that is visceral, immediate, direct.

Tone measures how positive the language is, another metric where Trump usually scores well because of his use of words like “win,” and his campaign slogan.

Each of these aspects are scored on a scale of 0 to 100, based on algorithms developed through years of language research and experimental trials, Jordan said. Sets of key vocabulary words that relate to each trait are created based on prior research, and then tested through experiment.

In general, levels of analytic thinking in presidential language has decreased over the years. Even so, Trump is an outlier among modern presidents.

But in his Tuesday speech to Congress, Trump's language was substantially more analytic and less authentic than any of his other formal speeches.

“I think one [component] is the context,” Jordan said. “All of the State of the Unions are really high, so I think it's just that they are giving a formal report to Congress and it's increasing those [metrics]. And I'm not sure he wrote it.”

“I do think Stephen Miller greatly assisted with both [the RNC speech and Congressional address] — if he didn't write them outright,” Jordan said. “I pulled a recent interview that Miller did a couple weeks ago and the big difference is his speech is typically more analytic, so he could be the reason that score is so high. His use of pronouns matches the speech. The tone of that interview matches the tone of the speech and I think it would explain the low authenticity.”

Authenticity is not necessarily a measure of truthfulness from the speaker, only the way that their language is perceived. And it can shift, based on the confidence and emotional state of the speaker, Jordan said.

Trump is also surprisingly positive in tone. Tuesday night’s speech was analyzed to have an emotional tone of 66 out of 100, which was lower than in Trump’s inaugural address (87.8), but still wildly more positive than his dark convention acceptance speech (30.8).

“It seems [the] more constrained the situation, the more Trump is kind of similar to recent presidents,” Jordan added.

Tuesday’s address was a speech before the joint session of Congress, but it is technically not a State of the Union address. Reagan revived the tradition of giving an address after the inaugural, and every president since has done the same. This first address has many of the same qualities a State of the Union would, however.

“The fact is, most speechwriters hate the thing,” explains Russell Riley of the Miller Center’s Presidential Oral History program at the University of Virginia. “The State of the Union has become a laundry list of all the things the president wants to do. The reasons the speech writers hate that is because it's impossible to develop any kind of thematic unity. They would prefer a shorter one that would have thematic elements and contribute to image building.”

Riley, who has interviewed hundreds of former White House staffers who served from Nixon to today, said speechwriters find crafting the State of the Union almost formulaic. In an interview before Trump’s speech to Congress, he speculated that the formulaic style might force Trump to be more conventional.

Trump’s inaugural, Riley said, was different from most.

“It was more combative, did not have the sort of conciliatory language that one normally expects from an inaugural address,” Riley said. “It was another one of these exercises in norm-busting that we came to expect from Donald Trump in the course of the campaign.”

Riley said Trump, who has the lowest approval rating of any president after a month in office, according to Gallup’s weekly poll, will likely see a bump from the address, though it may not last long.

“It's a controlled environment and it puts the president at the center of government in a very ceremonial way,” Riley said. “It does exactly what Woodrow Wilson wanted: to elevate the presidency out of these other equal institutions and place him at the very center of the politics. It's a nice experience to be very much the center of attention in that environment.”