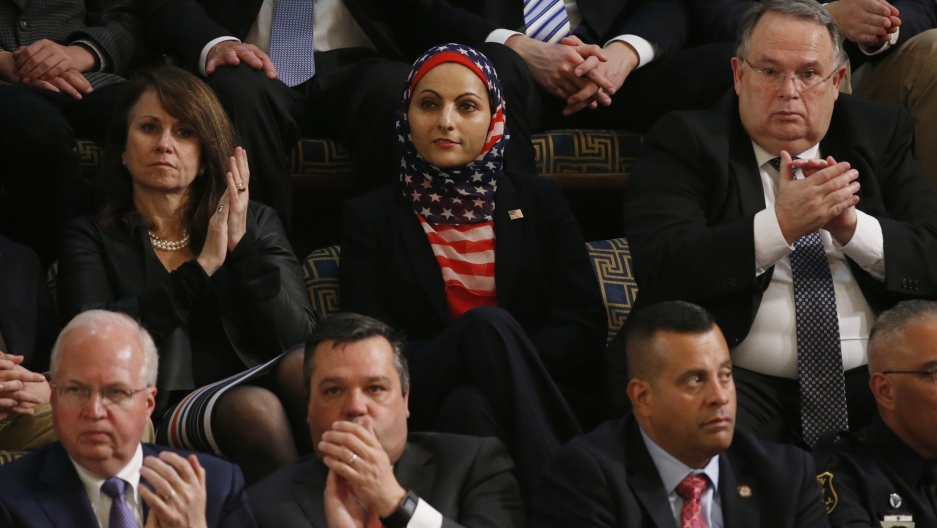 Aneelah Afzali, executive director of the American Muslim Empowerment Network in Seattle, attended President Donald Trump's address to Congress on Feb. 28, 2017. Afzali told local television station KING 5, "I want them to look in the eyes and in the face and recognize the people they impact with their words, with their policies, with their proposals, with their rhetoric.”

For anyone who watched President Donald Trump’s address to Congress on Tuesday, the irony of who was in the audience on either side of the aisle was clear.

Trump introduced the relatives of people who had been killed by undocumented immigrants. In attendance was the father of Jamiel Shaw Jr., who was murdered in 2008 by a gang member, who was sentenced to death. The wife and daughter of Deputy Sheriff Danny Oliver and wife of Detective Michael Davis also attended. The officers were killed in 2014, and the accused murderer could face the death penalty.

But many legislators also invited those who have been affected by Trump’s immigration orders. Among them were the children of Guadalupe Garcia de Rayos, a Phoenix resident who was deported after appearing for a routine check-in with immigration officials. Hameed Darweesh, an Iraqi who was one of the first people detained in January under Trump's immigrant and refugee restrictions, was also in the audience.

Also present were recipients of the Deferred Action for Childhood Arrivals program, or DACA, an Obama-era initiative that offers temporary protection from deportation to undocumented immigrants brought to the US as children. So far, the Trump administration says it will not revoke DACA, but it has not detailed the program’s future. Trump's speech did not offer more clarity. In fact, to some in the audience, his speech hardened his campaign message of splitting undocumented immigrants into two categories: good and bad.

“That message was clear throughout. Some immigrants are OK because they’re nice and go to school, but other immigrants are criminals,” says Martha Zavala Perez, 25, who attended the speech as the guest of California Democratic Rep. Julia Brownley. Zavala Perez has DACA, was born in Mexico and found out she was undocumented when she was a high school student. “It’s not a binary. We need to be able to look at the whole issue holistically and take in all aspects of the immigration issue instead of pitting a community against each other.”

One narrative Trump has been clear about is that he wants to see more resources dedicated to the removal and visibility of immigrants who have committed crimes.

"I have ordered the Department of Homeland Security [DHS] to create an office to serve American victims,” he said in his address. “We are providing a voice to those who have been ignored by our media and silenced by special interests," he said. (The cases of his guests have been covered by many media outlets, including the Los Angeles Times and The Sacramento Bee, which are located where the crimes occurred.)

In one of the executive orders Trump signed in January, he directed DHS to create an office to provide “proactive, timely, adequate, and professional services” to victims and the families of victims of crimes committed by immigrants who could have been deported. The language of the order does not restrict the office to undocumented immigrants; an “alien” is any kind of noncitizen. Trump also called for quarterly reports on these services, as well as regular lists of crimes committed by people whom immigration agents requested be detained by local law enforcement.

"The office is called VOICE — Victims Of Immigration Crime Engagement,” he said in his address, to the sound of groans from lawmakers on the left.

There are many studies that have concluded that immigrants, with or without documents, commit fewer crimes than US-born Americans. For critics of the Trump agenda, that means that he is exaggerating the problem of criminality and unfairly characterizing immigrants. For his supporters, one crime committed by someone who could have been deported is one too many.

"would that be fair to our president?"https://t.co/aYWEzgAyvq via @woodruffbets pic.twitter.com/9vyoNJm6Dy

Writer Anand Giridharadas says Trump’s painting of certain groups as problems has real consequences. Characterizing Mexicans as gang members and rapists, criticizing the entire religion of Islam (“Frankly, we’re having problems with the Muslims,” he told Fox Business Network last year), and then creating policies that cast wide nets to penalize people who have committed no crimes causes harm beyond government’s action, he says.

Giridharadas points to the executive order that barred refugees and immigrants from certain countries from entering the US. That order has since been halted by court rulings, but the Trump administration says they will issue a new version of the executive order.

Giridharadas wrote an essay in The Atlantic which makes the case for why Trump’s words have an effect on people like Adam W. Purinton, who shot at Srinivas Kuchibhotla and Alok Madasani, killing Kuchibhotla and injuring Madasani and Ian Grillot who stepped in to help at a bar in Olathe, Kansas. At his arraignment, it was revealed that Purinton thought he killed Iranians. Iran was one of the seven countries listed in Trump’s ban. Kuchibhotla was and Madasani is an immigrant from India.

Tuesday night’s address, six days after Purinton terrorized Olathe, was the first time Trump referenced the murder. “Recent threats targeting Jewish community centers and vandalism of Jewish cemeteries, as well as last week's shooting in Kansas City, remind us that while we may be a nation divided on policies, we are a country that stands united in condemning hate and evil in all its forms,” he said.

“Donald Trump condemning an act of hate is sort of like me condemning french fries that I both ordered and then ate all of. He has been a stoker of the very passions and hatreds that are now running at a kind of fever pitch,” Giridharadas says. “And he has been not only their enabler but their beneficiary because they are central to his political project.”

Giridharadas tried to get the White House to comment on the murder before his essay was published. He asked if there was any aspect of the murder, or the motivation of Purinton, that the president wished to disavow. He heard nothing for 10 1/2 hours.

The piece ran online, and he then got an email from a White House spokesperson: “The President condemns all acts of violence against American people.”

“At first I think, OK, they’re making progress. Finally, they’re trying to say something,” says Giridharadas. “Then I look at that sentence again, and I realize how remarkable it is. Because I had asked whether they condemned a crime against two foreigners because of their perceived foreignness.”

Update: the White House just got back to me with a statement. It is stunning in its #AllLivesMatter refusal to *see* us. I'm blown away. pic.twitter.com/m7hu3XsAWN

And this is something undocumented people like Zavala Perez vow to fight publicly, although that is not always easy. Perez, now a professor at California State University Channel Islands, says she talked with her family first before accepting the invitation to attend Trump's speech. “My parents, my sister and I had to talk about what it would mean for me to go there and how much of our story would we make public.”

She decided to go, she says, because she feels a sense of duty “to represent those who aren’t as fortunate and who perhaps don’t have as many protections as I do.”

Today, in Washington DC, other undocumented immigrants like Perez did the same, telling their personal stories at a press conference, organized by the pro-immigrant rights nonprofit Define American. The group wanted its version of the story of immigrants to be heard as much as Trump’s.

One young woman who spoke out at a similar press conference in Mississippi, who has previously been granted DACA status, was arrested by ICE agents on Wednesday. It was unclear why she was arrested, but her attorneys argued it was because she has spoken out, according to The Associated Press.