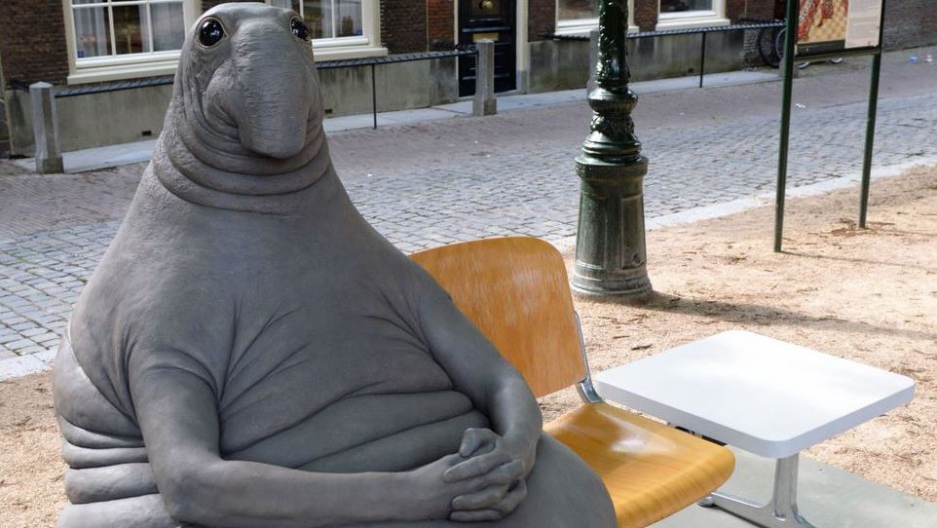 Well, for starters, “it” actually started out as a sculpture created by the Dutch artist Margriet van Breevoort. The drooping creature with glazed eyes was installed in front of a children’s hospital in the Dutch city of Leiden. The point, according to the artist, is that it sits there. Waiting. It’s intended to cheer up tired patients stuck waiting their turn for care, in spite of the fact that it looks like a weird cross between an elephant seal and the Pillsbury Doughboy.

But then this lumpy creature started showing up in meme form, on Russian social media. And there it took on a life of its own. “In Russian, he’s known as Zhdun and in Ukraine, he’s known as Puchekun,” says Damien Sharkov, a Newsweek reporter who focuses on Russia and Eastern Europe.

One Russian newspaper even declared Zhdun Russia's new national symbol. But, why?

Zhdun's glassy, pupil-less eyes are kind of freaky. And notice that the creature has no feet. (Does this really comfort children?) But people seem to find him sympathetic. “As it’s intended to embody the spirit of waiting, it’s kind of cynical that it has to wait because it can’t really walk away, so when you see it on a seat, it’s pretty apparent — that’s a creature that’s there to stay,” Sharkov explains.

Sharkov says he first spotted Zhdun on the Russian social media website Pikabu, which attracts half a million visitors a day. “People really picked up on this creature that’s prepared to wait a long time,” says Sharkov, “it being well-meaning, looking a bit simple, a bit optimistic in the face of maybe hopelessness.”

Russian users have started pasting images of Zhdun next to the Russian president, for example, with captions like, "Waiting for the next election." Or within photos of large, delayed construction projects such as the new soccer stadium in Saint Petersburg, which seems to be taking forever to be completed.

“Some Russians might even see Zhdun as a universal symbol akin to Samuel Beckett’s ‘Waiting for Godot,’” says Sharkov.

Zhdun has now appeared on social media in Kazakhstan and Ukraine, too, where he’s called Pochekun. One politician in the Ukrainian capital of Kiev placed a physical Pochekun toy in an empty seat in the parliament. It appears Pochekun is waiting for the other absentee politicians to show up, waiting to pass laws, waiting to actually carry on with the often sluggish proceedings of government.

"Pochekun, like the majority of Ukrainians, is waiting for national representatives to arrive and work," Ukrainian legislator Borislav Bereza said in a Facebook post. "And he's keenly awaiting proper changes in the cabinet of ministers."

You could say that this benign blob, whether it’s in Ukraine, Russia or the Netherlands, appears caught in an existential state of boredom.

“That is an interesting way of putting it,” says Sharkov. “Definitely this boredom aspect of Zhdun has been played up in Russia. … One political scientist has suggested that the Russian Zhdun has become the new political symbol of the country because he’s well-meaning, sluggish maybe, always anticipating reforms and improvements to come to Russia, but he's not really prepared to go out and instigate some revolutionary changes, if those reforms aren’t made.”

Don't let your memes be dreams: Russian Post uses a knock-off of the now famous Zhdun to promote its "Post without wait" program. pic.twitter.com/8PjEIEWtr9