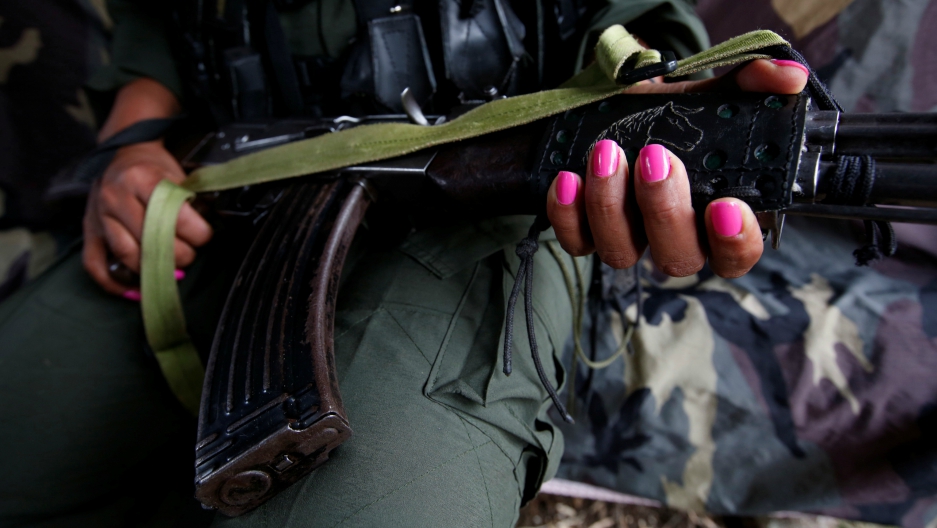 A member of the 51st Front of the Revolutionary Armed Forces of Colombia (FARC) poses for a picture at a camp in Cordillera Oriental, Colombia, Aug. 16, 2016.

Colombia's FARC rebels begin disarming Wednesday under a historic peace deal, beginning the delicate transition from guerrilla army to political party after more than half a century at war.

After weeks of mustering its troops at designated disarmament zones, the FARC, or Revolutionary Armed Forces of Colombia, was set to begin an inventory of its weapons and destroying munitions under United Nations supervision.

Three armed guerrillas in combat fatigues guarded the entrance to the rudimentary camp, where a steady stream of trucks delivered bags of cement and workers scrambled to finish building a kitchen, mess hall, bathrooms and a laundry area.

Gonzalez, 54, has been a guerrilla since the age of 14. She said she was hopeful for the future and planned to reunite with her five brothers and four sisters.

"Let's hope this leads to peace," she told AFP.

President Juan Manuel Santos, who won the Nobel Peace Prize in October for his efforts to end the country's 53-year conflict, called the disarmament "historic news for Colombians" in a tweet.

FARC leader Rodrigo "Timochenko" Londono tweeted that the leftist rebels were laying down their guns "with enthusiasm."

Related: She misses being a guerrilla, but this former FARC fighter is starting a new life back home

The disarmament of the country's largest guerrilla army will leave rival movement ELN — currently engaged in rocky peace talks with the government — as the only rebel group still waging a multi-sided war that has killed 260,000 people.

The Cold War-era conflict, which has also left 60,000 people missing and uprooted 6.9 million, is the last major armed conflict in the Americas.

Colombia, South America's third largest economy and the world's biggest cocaine producer, has been torn since the 1960s by fighting that has drawn in multiple leftist rebel groups, right-wing paramilitary units, drug cartels and the army.

Santos is hoping to seal a "complete peace" with both the FARC and the ELN.

Both leftist rebel groups took up arms against the government in 1964, in the aftermath of a crushed peasant uprising.

Next challenge: the ELN

It signed a peace deal with the government in November after four years of negotiations in Cuba, but implementation is running slightly behind schedule.

Under the deal, the FARC was originally due to surrender 30 percent of its weapons to the UN by Wednesday. But that can only happen once the inventory is complete.

The government's high commissioner for peace, Sergio Jaramillo, said Tuesday that the 180-day deadline for the rebels to fully disarm would be maintained, however.

The UN said in a statement that the FARC has until May 29 to disarm.

The first to surrender their weapons will be the 322 FARC members taking part in a joint monitoring commission with the government and the UN.

Separate talks with the ELN, or National Liberation Army, took a hit this week when the rebels claimed responsibility for a series of recent attacks — a bloody reminder of the violence Colombia still faces.

Experts warn the ELN could be a tougher negotiating partner than the FARC because it has more hardline demands for sweeping social change.

It also has a decentralized command structure that could make it harder to convince the rank and file to accept an eventual deal.