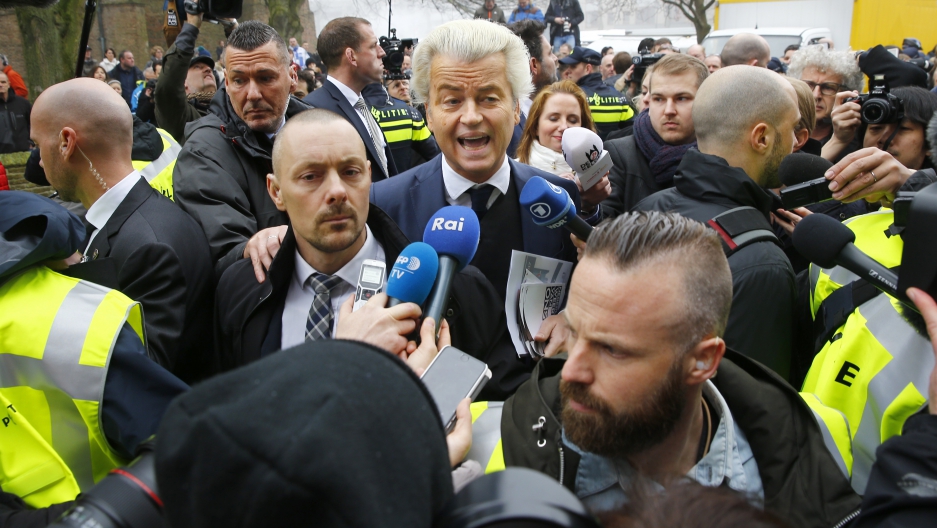 Dutch far-right Party for Freedom (PVV) leader Geert Wilders campaigns for the 2017 Dutch election in Spijkenisse, a suburb of Rotterdam, on Feb. 18.

It's Saturday — market day — in the small, blue-collar Dutch town of Spijkenisse just outside Rotterdam.

The snow is coming down thick and fast, but that hasn't stopped people from gathering in the main square to buy local vegetables, cheese, meat and fish for the week ahead.

One of the shoppers is Leonard, a Surinamese man in his 60s who has lived in the town ever since he left the former Dutch colony 25 years ago. He didn’t want to give his last name. Leonard prays weekly in the Protestant church here, and like many of the locals, he thinks Dutch politician Geert Wilders, known for his anti-Islam, anti-immigrant positions, is onto something.

"He has some good points about immigration and terrorism," Leonard says with a shrug. "Sometimes you have to face reality."

Wilders' version of facing reality is a harsh one. Often described as the "Dutch Donald Trump," he courts controversy constantly, calling for all mosques to be closed, the country's borders to be sealed and the Netherlands to pull out of the European Union. Last year, Wilders was convicted of inciting discrimination in a speech where he called for fewer Moroccans in the country.

Such policies may seem at odds with the liberal stereotype of the Dutch, but Wilders' PVV party is set to do better than any other come election day, March 15. Part of the reason is his long-standing argument that Islam is incompatible with Dutch culture, something that resonates with people like Leonard.

Like Trump — who Leonard also admires — Wilders boasts about saying what's on his mind, openly rejecting the idea of being politically correct. At a recent rally, for example, he called some Moroccans in the country “scum.” For many in the Netherlands, those kinds of comments are racist, plain and simple, but Wilders’ supporters don't see it that way.

"He's not racist," says Dave, a 40-year-old former welder (who also declined to give his last name). "He says what he thinks. And sometimes he says some little things that he [shouldn't] say, but it's things that a lot of people in our country think about but don't want to say."

Dave has been out of a job, he says, since his boss in Rotterdam replaced him with lower-paid workers from Poland several years ago. These days, Dave sells fries out of a truck in the market every Saturday, but he struggles to get by.

PVV voter Dave lost his job as a welder a few years back. Now he sells fries from this food truck.

He votes for PVV every year and says a large part of the appeal is their promise to put Dutch people first. If Wilders gets into power, for example, he's said he will cut development aid to poor countries (which accounted for about 0.75 percent of the country's gross national income in 2015) and use the money at home instead.

"I have three children ... [who] don't have enough things for school and that sort of thing, because everything is getting expensive," Dave says fiercely. "And then you see that they [the Dutch government] give a lot of money to other countries and that sort of thing to help other people.

"I know they need help also, but first look at your own people and then look at the rest of the world."

Some of PVV's support comes from unlikely quarters, including first- and second-generation immigrants from Muslim countries — the very people Wilders wants to keep out or force to assimilate.

Aylin and her mother sell fruit and vegetables in the market in Spijkenisse. Aylin's parents are from Iran, and they all plan to vote for Geert Wilders.

Aylin, who asked to be identified by her first name only, as well, is a 20-year-old university student who works at the market every week with her parents. They’re from Iran. Despite the fact that her parents were not born in the Netherlands, she says she agrees with Wilders' call to close up the border to anyone from Muslim countries — although not completely — and is planning to cast her first-ever vote for him.

"I think the statements he makes and the things he wants for this country will benefit us in the long run," Aylin says, before adding with a laugh, "My parents are also voting for him so I gotta keep them as friends; otherwise I can't sleep at home anymore."

She thinks immigration is the main issue driving support for Wilders in Spijkenisse. One in five locals voted for him in the last election in 2012, much higher than the national average of one in 10, and Wilders regularly holds rallies in the town.

Aylin says she can see that her customers at the market seem uncomfortable with the idea of foreigners in the town, in general, although she doesn't count herself and her family among them. For her, the foreigners are the ones who come to the country to take advantage of the benefit system rather than earn their own money and contribute to society, and those are the people who need to be kept out.

"As you can see, we are working hard for our money," she says proudly. "My parents have been here for the last 25 years, so we have basically become Dutch people."