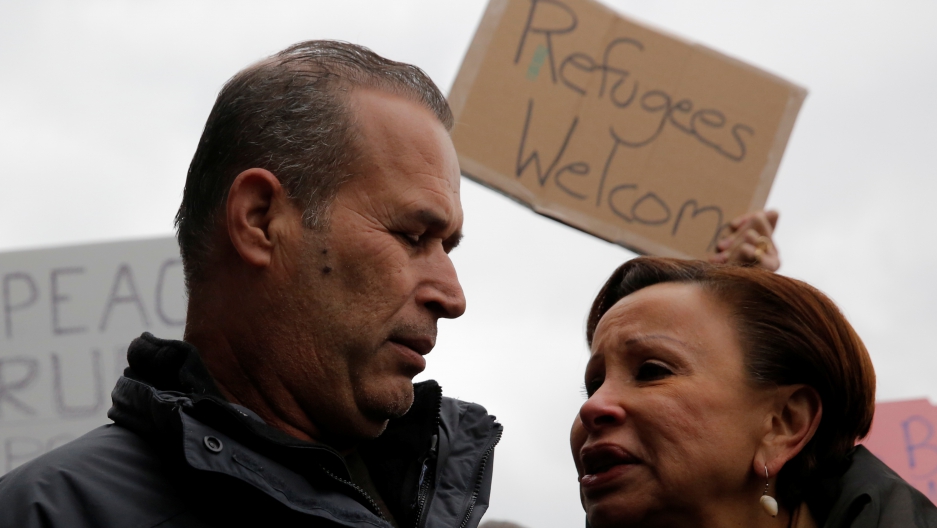 Several special guests will be in the audience Tuesday night when President Donald Trump addresses Congress. Three of them are relatives of people who've been killed by undocumented immigrants. The family members were invited by the White House to underscore the reasoning for the president's immigration crackdown.

But some Democrats in the audience are bringing their own guests.

New York congresswoman Nydia Velázquez, for example, invited Hameed Darweesh, an Iraqi man who was one of the first people detained in January under Trump's immigrant and refugee restrictions.

"America is great because of people like Hameed. He took great risk and made great sacrifices to help our nation and to work with the US government," Velázquez says.

Darweesh worked as an interpreter for the US military for 10 years. He and his family were able to relocate to the US on a special immigrant visa extended to Iraqis who worked with the US. The family had just arrived at John F. Kennedy International Airport when the executive order went into effect.

Darweesh is one of the plaintiffs in a federal lawsuit in New York, challenging Trump's immigrant and refugee ban. The judge's ruling in that case was the first to temporarily halt part of the executive order in January. It also set into motion legal challenges in other states, eventually leading to a wider suspension of the measure while litigation proceeds.

Velázquez and fellow New York congressman Jerrold Nadler were at the airport to demand the release of Darweesh and others who were detained.

She says Darweesh is her guest because she wants to show the nation a human face of someone affected by the executive order. "We're using this opportunity to say, 'Mr. President, here you have an opportunity to unite the country and put an end to the divisive, angry rhetoric that we have heard from him since his inauguration.

"I would like to hear from him, hear a vision for America that unites all Americans," she says. "A vision that protects our country that depends on the collaboration of all countries, even Muslim countries." President Trump, she adds, "has an opportunity to change course ... and extend a hand to members of Congress of both parties. We will not resolve the issue of immigration unless we work in a bipartisan way. That would be kicking the can down the slope without any concrete resolution."

Trump told news anchors at the White House today that he would be open to an immigration bill that would grant legal status to undocumented immigrants who have not committed serious crimes. His executive orders, however, give federal authorities broad power to deport and block immigrants from entering the US for committing crimes, or even being suspected of crimes. Also in attendence at his address this evening are the children of Guadalupe Garcia de Rayos, a Phoenix resident who was deported after appearing for a regular check-in with immigration officials.

Darweesh says he just wants to hear that people have an opportunity and are welcome. And that they are appreciated for what they are doing to help Americans oversees.