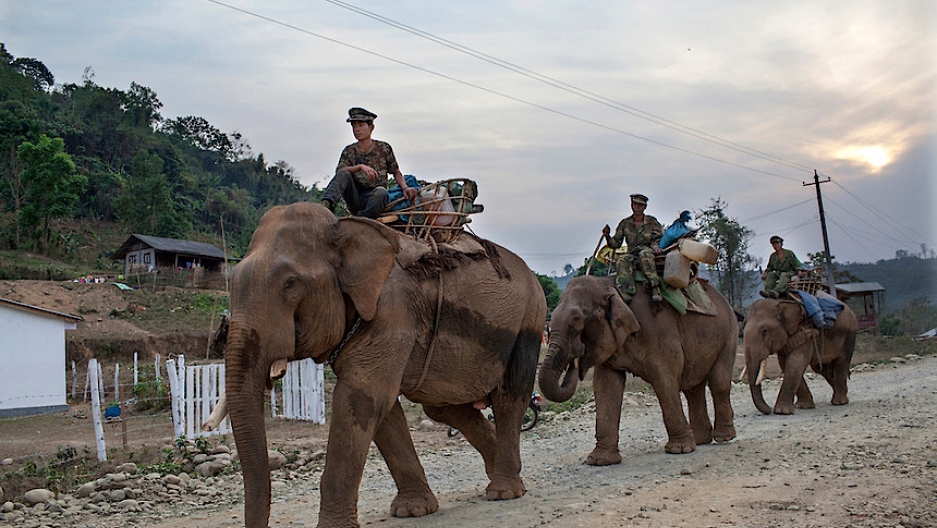 There was a time when the most fearsome sound in warfare was not the crack of a rifle or the eerie hum of a drone.

It was the shriek of an elephant, tusks slick with blood, skulls crunching underfoot.

War elephants tend to conjure up Iron Age battles, those archaic campaigns in which hordes dismembered other hordes with arrows and blades. They were exotic cavalry for long-dead empires: Carthage and Macedon, the Mughals and the Khmer.

But there is one corner of the planet — and only one — where war elephants persist into the 21st century.

That place is Myanmar. Not central Myanmar, where selfie-snapping tour groups get herded through golden temples.

War elephants trod through a more forbidding patch of the country: the northern Kachin State, where modernity is held back by war. There, in remote hilltops abutting China, mankind’s 4,000-year-old war elephant tradition is kept alive.

The upholders of this custom obey no government. They are rebels known as the KIA, short for Kachin Independence Army.

The KIA are among Asia’s largest guerrilla factions. Their namesake ethnic group, the Kachin, was Christianized by American missionaries in the 1800s. They inhabit an area roughly the size of Portugal that is rich with jade, gold and timber. 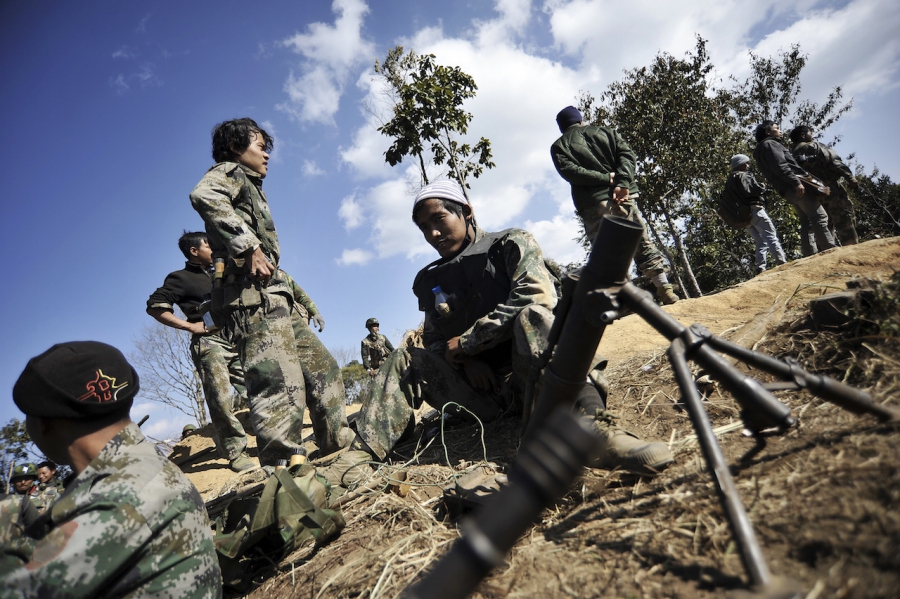 Kachin Independence Army soldiers man their position at the front line near Mai Ja Yang in Kachin State on Jan. 22, 2013. Fierce fighting continues to rage between the KIA and Myanmar's military.

The KIA defends its native turf against domination by Myanmar’s military. They rely on mortar shells, rusty assault rifles, 10,000 fighters (including women) and a little-known corps of about four dozen elephants.

“You’ll mostly find them in remote areas. Places where cars and trucks cannot go,” says Col. James Lum Dau, a foreign affairs specialist who has served in the KIA for decades. “In the deep jungle, an elephant is the only way to bring in supplies. There is no other way.”

War elephants come in two forms. The most frightening version is the combat elephant.

This is the creature “used in classical and medieval times to charge an enemy’s front lines,” says Jacob Shell, an assistant geography professor with Temple University who has extensively studied war elephants.

Ancient rulers — from Alexander the Great to Egyptian pharaohs — used elephants as organic tanks. Their inch-thick skin is extremely hard to penetrate. Swordsman who tried often got trampled flat. Or worse yet, skewered by tusks, sometimes outfitted with metal spikes.

A trumpeting pachyderm may sound majestic at the zoo. But when there are no fences to hold it back, and that elephant wants to kill you, its bellows are positively nauseating.

This is the sort of gore and horror conjured by the phrase “war elephant.” But it would be a highly misleading way to imagine the KIA’s tusked cavalry.

The words “war elephant” shouldn’t imply that “the KIA is making these elephants fight and murder,” Shell says. “This is not true. The KIA’s elephants lead pretty good lives overall.”

The KIA’s elephants are purely logistical. They don’t stomp on enemies’ ribs. They move stealthily — well, stealthily by elephant standards — along secret jungle routes with cargo on their backs.

“They can carry pretty much anything,” says Col. James Lum Dau. “Rice, rations, medicine, weapons. Anything you would normally carry by car.”

Kachin State, mired in war for much of the past century, is hard to traverse by car. For starters, there are few roads. Nor is there much electricity or many hospitals and schools.

This development void is a casualty of war. For decades, Myanmar’s army has shelled Kachin villages and blasted rebel positions with attack choppers. In recent months, the strikes have been unrelenting.

But even if the war stopped tomorrow — and it won’t — this place would be difficult to modernize. It is both mountainous and pounded by hard rain for much of the year.

It’s the sort of landscape that imperial governments often try and fail to fully subdue. As in Appalachia or Tibet, high-altitude, impassible terrain fosters cultures that cherish independence. The Kachin are no exception.

While Myanmar’s troops roll around in noisy vehicles, the rebels slink through untamed forests. So do their massive pack animals.

Asian elephants “are evolved to be mobile in precisely these sorts of conditions,” Shell says. “They’re happy in the rain, don’t get stuck in mud — the musculature in their feet prevents this — and can ‘fuel up’ by eating the bamboo shoots and other nutritious vegetation they encounter as they traverse the landscape.”

An encounter with a KIA war elephant, however, is exceedingly rare. Rajeev Bhattacharyya, an Indian journalist, is among the few who’ve had the pleasure.

While traveling around the unruly India-Myanmar border, he stumbled across a KIA unit trailed by elephants.

Armed with rifles and machetes, the guerrillas were seeking wild elephants in hopes of capturing a few new recruits — essentially drafting more of the beasts into their war.

The Kachin elephant handlers were friendly but guarded. “But they did say that the demand for elephants is huge,” Bhattacharyya says, “perhaps because of the ongoing war.”

Not so long ago, in a similar landscape, another Southeast Asian guerrilla faction relied on elephants to elude invaders.

Loaded down with rice sacks and ammo, pachyderms supplied the Viet Cong in their struggle against US forces. Mud trails in Vietnam would destroy a jeep’s chassis. But they were easy to traverse on elephant back.

Still, the communist forces found that elephants were easily spooked by gunfire. According to one former People’s Army of Vietnam officer, Lt. Pham Van Phan: “They’re not easy to manage … especially when there’s fighting going on.”

In an account preserved in the book “War Elephants” by John M. Kistler, the Vietnamese officer notes that troops can become deeply devoted to these animals. They would hesitate to abandon their elephants even during intense battles.

American forces, however, were not so sentimental. US fighter jets and attack choppers would often rain down munitions on any elephant suspected of aiding the communists.

A New York Times story from 1966 tells of such a massacre: “United States Marine pilots also strafed a column of eleven pack elephants … five of the animals were killed and five others seen to fall.”

Once the US-Vietnam War ended, there were practically no war elephants in service around the world — except for the guerrilla zones in Myanmar.

These conflicts, which pit indigenous guerrillas against Myanmar’s army, have simmered since the 1960s. The nation’s recent transformation from dictatorship to democracy has done little to tame these wars.

In fact, Myanmar’s wars are getting worse.

Army strikes in the unruly hinterlands have actually intensified since a 2015 general election, widely celebrated as the end of tyranny in Myanmar. The military is even trying to build a stockpile of drones.

As these wars persist, the elephants soldier on.

Today, there are no proper combat elephants left. They were rendered helpless centuries ago by cannons. Historical accounts indicate that an elephant will survive a few musket-fired bullets. But not a cannonball.

Once assault rifles came along in the 20th century, the combat elephant’s fate was sealed. An Asian elephant is literally as big as a barn. They make easy targets for even the clumsiest recruit with an AK-47.

While battle elephants are no more, Myanmar, also called Burma, is a fitting last stand for its less-deadly counterpart: the logistical war elephant.

Myanmar was perhaps the last place where combat elephants went head-to-head with soldiers on the battlefield.

The year was 1825 and the beasts belonged to a millennium-old Burmese royal dynasty. They were helping the royals fend off a distant invader: British imperial troops.

This resistance ultimately failed. The British brought a weapon the Burmese had never seen — rockets — and the elephants were slaughtered in deafening bursts of flame.