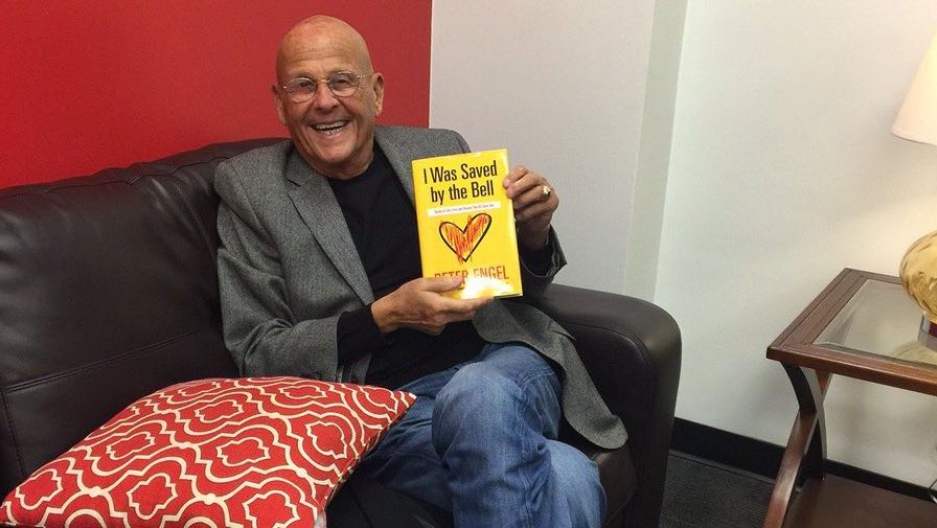 Peter Engel recently wrote a memoir about his life in the television business. In it, he talks about his time as executive producer of the popular TV show, "Saved by the Bell."

So many Gen Xers and other children of the ’90s and their parents spent part of their Saturday mornings following them on the popular TV show, “Saved by the Bell,” set at the fictional Bayside High School in Palisades, California.

The series, which ran for a handful of years beginning in 1989, was memorable for its colorful characters, funny plotlines and its willingness to delve into tough subjects.

Its executive producer, Peter Engel, writes about that and more in his memoir that came out late last year, titled "I Was Saved by the Bell: Stories of Life, Love, and Dreams That Do Come True."

Engel worked on a number of similar teen-oriented shows that followed on NBC — including some spin-offs of "Saved by the Bell" — and he went on to produce other hits, too, like “Last Comic Standing.” Later, when he left Hollywood, Engel did a stint as the dean of the School of Communication and the Arts at Pat Robertson’s Regent University in Virginia.

But Hollywood is where he spent the bulk of his career, from the ’70s through the early 2000s. For him, it’s not hard to pinpoint the very moment that he realized the television business was his calling.

“I was 12 years old on Central Park West in Manhattan," he said. "It was 1948, and we saw the Milton Berle Texaco Star Theatre, and I decided this was for me. I needed to be part of this, I had to be in television and I fell in love.”

Naturally, “Saved by the Bell” was a bright spot in his career. In his book, Engel tells about how the show came to be.

It began with Brandon Tartikoff, the “young, mercurial” president of NBC; he brought Engel to the network. Tartikoff, Engel said, was like a “little younger brother to me. And he said we can do great things.”

For starters, Tartikoff had a vision for a prime-time pilot on NBC, which was inspired largely by his sixth-grade teacher in Long Island: Miss Bliss, who had a major impact on his life. The resulting pilot, “Good Morning, Miss Bliss,” had Jaleel White, who played Steve Urkel on "Family Matters," and Brian Austin Green, well-known for his role as David Silver on “Beverly Hills, 90210.” But none of the kids who wound up on what later was reframed as “Saved by the Bell.”

Ultimately, the NBC prime-time pilot was a no-go, so instead, they produced 13 episodes of “Good Morning, Miss Bliss,” for the Disney Channel. That experiment, too, was relatively short-lived. “It wasn't a failure, it wasn't a success and Disney chose not to go forward.”

So, the show evolved again, this time for teen programming on Saturday mornings: “Brandon [Tartikoff] wanted to add more kids and remove the teacher,” he said.

“Saved by the Bell” needed to fit in somewhere between cartoons that also aired during that time slot and regular prime-time comedy. So, everything was intentionally bright and flashy. Also, Engel and Tartikoff decided that no scene would last more than two and a half pages, in keeping with the staccato rhythm of the cartoon lineup, which sort of went “pop, pop, pop, pop.”

For Engel, “Saved by the Bell” was special. “Well, first of all, the cast was unbelievable. They were magic from day one.” One of the reasons it caught on so well had to do with the fact that they were playing their own ages, he said.

The quirky Dustin Diamond (Screech) arrived at "Saved by the Bell" somewhat serendipitously. After the second episode, “I said to [Mark-Paul] Gosselaar, I said, ‘What’s with Dusty, he’s such a kid.’ He said, ‘Well, he's only 11.’”

The show tackled some serious themes, such as about the environment — notably, an oil spill in 1992 — drinking and driving, drugs and death. Probably “Saved by the Bell’s” most famous scene was about drug addiction — in this case, caffeine pills.

Engel, who wrote that episode with Tom Tenowich, his top producer, said it was about “How kids put pressure on themselves.”

The character at the center of the drama was Jessie Spano (Elizabeth Berkely), an overachiever whose dream was to attend Stanford. She had a bunch of extracurricular activities. But the SAT hadn’t turned out the way she wanted. And, she began taking caffeine pills to get through it all.

“When Tom and I wrote it, we wrote it as speed ... real, real drugs, and we're in the meeting with the network standards people and they go, ‘Oh no way.’ And so Tom said, ‘How about caffeine pills’ … I didn't even know what caffeine pills were. I never heard of them. And I just wanted to get the heck out of the meeting. So I said, ‘OK, caffeine pills.’ We never changed a word of the script, and that's why we were made fun of by people ... it looked like she was on heroin.”

Nevertheless, the studio audience was rapt, crying, just as actors Mark-Paul Gosselaar (Zack Morris) and Elizabeth Berkley (Jessie Spano) were in the scene.

“Of course, I didn't write 17 Jessies. ‘Jessie, Jessie,’” which was ad-libbed by Gosselaar. “But the impact that [scene] had, [even] on my own daughter, it was unbelievable.”

“Look, we broke barriers. … I'll tell you a funny story. One of the greatest fans of ‘Bell,’ we found out, was Lin-Manuel Miranda and in June, I was his guest in the sixth row on the aisle to see ‘Hamilton,’ and afterward we met onstage.”

Miranda repeated a line from Engel's one cameo on "Saved by the Bell," which took place on a golf course in Palm Springs.

“And we hugged and we talked, and he said to me, ‘You really inspired me.’ I said, ‘Well, I'm inspired by you. Look at this cast. George Washington is black, and you're Puerto Rican ... How did that happen?’ He said, ‘You inspired me.’ He said, ‘You won the first diversity award.’ I said, ‘I did.’ If I only impacted my three children and Lin-Manuel Miranda then it was a success, but I didn't. We impacted a whole generation in 85 countries.

“People forget that no comedy had ever gone to more than six English-speaking countries. But every kid went to school somewhere, and they all wanted to see how the California kids lived.”