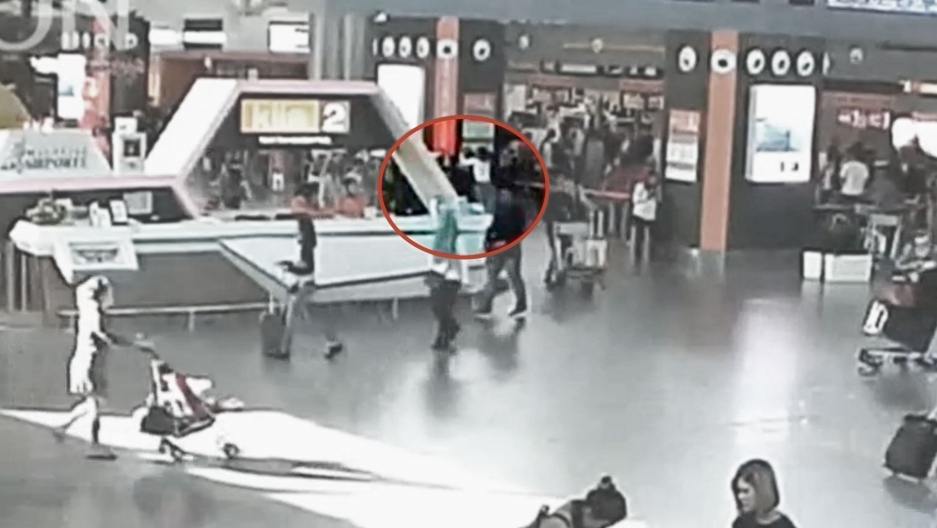 Kim Jong-nam died on Feb. 13 after being attacked at Kuala Lumpur International Airport by two women, who are seen on CCTV footage shoving something in his face.

North Korean leader Kim Jong-un's half brother was assassinated with a lethal nerve agent manufactured for chemical warfare and listed by the United Nations as a weapon of mass destruction, Malaysian police said Friday.

Releasing a preliminary toxicology report on Kim Jong-nam's murder at Kuala Lumpur airport, police revealed the poison used by the assassins was the odourless, tasteless and highly toxic VX.

The news brought condemnation from South Korea, which slammed the use of the nerve agent as a "blatant violation of the Chemical Weapons Convention and other international norms."

Experts in the South said Friday that North Korea has up to 5,000 metric tons of chemical weapons stockpiled, including a supply of VX.

Kim died on Feb. 13 after being attacked at Kuala Lumpur International Airport by two women, who are seen on CCTV footage shoving something in his face.

He suffered a seizure and was dead before he reached hospital.

An autopsy revealed traces of VX — a fast-acting toxin that sparks respiratory collapse and heart failure — on the dead man's face and in his eyes.

Tiny amounts of the poison are enough to kill an adult, whether it is inhaled or absorbed through the skin.

"I am outraged that the criminals used such a dangerous chemical in a public area," said Malaysian Environment Minister Wan Junaidi Tuanku Jaafar.

It "could have caused mass injuries or even death to other people."

One of the two women arrested after the attack fell ill in custody, police said, adding she had been vomiting.

National police chief Khalid Abu Bakar has previously said the woman who attacked Kim from behind clearly knew she was carrying out a poison attack, dismissing claims that she thought she was taking part in a TV prank.

"The lady was moving away with her hands towards the bathroom," Khalid said earlier this week.

"She was very aware that it was toxic and that she needed to wash her hands."

Khalid said Friday experts would sweep the busy airport terminal where the Cold War-era attack took place for traces of the toxin as well as other locations the women had visited.

"We are investigating how [the VX] entered the country," he told reporters.

However he added that "if the amount of the chemical brought in was small, it would be difficult for us to detect."

A leading regional security expert told AFP it would not have been difficult to get VX into Malaysia in a diplomatic pouch, which are not subject to regular customs checks.

North Korea has previously used the pouches "to smuggle items including contraband and items that would be subjected to scrutiny if regular travel channels were used," said Rohan Gunaratna, the head of the Singapore-based International Centre for Political Violence and Terrorism Research.

Detectives are holding three people — women from Indonesia and Vietnam, and a North Korean man — but want to speak to seven others, four of whom are believed to have fled to Pyongyang.

One man wanted for questioning, who is believed to be still in Malaysia, is senior North Korean embassy official Hyon Kwang Song.

Police have acknowledged that his diplomatic status prevents them from questioning him unless he surrenders himself.

North Korea, which has not acknowledged the dead man's identity, has vehemently protested at the investigation, saying Malaysia is in cahoots with its enemies.

He was told Friday to shut up or face the prospect of being kicked out of the country.

"The ambassador has been informed of the process involved (in the police investigation) but he continues to be delusional and spew lies and accusations against the government of Malaysia," Malaysian Foreign Minister Anifah Aman said.

A senior Malaysian government official said Kang had been shown a "yellow card," adding, "If he repeats the baseless allegations, he will be expelled."

The only known function of VX is as a chemical warfare agent and the US government's Centers for Disease Control and Prevention describes it as the "most potent" of all nerve agents.

VX was used by Japan's Aum cult in the 1994 murder of an office worker in Osaka, and in the attempted murder of two other people.