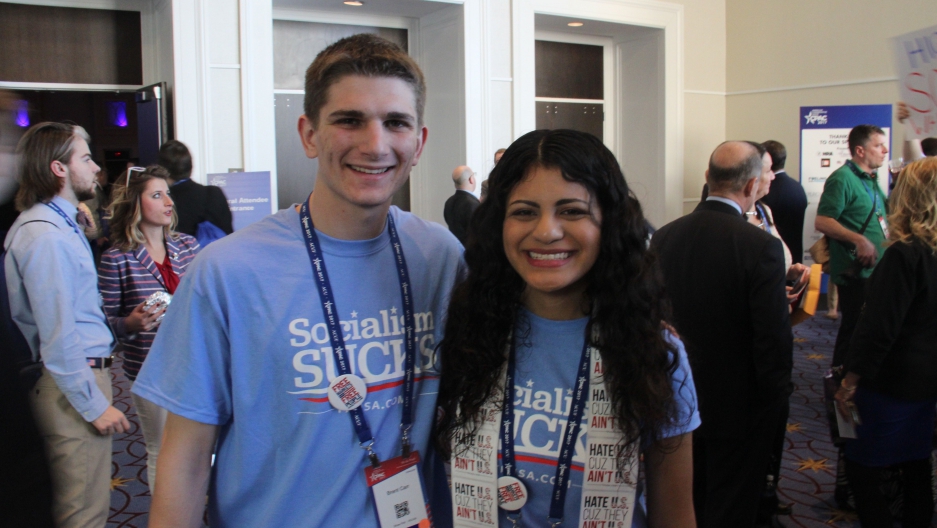 Students Brent Carr of Mobile, Alabama, and Karina Lopez of Los Angeles, hand out buttons and stickers promoting the conservative organization Turning Point USA. The organization brought students from across the country to attend this year's Conservative Political Action Conference.

While debating how to reach younger voters, speakers at the Conservative Political Action Conference said Thursday that if millennials were better educated and more informed, they would not support candidates like Vermont Sen. Bernie Sanders.

"FREE stuff vs. FREE-dom: Millennials' Love Affair with Bernie Sanders?" was the title of the only panel discussion focusing on younger voters at the annual conference held this week in Oxon Hill, Maryland.

“If you look at millennial attitudes, they are much more favorable to socialism than any generation previously. They’re also less knowledgeable in core American civics than previous generations, and they’re even less patriotic,” said Rep. Ron DeSantis, a Republican from Florida. “Without that foundation, some of that stuff may sound more alluring.”

Even if younger participants were not included on the panel to discuss how to convince their peers to vote Republican, CPAC has historically been an important event for young conservatives. Students and recent college graduates are a key group there each year, and many sessions focus on how to network and begin a career in conservative politics.

Students Karina Lopez, 18, of Los Angeles, and Brent Carr, 21, of Mobile, Alabama, met at CPAC while handing out stickers and buttons; they wore shirts saying “Socialism Sucks,” which were stylized to look like the Sanders 2016 campaign logo. Carr and Lopez said they both volunteer with the organization Turning Points USA, a group that promotes free markets and limited government on college campuses.

Lopez attended CPAC last year and jumped at another opportunity to hear from conservative speakers and network with like-minded people.

“I’m [from] Los Angeles, a deep blue state, most of my friends are liberals,” said Lopez. “I’ve actually lost a few friends because of my positions. ... It’s tough.”

Both Carr and Lopez said they understand why some young people struggle to support conservative candidates, but they believe that organizations like theirs will be able to help the conservative movement gain ground on college campuses.

Andrea Raffle, 24, came to CPAC with a conservative advocacy group, Future Female Leaders. Clad in red and white, elephant-print skirts, Raffle and her colleagues waited in line to high-five Wisconsin Gov. Scott Walker, an event that was live-streamed on Facebook.

Raffle worked for Republican presidential candidate Carly Fiorina’s super PAC last year and considers the former Hewlett-Packard CEO to be a role model. She said the conservative movement has more to offer young women than they many may realize.

"As [Fiorina] likes to say, 'A feminist is a woman who lives the life she chooses, whether she is a CEO or a stay-at-home mom,'" said Raffle.

Ronald Fodor was excited to see all the young conservatives at CPAC, especially, he said, because his children do not consider themselves conservative. He said his daughter cried when Donald Trump won the presidency in November. Fodor, who is the mayor of Slippery Rock, Pennsylvania, attributes the political stance of his children to the fact that they are young and live in an urban area.

“They’re young, they’re idealistic. When I was their age, I was the same. I switched when I was 29,” said Fodor. “I know what I believe better now, I’m more mature.”

Last November, 37 percent of millennials voted Republican, according to data from the Center for Information and Research on Civic Learning and Engagement. Republicans will hope to replicate last year’s success in 2020, and CPAC participants hope they will contribute to improving that percentage.