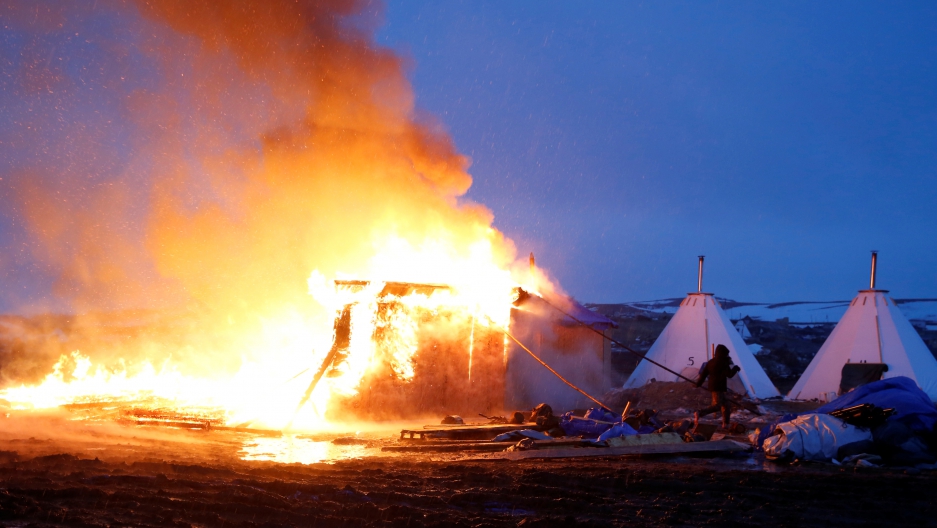 A building burns after it was set alight by protesters preparing to evacuate the main opposition camp against the Dakota Access oil pipeline near Cannon Ball, North Dakota.

The camp at Standing Rock was shut down Wednesday after nearly a year of tribal members and supporters camping out there in opposition to the Dakota Access Pipeline.

The move to clear the camp comes as construction on the oil pipeline resumes after President Barack Obama halted it in December. President Donald Trump reversed that suspension as one of his first executive orders upon taking office in January.

Native American journalist Jenni Monet and a dozen other reporters from local and national news outlets were stuck around the camp Wednesday to witness the final standoff between the Morton County deputies and the nearly two dozen demonstrators who remained at the camp. Monet has been at Standing Rock since September 2016.

While the small group who remained at the camp tried to decide whether to stay and be arrested or leave, Monet had questions for state and local law enforcement about media access. She and other independent media were told they needed credentials issued by the governor of North Dakota or they would be considered trespassers and face arrest. Monet claims she had those credentials but was told to leave anyway. She was chased by an officer.

"They're chasing journalists!" Monet yelled into her Facebook Live video feed as she and a few others headed for their vehicles.

This isn't the first time Monet faced off with law enforcement while reporting on Standing Rock.

On Feb. 1, Monet was arrested while reporting on a raid taking place near the Standing Rock camp. Monet was booked and charged with criminal trespass and intent to riot — serious charges that could result in jail time and a fine totaling thousands of dollars. Monet is a freelance reporter whose work has appeared in YES! Magazine, on PBS News Hour and PRI. While mainstream media outlets have covered the DAPL protests from time to time, Monet remained as part of a core group of freelancers and Native journalists providing regular coverage.

“My arrest has been one big distraction from what I’m here for, which is to cover the pipeline protests and the ongoing battle to stop it. I am calling and demanding that my charges be dropped,” she said.

Monet insists she was doing her job as a journalist and was complying with officers’ requests to vacate the area known as the Last Child Camp. Her arrest was a shock to Monet because she felt she had maintained a good relationship with the department and that her reporting was fair to both sides.

“My coverage is a testament to the kind of well-rounded voice that I’ve given to this movement where all sides are represented.”

You can read some of her coverage here.

Monet says she sees a pattern of misinformation coming out of the sheriff's office, not only related to her arrest. For example, Red Fawn Fallis, a demonstrator at the camp, is accused of attempted murder of a police officer. According to Monet, no gun has been produced and the only evidence so far has come from demonstrators at the camp.

Recently, a few folks involved in the demonstrations were questioned by the FBI in what the agency calls “knock and talk” interviews. “I know many people are interested in how this peaceful demonstration has been characterized as the work of a band of terrorists,” Monet says.

North Dakota's Governor Doug Burgum met with protesters at the camp and Standing Rock Sioux Chairman Dave Archambault in January to talk about a way forward and expressed concern for those left at the camp while spring flooding loomed.

"We want to work with Chairman Archambault and the camp leaders and try to figure out a way to reduce the level of conflict and, at the same time, solve the public safety issues we have relative to the flood," Burgum said. "How do we take steps together?"

"The governor listened to our concerns, and that goes a long way in showing his willingness to listen and learn ... from all sides, how we can help and rebuild and move forward," said Archambault. "This has been very trying on everybody."

Mark Trahant, a veteran journalist, believes the Morton County Sherriff’s Office now feels emboldened to arrest and charge demonstrators under the new administration. The total cost to taxpayers, according to the sheriff, is around $32.9 million. People living around the Standing Rock reservation want the Backwater Bridge opened and things to “go back to normal.” With the bridge reopened, people can get to local businesses like the Prairie Knights Casino — a major source of revenue for the tribe.

One of the frustrations the sheriff's office has had is not being able to distinguish who is a journalist. Some journalists have become part of the protests — something organizations like the Native American Journalists Association and the Society for Professional Journalists have spoken out against.

“Native journalists: Please stop participating in DAPL actions and refrain from reporting your own position on the pipeline. Being a professional journalist means accepting ethical disciplines designed to build trust with the public. One of the most important is providing unfiltered and unbiased information so audiences can make up their own minds on a topic,” said Tristan Ahtone, a Kiowa journalist from Oklahoma who's contributed to NPR, Al Jazeera and other outlets.